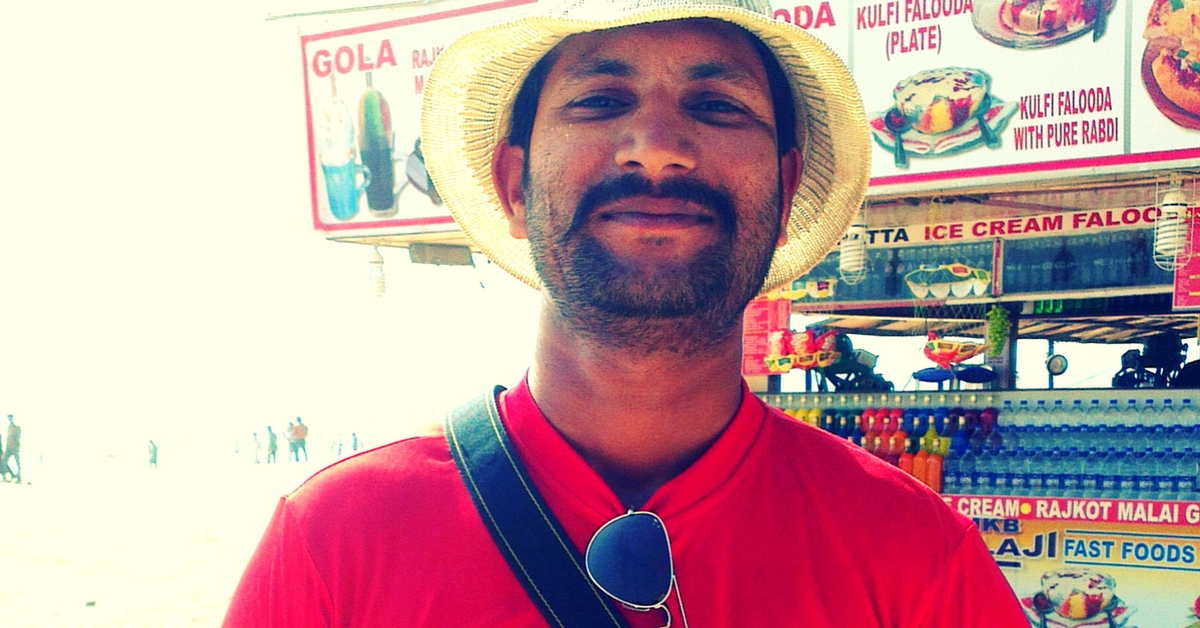 Bunty Rao, the volunteer lifeguard, is often the go-to person during any emergencies on Juhu Beach.

In the city of Mumbai, which runs at an overwhelmingly frantic pace, money is of the utmost importance. In this race, managing to take care of yourself and your family is a task, and sparing a thought to strangers, is often out of the question. Social networking is more important than getting to know the person sitting next to you. Rarely do we come across someone who makes a difference in the lives of people. Those who do, often go unnoticed. This is the story of one such person who survives in a city that cares for no one.

Bunty Rao, a tall man, jauntily chats with his friends, sitting on the sidewalk near the entrance of Juhu beach, watching for clients with hawk eyes. With a Nikon DSLR camera around his neck, and an album of sample photographs in his hand, he jumps to his feet any time someone steps onto the shore, offering to take their photographs against the backdrop of the gorgeous waves.

Were it not for his T-shirt that says “Lifeguard on Duty,” one would assume he is like any other photographer strolling on the beach. But Bunty is anything but ordinary.

Mumbai’s beaches attract thousands of visitors every day, some from the city itself and others, tourists. Some come to gaze at the sea, some to eat and others to drench themselves in the warm, salty seawater. Alongside, hawkers throng the sand, selling balloons, peanuts, popcorn, bubbles, toys, robotic contraptions that claim to predict the future and more knicknacks.

“I’ve been working as a lifeguard with Baywatch Lifeguard Association(BLA) for 16 years,” Bunty says, pointing to a board with the name of the NGO at the entrance. “It is probably one of the last things visitors will see or acknowledge. But this place would not be the same without that signboard.”

Baywatch Lifeguard Association was established by Sayeed Shama, who realised that the security provided by BMC at beaches just wasn’t enough to prevent accidents. He founded an NGO that trained men in civil defense. These men were positioned in different areas of the beach. Apart from the trained lifeguards, BLA also provides first-aid training and practical education on how to deal with emergencies, to hawkers at the beach and regular visitors. “We don’t charge a fee for our services. Everything we do is for free and for the people. We also clean the beach in the mornings,” Bunty says.

BLA believes in teaching people about civic responsibility and spreading awareness, expecting no monetary reward in return, just asking that civilians do their duty.

Bunty has been of great service to BLA. “I’ve saved around 50 lives in the 16 years I’ve worked here. One of the most dangerous times of the year is Ganesh visarjan. People go off into deep areas without caring about their safety,” he says.

There’s a reason why Juhu beach is considered one of the safest in Mumbai. “I stay here till 10 pm every day to make sure things are okay. People call me in case of any emergency at the beach. There have been times when the beach is absolutely crowded and no one but me watches over the people. I’ve even featured in several newspaper articles,” he reveals with a hint of pride.

Bunty wasn’t always in Mumbai, though. He made this city his home over the years.

“I came to Mumbai from Jamshedpur, Jharkhand, several years ago, leaving behind a job at SAP with the hope of earning a living. I always had a passion for photography and that passion was my saving grace in this city. Initially, I dabbled in photography, till I landed the job of assisting in the making of a documentary. I also assisted in Insaan and Bewafa. Meanwhile, I pursued photography professionally by conducting photo-shoots at parties, weddings and corporate events. I even ventured into videography and making documentaries,” he said.

Naturally, the question of earning enough to survive in this city arises. Bunty earns Rs 500–600 per day, which sustains his family, who live in Madh Island.

That’s Bunty Rao, who doesn’t think twice before diving into the sea to rescue someone in danger. Respect sustains this unsung hero.

His sense of responsibility drives him to make a difference every day. Bunty has never forgotten his dreams or his passions. He carries them forward and integrates them into his life the best he can. He is happy and content with his work and his life.

The tide begins to change as the sun goes down, the waters and the wind cool off, coconut trees sway in the early evening breeze. A whole new set of people flock to the beach as the others make their way home. The day draws to a close, but for Bunty, there’s no stopping. He gets up from his seat, alert and energised, keeping vigil for anyone who might possibly need his help. He’s the one the city needs, but he’s the one who goes unnoticed.