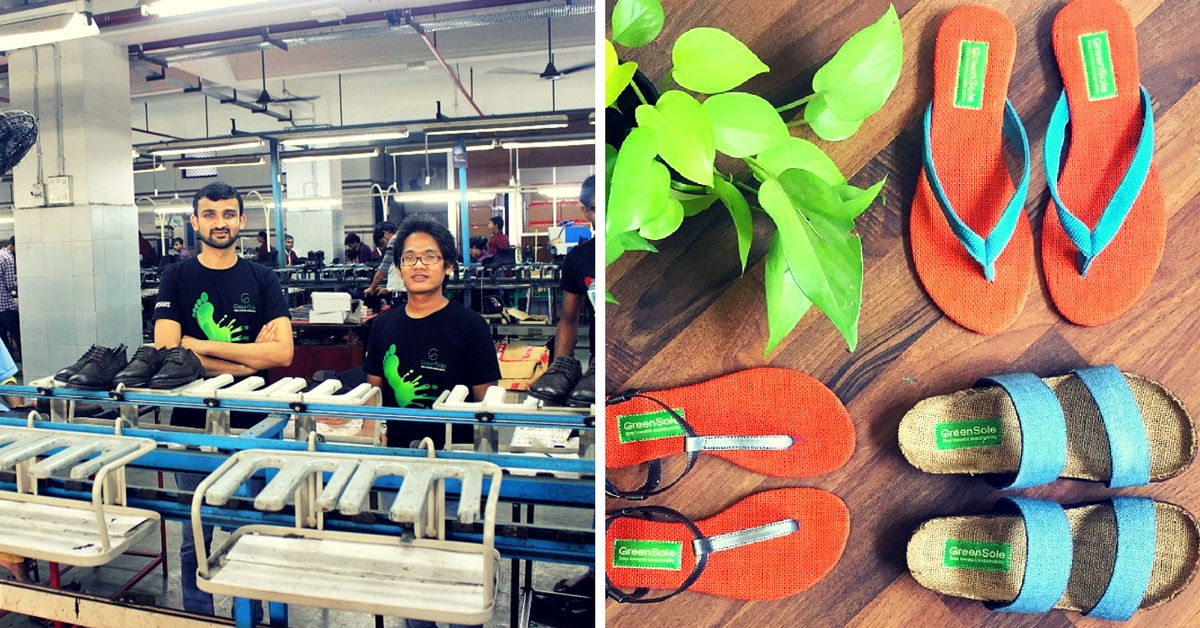 Discarding your old shoes? Ever thought of how the non-biodegradable pair will reach landfills and remain there for ages, adding to carbon emissions and polluting the environment? This is what you can do instead.

Professional athletes Shriyans Bhandari and Ramesh Dhami used to discard at least three pairs of shoes every year before they came up with a brilliant idea that is not only environment friendly and economical but has the potential to do a lot of social good.

They started GreenSole – an organization that refurbishes old shoes into comfortable and trendy footwear for hundreds of children who walk to school.

“Shoes become unfit for running quickly and we had to throw ours away even though their soles used to be in good condition. The shoes were expensive and we were stuck with this problem for a long time. After discarding many pairs and months of brainstorming later, we came up with GreenSole. Initially, we thought we would just reuse those shoes and make footwear for personal use. But the idea grew into a social business venture and we decided to help underprivileged children by providing them with refurbished shoes,” says Shriyans.

Shriyans and Ramesh started their venture in December 2013 with just their own shoes. Today, GreenSole has 17 corporate partners to support its initiative. These companies conduct collection drives in their offices and pay GreenSole to refurbish the shoes and donate them in villages. Additionally, the organization conducts collection drives across the country on its own too. It has tied up with many schools and colleges and installed drop boxes in public places like parks.

Once the shoes reach GreenSole’s manufacturing unit in Navi Mumbai, the team washes and disassembles them to separate the soles and uppers.

They cut the soles according to the required sizes, and use them to make the base of the slippers. The uppers are used to make slipper straps and the laces used to pack the footwear for donation. They send the shoes that still have some life left to them to athletes at the Sports Authority of India (SAI), in exchange for their old shoes. “Instead of melting the shoes like many shoe manufacturers do, we refurbish them so there is minimal carbon emission,” says Shriyans.

According to him, about 35 crore pairs of non-biodegradable shoes are discarded every year, worldwide. At the same time, 1.5 billion people in the world currently do not have footwear and millions of them suffer from diseases contracted because of unprotected feet each year. To fight this problem, GreenSole first selects the villages to work in, conducts surveys on how many school-going children need slippers, gets their sizes, and then provides what they need.

These are villages located in Maharashtra and Gujarat. The organization has some partner NGOs as well, which share knowledge about potential beneficiaries.

With a core team of 10 people and temporary labour that varies based on orders, GreenSole has donated footwear to over 10,000 people to date. According to reports, manufacturing each pair of shoes involves 360 different steps and about 30 pounds of carbon emissions. So, by recycling old shoes and preventing them from reaching landfills, GreenSole is living up to its name and helping conserve the environment.

Shriyans adds that the organization has also started retailing the refurbished footwear at low costs. People can help them raise funds by purchasing the shoes either for themselves or to donate to others. Individuals can also contribute by donating shoes or money.

Donors can send their shoes via courier. The organization accepts virtually all kinds of footwear except children’s shoes and shoes/sandals with heels.

“We also conduct awareness campaigns about the benefits of wearing footwear at places where we go to donate shoes. We make sure that kids are not going to school barefoot. It is a great feeling to see them wearing those slippers, running and playing,” says Shriyans.

The 21-year-old did his Master’s in entrepreneurship from the US before returning to India and setting up GreenSole. His co-founder Ramesh is a national level marathoner who comes from Uttarakhand.

They met during their running sessions at Priyadarshini Park in Mumbai and became close friends. The duo funded the company in the beginning with cash prizes they won at college events – from Rs. 3 lakh at the IIT Mumbai Eureka competition, a business plan competition, to Rs. 2 lakh at R-Idea National B-plan.

Their innovative idea was appreciated everywhere. They now have two industrial patents for their designs and ideas.

Shriyans and Ramesh are doing their bit for the environment and for helping the underprivileged. You can do your share too by simply contributing to their efforts with shoes that you would discard anyway. You will help change lives! Donate a walk or purchase footwear here.