Thinking about the movement usually brings the faces of eminent leaders to our minds - Mahatma Gandhi, Jawaharlal Nehru, Bhagat Singh, to name a few. But did you know that several symbols played an important role in the movement too? Here's some information on them!

The Indian Independence movement  was a 190 year long struggle for freedom from the British Raj. It finally culminated in India becoming independent on August 15, 1947.

Recall the history of independence and the faces of eminent leaders will come to mind – Mahatma Gandhi, Jawaharlal Nehru and Bhagat Singh, to name a few. But do you know that several symbols played an important role in the movement too?

This Independence Day might be a good opportunity to learn about them:

Some of you may remember reading about the ‘Swadeshi Movement’ in your history textbooks. It took place in 1905, after Bengal was partitioned by Lord Curzon, and continued until 1911. The movement was chiefly organised by the trio of Bal Gangadhar Tilak, Bipin Chandra Pal and Lala Lajpat Rai. The Calcutta Flag, designed during the course of this movement,sought to unite people from different religions, castes, etc.

It was designed by Sachindra Prasad Bose and was unfurled on August 7, 1906. 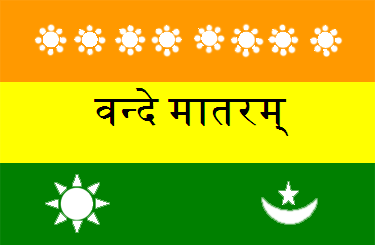 Something extra: The eight lotuses on the top band of the flag depict the eight provinces of India. The flag saw several variations over the years.

The Azad Hind or ‘Free India’ movement originated outside of India in the 1940s. Its chief architect was Netaji Subhash Chandra Bose. He sought to ally with the Axis powers of WW II and free India with the use of arms and ammunition.

This flag was used as the official emblem of the Azad Hind Fauj, more commonly known as the Indian National Army. Although the movement officially ended with defeat at the hands of the British, and the apparent death of Netaji (he went missing), the struggle (and the flag) indirectly managed to spark a series of revolts across India that played a major role in attaining freedom.

Something extra: Although the Azad Hind Flag was the official symbol of the armed resistance, it was often interchangeably used with the Swaraj flag of 1931.

Search for a picture of Mahatma Gandhi on the Internet and you’re bound to stumble on to a photograph of him spinning khadi on his trusted charkha. To Gandhiji, the charkha embodied several things: Swadeshi, self sufficiency and even inter-dependency!  Soon, the charkha was used all across the country as a major symbol of the National Movement.

Furthermore, it was also used as a symbol of boycott of foreign goods. Something extra: The charkha symbol was used in several flags too (like the one shown above). This includes the Gandhi flag of 1921 too, which was released at the Indian National Congress meeting of 1921.

According to some stories, Gandhiji kept a sculpture of the three monkeys with him, and this was one notable exception to his otherwise simple, no-possessions lifestyle. Soon, the sculpture became popular across India. Something extra: Although the three monkeys were popularised by Gandhiji  in India, they actually originate from Japan. Their names are Mizaru (the one covering his eyes), Kikazaru (covering his ears) and Iwazaru. Also, a larger representation of them is prominently located in the Sabarmati Ashram in Gujarat.

Salt, or to be more precise, it’s production, was a powerful symbol used by several Indians against unjust British taxation. It was most notably used in the 1930 civil disobedience movement, which began with the Dandi March. The Dandi March saw Gandhiji marching from Sabarmati to Dandi on foot, where he broke the law by making his own salt.

Many people across the country followed suit, and broke the salt law. Something extra: What exactly was the oppressive Salt Tax? The India Salt Act of 1882 gave the government monopoly over the collection and manufacture of salt. There was also a tax of Rs 1-4 on every 82 pounds of salt.