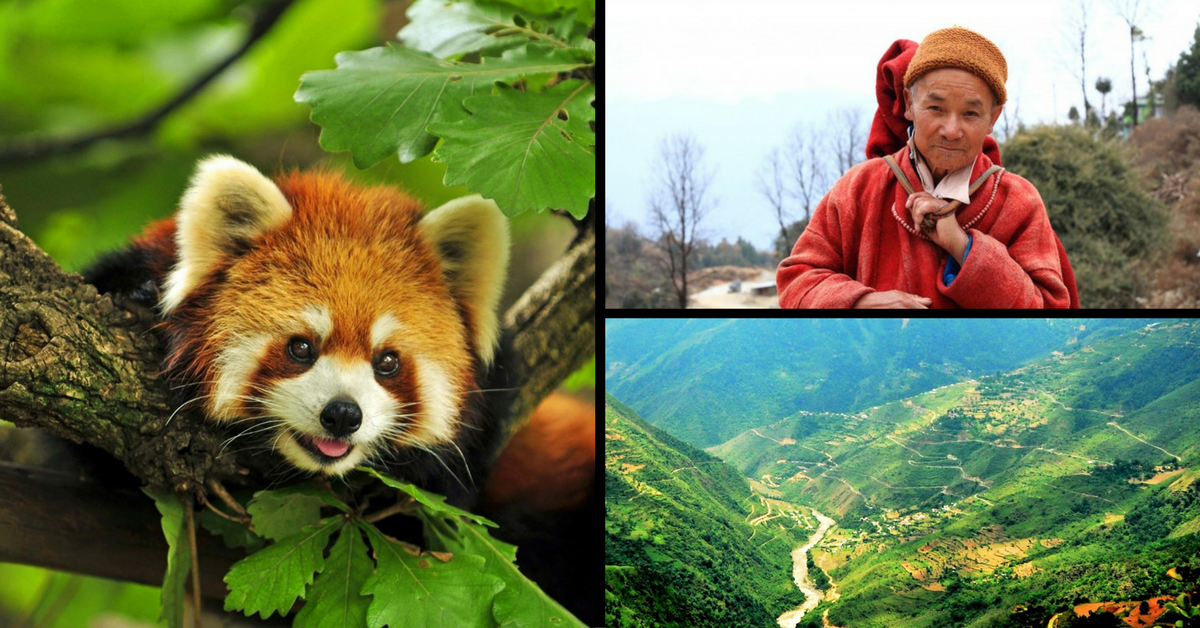 Often referred to as ‘the land of the dawn lit mountains’ , Arunachal Pradesh’s extensive geographical diversity, climatic conditions, and vibrant wildlife makes it one of the richest biodiversity and heritage spots in the country. It is the only state that can claim to have four major varieties of the big cats in its jungles- tiger, leopard, clouded leopard and snow leopard as well as lesser feline species like the golden cat and the marbled cat. Also, there are seven species of primates, including the takin, that can be found only in Arunachal Pradesh. Each district of the state has its own exclusive variety of orchids and one of Asia’s largest Orchidarium is located at Tipi in Arunachal Pradesh.

However, much of its lush forested landscape has been altered by logging, hunting, and the indiscriminate expansion of agriculture. Habitat destruction due to hydropower projects and excessive extraction of wood for fuel has become the biggest threat to many species, including the Red Panda that is found only in the Eastern Himalayas.

This is the story of how two tiny hamlets in Arunachal’s Pangchen Valley are turning the tide on ecological degradation by making conservation an intrinsic part of their lifestyle.

Pangchen Valley lies near the settlement of Zemithang in the remote northeastern corner of Arunachal Pradesh. The striking biodiversity of the valley includes the Red Panda, the Leopard and the critically endangered Black Necked Crane, a winter visitor to the valley.

The inhabitants of the valley, Monpas (one of the major tribes of western Arunachal Pradesh), are the ideal guardians of this remote but beautiful mountain landscape.

Buddhists who revere the Tawang Monastary as the fountainhead of their spiritual lives, Monpas have a rich culture and tradition of conservation. They depend largely on agriculture and livestock rearing for their livelihood and generally refrain from hunting

In 2005, WWF-India initiate a conservation programme in the eastern Himalayas in 2005. Two districts in Arunachal Pradesh — Tawang and West Kameng — were earmarked as focal areas. As a result of the awareness created by the WWF-India, two villages in the Pangchen Valley — Lumpo and Muchut — decided to work towards providing a safe and secure habitat to the Red Panda.

Cousin to the more celebrated giant panda, the Red Panda is astonishingly agile, has a sweet tooth and uses its bushy tail as a wraparound blanket in the chilly mountain air.

It is listed as ‘vulnerable’ in the International Union for Conservation of Nature (IUCN) list of threatened species and also under the Schedule I of the Indian Wildlife (Protection) Act 1972.

The Red Panda lives in deciduous and conifer Himalayan forests mixed with bamboo undergrowth at an altitude of 2200 to 4800 metres. The villages of Lumpo and Muchut, located just south of China’s Tibetan Autonomous Region, fall precisely within this range and hold immense importance in terms of critical biodiversity found in the region.

You May Also Like: Time is Running Out for These 16 Endangered Wildlife Species in India. Learn More About Them.

Both Lumpo and Muchut lie in the Tawang district and are not connected to the national electricity grid. As a result of the power supply being both limited and erratic, people are dependent on firewood for cooking and heating purposes. As a result, the unregulated felling of trees continued for a long time, until the villagers woke up to the reality that springs were drying up, rainfall was decreasing and summers were getting warmer every year.

As a wake-up call, the villagers formed the Pangchen Lumpo Muchut Community Area Conservation Management Committee with the help of WWF-India in 2007. The village panchayats endorsed this initiative that was targeted at nature conservation and socio-economic development of the forest-dependent tribal population.

“We felt the need for conservation as our generation saw the decline in numbers and species over the years as we grew up. For instance, approximately, 20 years ago, snow leopards were commonly seen around the Shagro Delemzur grazing grounds. Not anymore.”

The committee divided the community land into two broad zones—a core zone for complete protection of the forest and the wildlife, and a buffer zone for sustainable utilization of available natural resources by the villagers.

A ban on hunting and harvesting of trees, shrubs and herbs has been implemented and to ensure that is followed, the residents of the two villages carry out joint patrols twice a year, with technical help provided by the WWF. In this half yearly drill, teams of 10-12 people scan and patrol every inch of the core and buffer zone forests for almost 10 days. Small boards warning those caught hunting or cutting trees have also been put up at several places in the forests. All this has resulted in a significant decrease in poaching in the region.

The villagers, who enjoy an intimate relationship with the forest, are also working to list the biodiversity in the area with the help of GPS-enabled devices. They have already documented the red panda, black-necked crane, musk deer, blue sheep, Monal pigeon, snow partridge, blood pigeon, leopard cat, golden cat and the Himalayan black bear. They are now making a separate list for trees and shrubs, with special focus on medicinal plants.

The plan also helps local villagers to sustainably utilize the forest resources in the buffer one such as firewood, timber and bamboo for household use as well as employment opportunities. The Pangchen Lumpo Muchut Community Area Conservation Management Committee plans to ban this as well once people get an alternative fuel. The felling of trees around the water sources in the area has already been completely banned.

Efforts to explore alternative conservation-friendly livelihoods are already underway. Economic incentives that community-based tourism provides is a great way to promote active involvement of local communities in conservation of forests.

An example is homestay tourism that enables locals to earn from visitors coming to stay for a sight of the elusive red panda. The committee is planning to establish about 10 homestays in the villages.

As all the forests in the Tawang district are legally classified as community forests, the Forest Department doesn’t directly interfere in its management. Instead is helps spread awareness, especially among elders, who decide where jhum cultivation (shifting cultivation) is done. The forest department has also requested the central government to sanction money so that the remotest of villages can get fuel-efficient stoves and LPG cylinders at subsidised rates. This incentive can counteract the cutting down of trees for firewood.

The progress is slow but positive and the villagers believe they can win the conservation battle. Recent surveys in the last couple of years have seen increased sightings of red pandas in the region. Given the rarity of seeing a red panda in the wild, the sightings of so many red pandas, especially of the younger ones, shows the presence of a healthy breeding population. Apart from red pandas, increased sightings of Himalayan black bears, common leopards, Himalayan gorals, serows, large-eared pikas, musk deers and the famed winter guests, the black necked cranes, have also been recorded.

Interestingly, the arrival of the thung thung karma, as the black-necked cranes are affectionately called by locals, is considered auspicious omen for the valley. As a result, the beautiful birds are highly revered and protected from all harm.

The conservation-friendly attitude of the Monpas have ensured that the Pangchen Valley continues to provide a safe haven to the iconic species of the region. Exemplify the guardianship of biodiversity by locals, these tiny villages in Arunachal are among the few truly successful community-based conservation models in India.