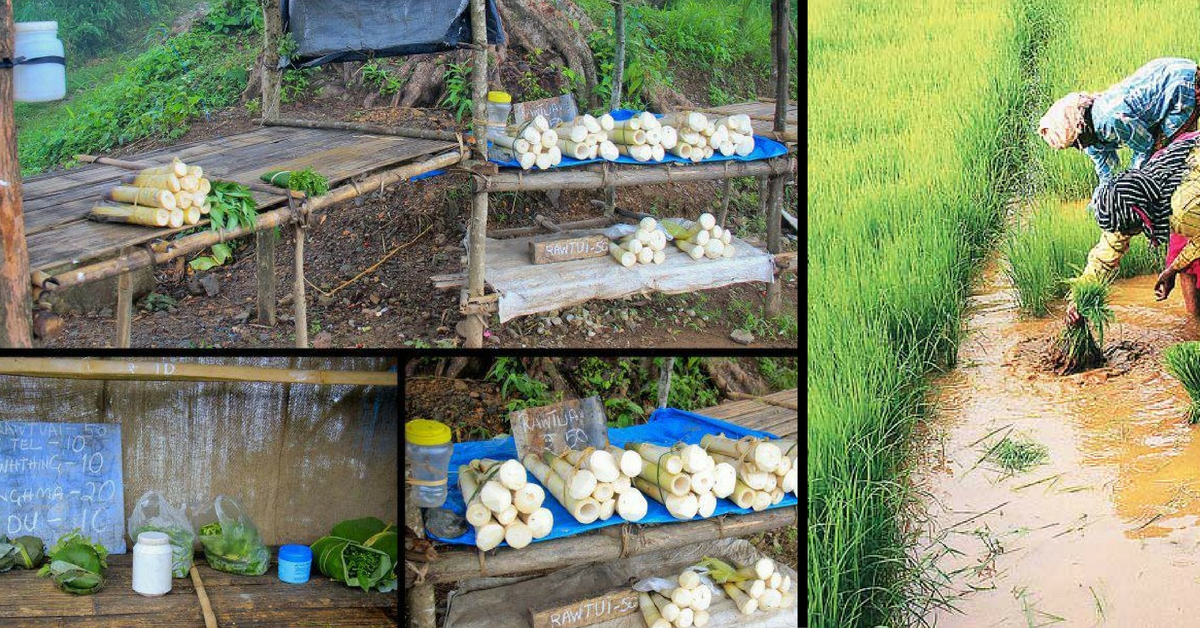 Studded with forested hills that roll across for hundreds of miles, dense bamboo groves, lush paddy fields, sheer cliffs and serene waterfalls, the picturesque, far-flung state of Mizoram is unfamiliar to most Indians. This tranquil state, blessed with breathtaking natural beauty, is also the home to one of the humblest and most honest communities in India, the Mizos.

On a highway along Mizoram, shop owners sustain their living more on the integrity and honesty of their customers than on the little forest produce they manage to collect and sell.

Mizo people are renown for their honesty, hospitality and serene approach to life. They even have a Mizo term for it, tlawmngaihna, that means always being kind, hospitable, unselfish and helpful to others.

Mizos have indigenously developed a novel kind of grassroots commerce that is all about goodwill and honesty – the nghah lou dawr.

The nghah lou dawr (shops without shopkeepers) are a unique way to buy and sell harvested produce. It is a common sight to see these shops along the highway in Seling, about 65 kilometers away from its capital Aizawl.

At these shops, vegetables, fruits, flowers and other produce are kept for selling with a rate list and a container into which customers can put the money. People can be seen going through these items nonchalantly and then grabbing whatever they need before putting the money they owe into the containers lying beside the items.

If they don’t have the exact change, customers can also pick up the change from the same container which says pawisa bawm or pawisa dahna. The owners of nghah lou dawr say,

“We run this shop the whole year. We just put the price list near the vegetable or anything we are selling and people simply pick up what ever they like and put the money in the container. If required, they even take the change from the box themselves. We trust them, they have never failed us. Nothing has ever been lost from our shops.”

Every morning these farmer cum shop owners arrange an array of vegetables, fruits, occasional bottles of fruit juice, small dried fish and even freshwater snails (a local delicacy) in the thatched bamboo huts that double up as shops. They then hang small signboards with the names and prices of the wares written on them using, in most cases, charcoal or chalk. After keeping small payment boxes at their shops, the shop owners leaves for their small jhum (shifting cultivation) farms and gardens. All the while they are at the farm, people crossing the area drop in to purchase the wares and put the desired amount into the box.

With farmhands few and expensive, the small farmers of the region can’t afford to spare any member to stay at the hut and mind the wares. Any money that trickles into the cash container is a big bonus for them. Also, though the nghah lou dawr are few in number and may not earn much, what makes the shop owners happy is the fact that their customers never fail them.

For the locals, the trust that is involved in the transactions with nghah lou dawr is enough to make them want to buy from these shops. Proud of the prevalence of such shops, locals say that it has been possible due to the enduring honesty of people.

“We feel great that Mizoram has such kind of vendors and we often buy from them. It makes us happy, like we’ve contributed to something beautiful. This is how it should be,” say the customers of nghah lou dawr.

It’s wonderful to see how small scale farmers in Mizoram are entrusting their business to the honesty of their faceless customers. A longstanding tradition from the time tribes ruled over individual villages in Mizoram, these simple shops show that where the trust is reciprocated, honesty flourishes.

Also Read: In This Tiny Karnataka Village, Farmers and Shopkeepers Debate over Shakespeare and Kalidas