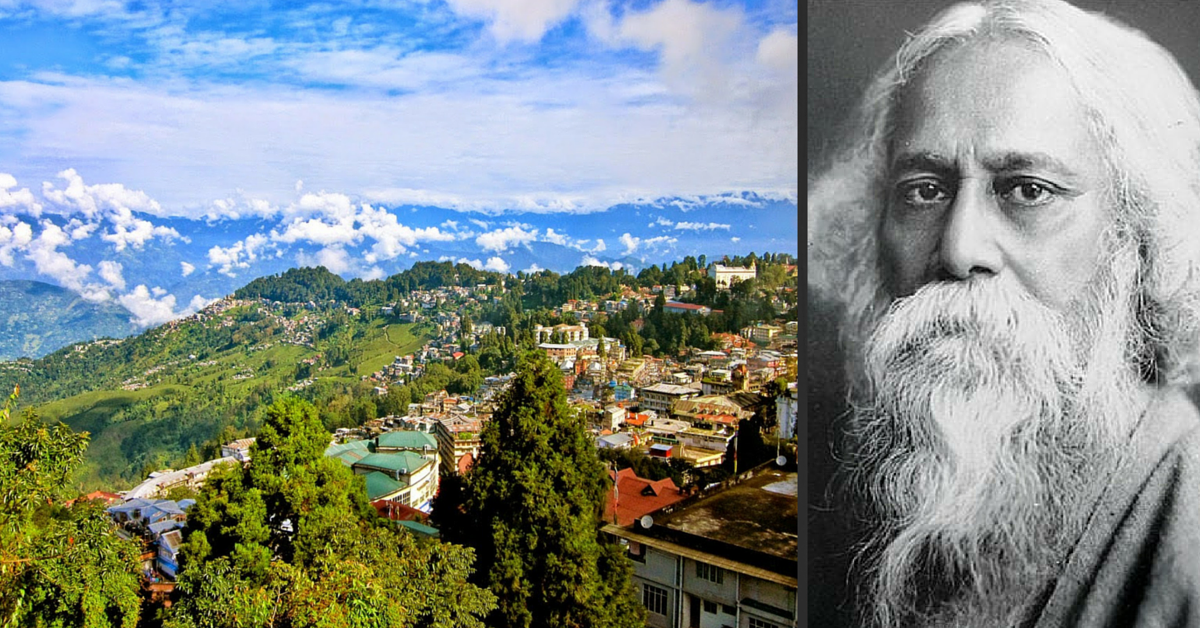 Located at an elevation of 3,500-4000 feet, this Himalayan hamlet is also famous for its verdant tea estates, clear gurgling streams, orchid nurseries, and cinchona plantations.

Although Mongpu does not offer a view of the mighty Kanchenjunga, it has a quaint charm and appeal of its own that attracted Tagore, who first came here on April 25, 1938. Falling in love with the calm beauty of the place, he spent many of his last years at Mongpu on the invitation of his protégé, Maitreyi Devi.

Maitreyi Devi was herself a renowned poet and novelist who wrote the famous Bengali novel Na Hanyate. She also recorded the poet’s stay with her in her delightful book Mongpute Rabindranath, the English translation of which is called Tagore by The Fire Side.

The house where Tagore stayed overlooked sprawling cinchona plantations and a quinine factory. The bungalow had been allotted to Maitreyi Devi’s husband, Dr. Manmohan Sen, who was the director of the quinine factory at the time.

Delighted by the presence of the revered poet in their village, the locals of Mongpu celebrated Tagore’s 80th birthday with great enthusiasm. On Maitreyi Devi’s insistence, Tagore even wrote a new poem – the legendary “Janamadin.” The poet then recited this poem over the telephone from Kalimpong; All India Radio Calcutta broadcast it live all over India. Here are some evocative lines from this beautiful poem.

“In the dusk of this life

Let me fill from the well of beauty

And refresh for one last time my heart, body and soul

Let me cast away all striving, all argument, all suspicion, all fame, all blind ambition.”

There is an interesting anecdote about this historic broadcast. Mr Lionel Fielding was the director of All India Radio’s Calcutta station at that time and he wanted to broadcast Tagore’s poems, recited by the poet himself, live from Kalimgpong. With this in mind, he visited Mongpu several times to meet Tagore and organize the broadcast but the poet refused to see Fielding. Fielding finally related his predicament to Dr Sen who promised to arrange an appointment for him.  Dr Sen then went and asked the poet about his refusal to give Fielding an appointment.

” I don’t like them. They play the harmonium,” was Tagore’s reply. The poet did not like this particular instrument as it could not reproduce the mir, an essential part of Indian music.

“Is that the only problem?” Mr. Fielding asked.

“In that case, as of today, I am banning the harmonium on All India Radio,” was Fielding’s reply.

From that day on the harmonium remained banned from the studios of All India Radio till the mid-1970s. The ban was lifted only after a lot of pressure was exerted on the management of Akashvani by the Harmonium Manufacturer’s Association to reintroduce the instrument.

On his last visit to Mongpu in 1940, Tagore fell seriously ill and had to be shifted to Kolkata. He passed away the next year, leaving behind several of his possessions at the Mongpu residence.  Later on, the bungalow was converted into a museum by the government and named Rabindra Bhavan. The museum displays several priceless memoirs such as Tagore’s original artworks, his handwritten documents and old photographs. Interestingly, the museum also has furniture that was designed by Tagore and carved by his son, Rathindranath Tagore.

The museum caretaker can be found chanting the poet’s compositions all day long as he takes visitors around the creaky old house. The bed in which Tagore slept is still there and has an inclined headrest that was specially made to help with his respiratory problem. His mahogany writing desk and chair face a window that has a gorgeous view of the lush green mountainside – it is easy to imagine the soothing effect of such tranquility on the nature-loving poet’s imagination.

The Rabindra Bhawan museum is a must stop on the itinerary of every literary pilgrim.

Mongpu is also the place where the first government quinine factory was set up in the year 1864. Barks of cinchona plants, grown on several plantations in Mongpu were used to extract quinine, a medicinal compound used for curing malaria.

The majority of the local population depended on the cinchona plantations for livelihood. However, with the advent of artificial quinine, natural extraction of quinine from cinchona has come down over the years.

Mongpu is also home to colourful orchid gardens, with the Mongpu Cymbidium Orchid Park (it has more than 150 varieties of orchids!) being a must visit.

The Kalijhora waterfall is another scenic picnic spot near Mongpu. Gushing from a height of 550 feet, the black spray of the waterfall pours into the clear blue waters of the river Teesta at the northern edge of the Mahananda Wildlife Sanctuary.

There is also a picturesque Buddhist monastery, the Dinchhen Sherap Chhoeling Gompa, perched on a hillock that overlooks the bustling bazaar of Shanti Chowk in Mongpu. A small winding stairway from the market leads up to the serene little monastery.

So, if you are bibliophile who would love to experience a slice of literary history accompanied by gorgeous views of verdant hills, head to this Himalayan village that inspired Tagore.

How to Reach Mongpu: Mongpu can be reached either from Darjeeling through Peshok Road, or from the Sikkim Bengal National Highway 31A by taking a diversion near Rambhi Bazar. The nearest railway station from Mongpu is the New Jalpaiguri station and the airport closest to the region is the Bagdogra Airport.

Accommodation: Not being a typical tourist destination, there are few choices for accommodation in Mongpu. However, tourists wishing to stay here can avail the home stay facilities provided by the residents of the village.

You May Also Like: In This Tiny Karnataka Village, Farmers and Shopkeepers Debate over Shakespeare and Kalidas