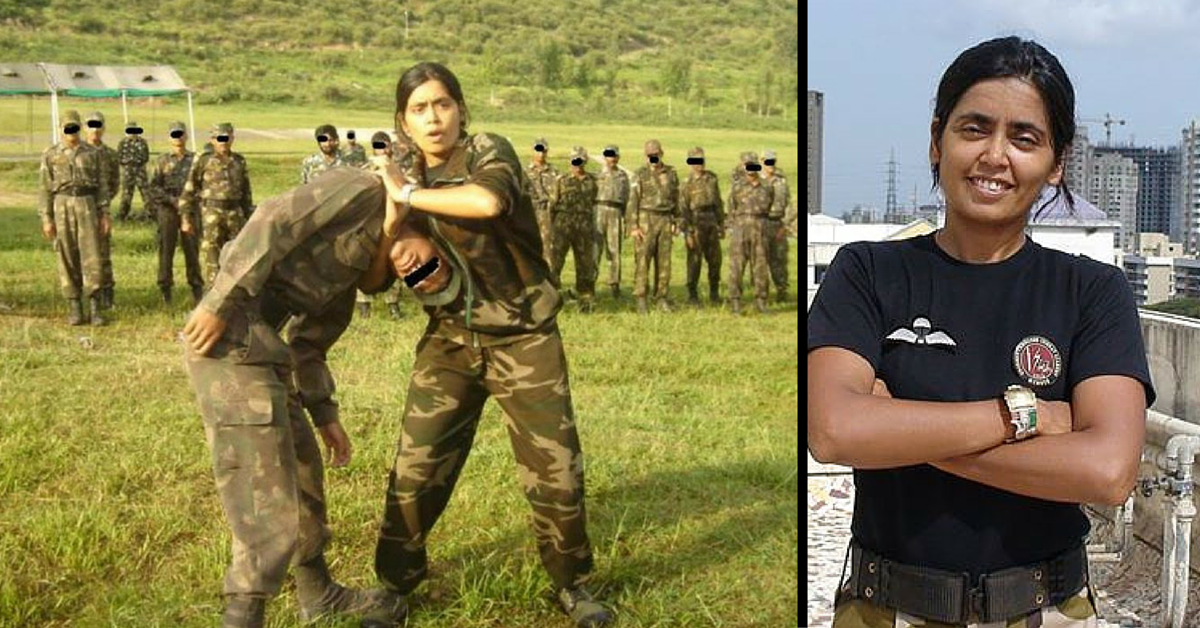 From babies to boardrooms, today’s women can juggle several roles with panache. But there are some women who do more than this, going beyond the challenges of their personal lives to be of service to a larger cause.

The amazing Seema Rao is one such woman and this is her story.

A 7th-degree black belt holder in military martial arts, Seema Rao is India’s only female commando trainer. A prominent expert in close quarter battle, Seema has been giving commando training to various armed forces in India for 20 years, without taking any monetary compensation in return! Seema is also a combat shooting instructor, a firefighter, a scuba diver, an HMI medalist in rock climbing, and a Mrs India World pageant finalist.

This incredibly multifaceted lady is also one of the only 10 women in the world certified in Jeet Kune Do, a unique martial art form created by Bruce Lee in the 1960s.

Seema Rao is the daughter of freedom fighter Prof. Ramakant Sinari, who helped in the liberation of Goa from the Portuguese. The deeply patriotic Seema grew up listening to stories of India’s struggle for independence and always wanted to serve her country. She finally had the opportunity to convert this desire into reality when she met her future husband, Major Deepak Rao, at the age of 16. Major Rao had been practising martial arts since the age of 12 and it was he who introduced Seema to this empowering field.

Major Deepak Rao is Seema’s co-pioneer in the field of close quarter battle training. In 2011, he received the President of India’s rank award for his 20 years of contribution to the Indian Army. Others who have been honoured with the same award are Mahendra Singh Dhoni and Abhinav Bindra.

After marriage, the couple continued to learn and excel in martial arts, shooting, and weapon defence while they simultaneously pursued an education in medicine. After becoming certified doctors, Deepak equipped himself with the prestigious CLET Law Enforcement certification, while Seema did her MBA in crisis management. The formidable couple then started thinking about how they could channelise their desire to do something constructive for the country. After much thought, they decided to train the soldiers of the Indian armed forces without accepting any compensation in return.

There were two factors that inspired them to take up this Herculean challenge. One was the desire to serve the personnel who guard India and the other was their instinctive need to remain engaged in combat and martial arts. So, in 1996, they approached the Service Chiefs of Army, Navy, BSF & NSG. The chiefs were impressed with the couple’s dedication and decided to try out their training programme. There was no looking back after that.

Seema has since spent 20 years as a full-time guest trainer of the Indian armed forces.

The journey wasn’t easy. The couple had to face several financial hardships in the initial years of their marriage but they stuck to their decision of not charging a single rupee for their work. Also, since Seema was constantly travelling to hostile locations, through harsh weather and inhospitable terrain, she could not even attend her father’s funeral. Realising that it would be impossible to carry a pregnancy through, given her rigorous training schedule, Seema consciously decided not to have her own child and instead adopted a girl. In the course of work, Seema also suffered multiple injuries that included a vertebral fracture and a severe head injury that made her lose her memory for months (she could not recognise anyone but her husband). She was also shot at by insurgents but her determination to serve her nation never wavered.

Along with her husband, Seema has provided training to almost every elite unit of the Indian Forces, including the NSG Black Cats, MARCOS, GARUD, Paracommandos, BSF, the Army Corps Battle Schools and its Commando Wing. She has also trained officers of the National Police Academy, the Army Officers Training Academy and the Police Quick Response Teams of almost every major city  in India.

Though Seema has repeatedly proven herself in the male-dominated field of commando training, she still meets trainees in every course who are reluctant to learn from a woman. In an interview with Naaree, Seema said:

“Not only did I have to discipline them, but I also had to gain their confidence in my ability to teach. However, eventually, I have always managed to earn the respect of commandos that I have trained.”

In 2009, after training the GARUD commandos, Seema was invited by the Air Force Chief for the official IAF Para Jump course. Here, she earned her IAF Para Wings, another rare achievement.

You May Also Like: Know Captain Radhika Menon, the First Woman in the World to Win Bravery at Sea Award

Seema is also the only external combat training resource appointed by the Indian government to date and, with her husband, she has received 4 Army Chief citations, a record unparalleled by anyone.

Seema’s strength lies in her skill in Close Quarter Battle (CQB) – the art of proximity combat that focuses on physical prowess, skill, and protocol. It involves techniques like reflex shooting with rifles, quick shooting with pistols, and bare-handed combat. It also entails the precise use of knives, bayonets, and other appropriate combat weapons. Room combat and confined space combat such as anti- hijack operations also come under the purview of CQB.

In her interview to Naaree, Seema laughingly said:

“I can shoot an apple off a person’s head from 50 yards without giving him a scratch and I can evade a speeding bullet aimed at my head with ease.”

Seema and her husband have also developed a unique and modern method of CQB exclusively for the use of Indian forces. The Advanced Commando Combat System, or Bison System as it is called, is different from the conventional CQB.

In this system, the reflex shooting method is unique and the unarmed methods can quickly handicap or cripple the enemy with the least effort. The team tactics in Bison System differ from conventional western CQBs and are unique too.

The Raos have also developed an indigenous method of reflex shooting, which is known as the Rao System of Reflex Fire. Says Seema in her interview to Naaree:

“The conventional methods of shooting generally uses up many seconds to aim precisely and then shoot. This is beneficial in long range combat when the enemy is say 300 yards away, covered by a rock. But when the enemy is just 20 yards away and in front of you, quick shooting without using too much time for precise aim is needed. To cater to this need in modern warfare, we devised the Rao System of Reflex Fire. The Indian forces have found this very beneficial.”

The Rao couple has also established the Unarmed Commando Combat Academy (UCCA), an elite military martial arts academy, to help train the Indian forces and also to publish training books for the Forces. The Academy also offers training in Jeet Kune Do and a variety of other exotic martial arts to civilians. There is also an Unarmed Combat Blackbelt program for civilians. Says Seema:

“With UCCA, we have published seven books till date and three of these are limited editions for the exclusive use of the Indian forces. Our book Encyclopedia of Close Combat Ops is the world’s first encyclopedia on CQB training and it has found a proud place in the FBI library and the INTERPOL library.

Here is a short glimpse of Dr. Seema Rao in an MMA Bout.

Seema feels very strongly about women’s safety and has designed a program specially tailored for women to help them deal with harassment, molestation, sexual assault, and rape. Called DARE (Defence Against Rape and Eve Teasing), the program equips women, both mentally and physically, to face adverse situations posed by potential eve teasers, molesters, and other sexual assaults. She has also produced and acted in India’s first mixed martial arts movie, Hathapayi, which revolves around a woman protagonist.  This movie portrays the martial art of Jeet Kune Do for the first time in Indian cinema.

Seema has been bestowed with several awards during her amazing and inspiring journey. They include the World Peace Award at World Peace Congress in Malaysia and the US President’s Volunteer Service Award. But the greatest award, according to her, is the deep satisfaction she gets from training the Indian armed forces.

To date, Seema has trained more than 15,000 soldiers in modern close quarter battle and has no intention of hanging up her boots anytime soon. She has proved that ordinary citizens can do extraordinary work for their country and that a woman can do anything she puts her mind to. As this bold and courageous woman, who calls herself 47-years-young, says:

Here is another short video that gives a glimpse of Seema Rao at work.