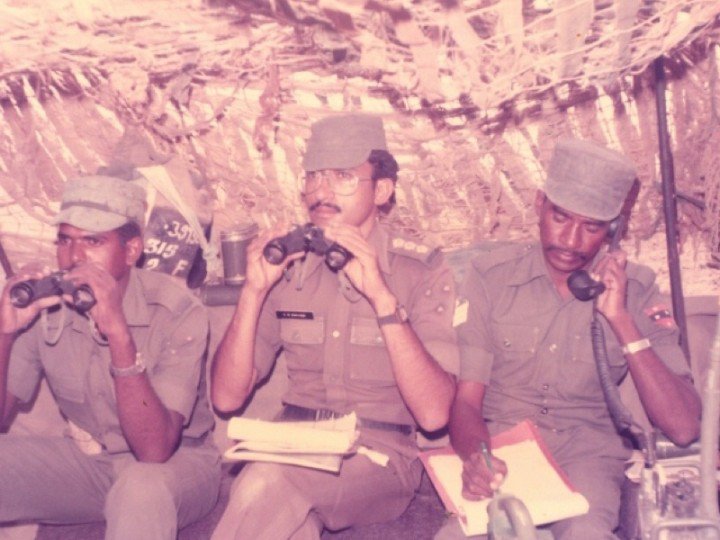 While much has been written about the brave infantry soldiers who died defending our borders, not many people know about the exemplary valour and grit shown by the Indian Army’s artillery regiments during the Kargil war. Three valiant officers and 32 brave soldiers of the artillery regiments laid down their lives in the ferocious fight to recapture Indian territory from Pakistani intruders.

In this moving letter, the daughter of a Kargil martyr writes an ode to her father who gave his life defending the nation on the battlefield.

My father was a Kargil war hero nobody ever wrote about. This is his story.

It was a tough decision to write this but I have nothing to hide. The more I stare at my father’s nameplate stuck neatly on to my notice board, the angrier I get for how easily everybody has forgotten him. The letters in white engraved onto the black plate say — C B DWIVEDI — in English and in Hindi. Every year I come across multiple articles on the ‘Heroes of the Kargil war’ and not once have I found his name there. Trust me, I’ve waited with patience for over 16 years. He’s the reason I picked up journalism, he’s the reason I want to make a difference without expecting anything in return from the world. So his story will be told, today, by his daughter.

Because his life wasn’t a waste and you better thank him for the life you’re living.

Army is a profession. Actually, it’s more than that. It’s a way of life. It’s like giving a job to somebody that’s worth a million, and telling him that — “Hey you might just die tomorrow”. Even for a million bucks, you may not find many takers. It takes a lot to choose ‘army’ as a profession. Once in the Academy, you also get a chance to choose to be in the fighting arm or any other department. So it takes a lot to CHOOSE to be on the front and take a bullet for your countrymen. And yes, my father did exactly that. He chose to be in the artillery arm and served the Indian army for 18 years; today you can become a colonel in that much time. I sometimes wonder what post he would be at today if he was still around.

Maj. C.B. Dwivedi, an officer who didn’t have time to sleep a wink during the war, never forgot to write a letter to his family, faking his well-being oh-so-perfectly, even during the war. His last letter to my mother went something like this:

…….] A lot of news shown on TV is true but a lot of it is false. So don’t believe in it completely, just believe in God.

This was two days before he sacrificed his life for the country. Daddy was a complete family man and our mother was the boss of the house. He loved spoiling her. Even when he would call from Srinagar, he would say “chota baby kahaan hai” and we would call mummy quickly. Not that he wasn’t a doting father too. He used to plan his leaves around our exams. We were so dependent upon him that my sister didn’t know how to prepare for her exams without him.

I still fail to understand how he managed to sound so carefree in his letters amidst all that chaos during the Kargil war. I remember him calling us from the satellite phone and talking about the bad weather in the background. I’m yet to come across a man who is as selfless as him. Seriously. The day I find someone like my father, I’ll marry him.

Not all units are employed during every war. During the Kargil war, Artillery and Infantry were the units that were employed majorly. Gunners belong to artillery and Maj C.B. Dwivedi was a proud Gunner. He would sit bravely at the top of the artillery gun (a weapon that’s big enough to be a tank), fearlessly facing the enemy, firing at them from dusk to dawn. Yes, this is how the Kargil war was fought — at night, when the world was sleeping peacefully, the Indian army was on duty.

It was the early morning  of 14th May 1999 when 315 Field Regiment of the Indian Army was deployed to Drass. My mother, my sister and I had just gone to see daddy during our summer vacation and we only got to spend 12 hours with him. He mentioned that in one of his letters to my mom, where he wrote.

“Even though the meeting was short, only for twelve hours, it was really nice seeing you. I’ll see you guys soon.”

The harsh truth is that we never saw him again. Had we known that those were the last twelve hours we would be spending with him, we would’ve done so much more instead of just eating lunch and dinner with him in the mess. My father was a true romantic, a true comedian, a true chef sometimes, a true father always but before all of that, he was a true soldier. His jawans loved him for the way he motivated them during the war. While he manned the guns of 315 Field Regiment, his unit suffered only two casualties during the Kargil war.

315 Field Regiment was also the first artillery unit to be inducted into the war zone. Daddy was the officiating Second in Command at that time. Operation Vijay was a tough campaign in a tough war, mainly because of the lack of information, an under-prepared army and the strategically superior position of the enemies who had intruded into our land.

The first day the regiment arrived at the base camp in Drass, they were heavily fired upon. As my uncle (Col Upadhyay, who spent every second with my father during his last days) recalls, the unit had absolutely no information about the position of the enemies. He remembers saying the following lines to Daddy that night:

The army had been sent to the war zone blindly, with some massive planning to do and execute. As my father was responsible for the safety of the artillery units that had come in, he used to take off every morning to survey and search the area for empty spaces along highways where the vehicles and artillery units could be parked. He was also responsible for coordinating the arrival of the ammunition, the communications for firing, the war survey and the dumping plans.

The time between 14th and 31st May was the toughest for the unit – they had to fire at one position and quickly move on to another location to avoid detection continuously. The only free time daddy had was spent on staring at the map and devising plans for the regiments’ next move. But he still wrote letters. He never forgot to write to us.

With the responsibility of infantry units on their shoulders, 315 Field Regiment often faced two choices at night —they could stop firing and wait till morning or they could keep firing to protect the infantry units. My father mostly chose the latter. The artillery didn’t even have bunkers, they would stay in tents. And gunners can’t hide while firing because they sit right at the top of their artillery guns as they face the enemy. That’s where my daddy sat. Right at the top. Fearlessly looking at the enemy.

The day for his regiment used to start at 2.30 am when they moved around in the hills in vehicles whose headlights were switched off. Such was the danger they were exposed to. Even Indian aircrafts were shot down during this time – Squadron Leader Ajay Ahuja lost his life on May 27th 1999, a big blow to the Indian army. But what had to be done had to be done.

I remember when we — my sister and I — had seen daddy commanding an Operation in Udi once (I don’t remember the year) — and we couldn’t stop laughing. He was far far away and had allowed us to sit on top of a hill and look at him at work. He was walking around like a true soldier, with his hands crossed behind him and his back straight as he commanded the soldiers. We kept giggling saying,

“Daddy is just taking a walk ordering people around.”

We were too young to understand what a terrific leader he was. He was always a winner and that day too, he came back only because the enemy had waved the white flag to declare peace.

On the evening of July 2nd 1999, 315 Field Regiment was hit by yet another dilemma — to continue firing or to stop firing. The infantry units (18 Grenadier and 8 Sikh) would’ve been in serious danger had they stopped. Daddy again chose the former, rushing out of his tent and motivating his boys to keep firing, to keep attacking the enemy. He knew how dangerous it could be but it was either protecting himself or protecting a whole unit — he chose the latter. It’s the madness in a soldier’s blood that most of us will never understand. He was mad.

He was at the gunner’s position and was firing at the enemies, when a shell landed right next to him. He realised that his arm had been hit. But, what he didn’t realise was that some of the shrapnel had also entered his body from the side. As a result, he bled a lot but kept thinking that it was just his arm. In the heat of war, a soldier often doesn’t feel pain. Maybe this was the reason, but we’ll never know.

In this shelling, he and four of the other gunners suffered fatal injuries. At that time, daddy was the only 2 IC who was single-handedly overseeing so many operations in that terrifying war zone. Tiger Hill was the last stop for the Indian army. My father could not see the tri-colour flag flying high but I’m sure he could sense the victory from wherever he was at the time. He played a huge part in it and no one can take that away from him.

Our world came shattering down when we got the news on July 2nd 1999. We were just young kids and my mother, she was only 34 then. But, in some way, his spirit picked us up every time we fell. It’s been 16 years to that day.

The heroes of 315 Field Regiment were pivotal in bringing home the Kargil victory and received an honorary title as well but most of them never got the well-deserved appreciation from their country, from the people who were probably sleeping quietly in their homes when they were risking their lives. They, who were the backbone of the war, were never remembered again.

As my mother, my sister and I await the invitation from the government to celebrate Vijay Diwas in Drass some day with them, I want to salute every one of those men because of whom India is alive, free and safe today.

My father, my hero, I salute you.

This letter was first published here.