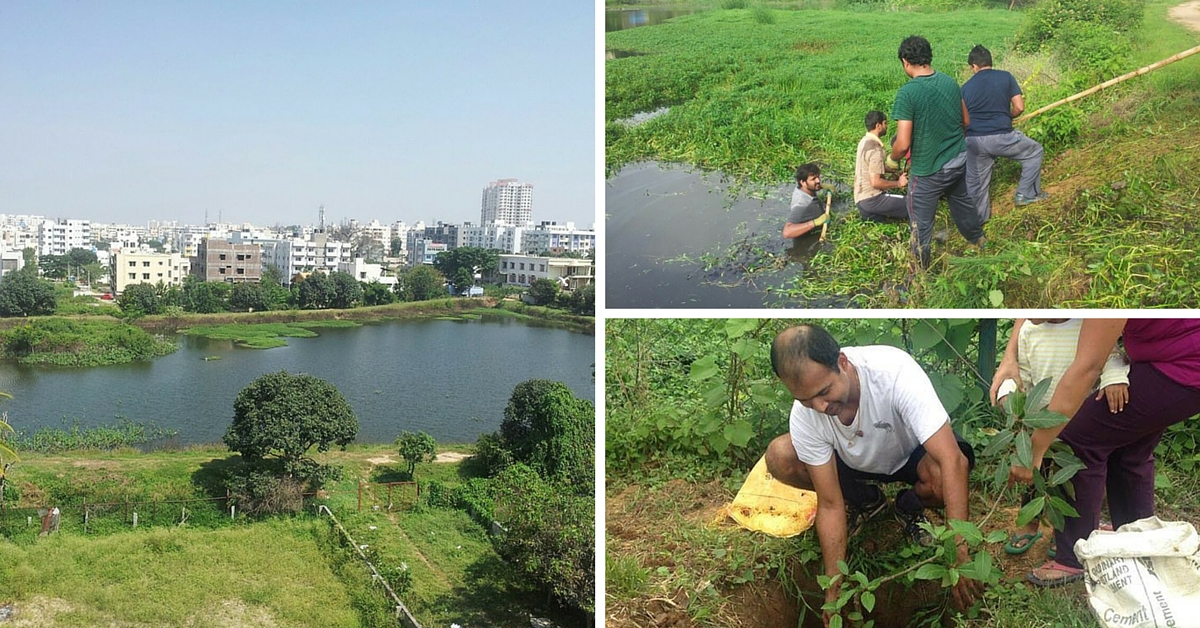 Here is how a residential community in Bangalore, Akshaya Nagara, has created an enviable living environment for its residents.

Akshaya Nagara is a rather unassuming residential layout in Bangalore. It did not even fall under the Bengaluru metropolitan civic body, BBMP, until recently. This means it did not receive any of the public facilities like water supply, sewage drain pipes or garbage collection service that other residential areas receive. Even today, Akshaya Nagara is not a beneficiary of the centralised Cauvery water supply and is solely dependent on bore wells.

However, the residents of Akshaya Nagara decided not to lament about these issues or wait for the authorities to solve their problems. They took it upon themselves to find sustainable solutions and create an enviable living environment for themselves.

It was over a decade ago that the ground work for the development of Akshaya Nagara began. The layout had a rare blessing – a lake. But it could not really be called a blessing then. Although the lake has historical relevance from the times of Begur royalty and is located at the heart of the layout, it was filthy because all the sewage water from the layout used to flow into it. It was also a spot for open defecation. In fact, the stench, filth and overgrown weeds made the lake and its surroundings so unbearable that it was on the verge of being abandoned. But the scenario was totally reversed by the dedicated work of the residents of Akshaya Nagara.

In 2004, a retired bank official named Ramesh Kumar began mobilising interest among the residents about the need to save the lake and the surrounding environment.

The first aim was to stop all sewage from getting dumped into the lake. Since Akshaya Nagara was not part of BBMP, it was not eligible for any funds from the civic body. The residents decided to build the sewage drains by themselves. Every house contributed towards the fund and the job was begun. The local MLA could not help but notice the dedication of these residents and decided to help them with the funds.

The newly laid pipes helped ensure there was no more sewage flow from Akshaya Nagara layout into the lake.

After this big achievement, the residents went on to the next pressing issue – water supply. The layout’s water supply depends entirely on bore wells. Ramesh Kumar and his team were convinced that the underground water reserves need to be replenished constantly. They started building storm water drains to channelise the water into the lake. They also dug up over 60 rain water pits near the layout, specially layered using charcoal and sand, so that the rain water percolated into the ground.

Most of the buildings in the layout practise rain water harvesting. “We save every drop of water in Akshaya Nagara and ensure that our bore wells are recharged. Even during this peak summer, none of our bore wells failed us,” says Ramesh Kumar.

Over the last decade, the population of Akshaya Nagara increased and maintaining the lake became difficult. The lake again attracted weeds, debris, garbage and, of course, open defecation.

Last year, a few youngsters saw a lone old man clearing a dirty patch of land near the Akshaya Nagara lake. It was Ramesh Kumar. Curious as to what he was doing and why, they started to talk to him. He told them, “I want to save this lake.” The youngsters were so inspired by his dedication that they decided to start efforts anew to revive the water body.

Volunteers from the layout got together every week. They cleaned the lake, de-weeded it and fenced it.

They levelled the land around the lake to make a beautiful walking path. They said no to concrete blocks for the path and decided to keep the natural mud trail. They planted saplings all along the lakeside and installed benches for people to sit on. As a result of their hard work, the area has been completely transformed.

Today, over 400 people walk and jog around Akshaya Nagara lake every day! A yoga class is held on the lakeside.

The volunteers planted 1000 trees in the last one year. They have committed to planting another 1000 trees every year in the area around Akshaya Nagara.

Every week, the residents of this layout devote their time and efforts to maintaining the Akshaya Nagara lake. But they are not stopping at this – they have started working to save the next lake in the vicinity, Yelenahalli lake!