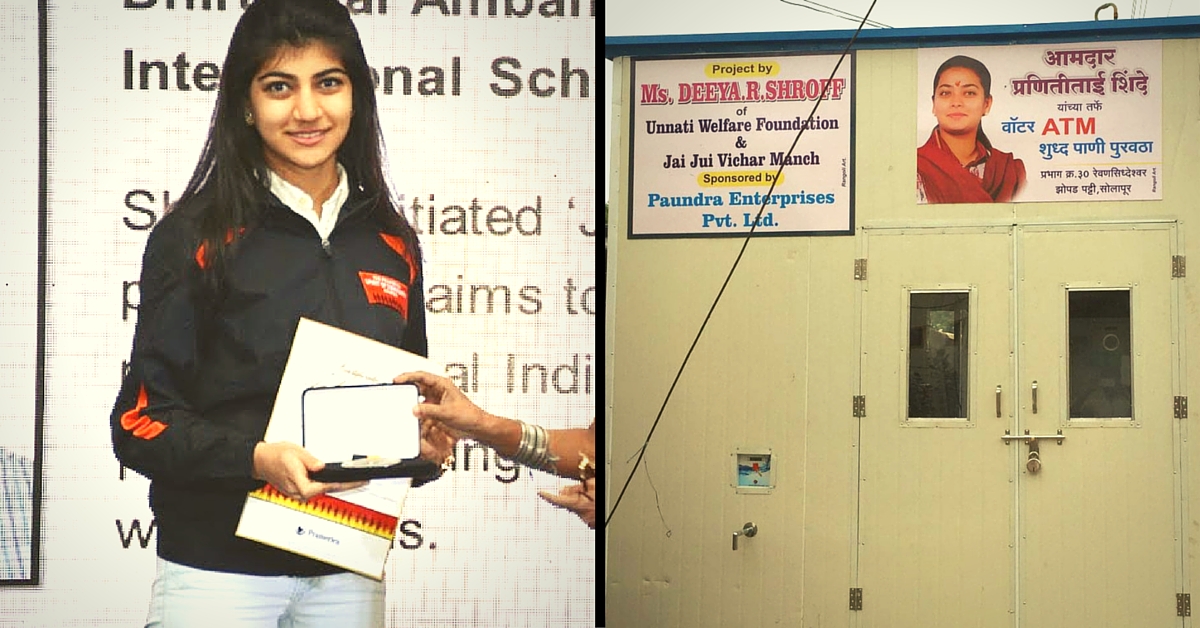 Deeya Shroff, a student of Class 11 at Dhirubhai Ambani International School in Mumbai has started an initiative to set up water ATMs  in rural areas across the country to provide clean drinking water to people. She calls the project Jal Jeevan, and the first ATM has been set up in Sholapur, Maharashtra. Nearly 300 families in the region are already using it.

Deeya was moved by the condition of people in the villages who had to walk for miles to fill drinking water every day. After researching on the issue of water scarcity, she decided to do something to help and reached out to Eureka Forbes to discuss her idea.

With the help of the company she came up with a project plan to set up water ATMs in rural areas across India.

“There were bureaucratic hurdles and process delays, but I followed up with the administration till I got a go-ahead,” she told PTI. Deeya raised Rs. 15 lakh by contacting individuals, government officials and the municipal commission. The first ATM was inaugurated on Republic Day this year by the Municipal Commissioner.

“The water ATM is a system where the local source of water i.e. bore well etc. is connected to a water purification plant that is set up in a village. The purification plant works on the basis of Reverse Osmosis and purifies water. This purified water is then stored in a tank near the ATM, ready to dispense in 20 litre jerry cans. Each family is given a water ATM card for daily usage. When the card is swiped at the ATM, the purified water is dispensed,” says Deeya’s blog talking about the Jal Jeevan initiative.

Deeya was recently honoured with the 6th annual Pramerica Spirit of Community Awards for her “extraordinary” contribution to community service.

She is one of the two national winners who received a gold medal, a certificate of appreciation, and a cash prize of Rs. 50,000.

The Pramerica Spirit of Community Awards is an annual nationwide search to identify and recognize school students who have made a positive difference in their communities through volunteer community service.

The awards programme, which is an extension of ‘Prudential Spirit of Community Awards’ – the largest youth recognition programme in the United States, was introduced in India in 2010. 46 students from cross the country are shortlisted for formal recognition, and 16 out of those are presented with certificates and silver medals. Two out of these 16 finalists are recognised as national winners. Children also win in group categories with three groups being recognised as finalists and one as the national winner.

Another student who received the gold medal along with Deeya is Nikhiya Shamsher from Greenwood High School in Bengaluru, who is working on making education accessible to children from underprivileged families.

Read more about her work here: Wondering What to do with Old School Stuff? This 13-Year-Old has the Perfect Answer