From establishing a seed bank, to building and maintaing ponds, the many steps that helped revive the deforested Orans in Rajasthan.

From establishing a seed bank, to building and maintaing ponds, the many steps that helped revive the deforested Orans in Rajasthan.

All across the world, communities come together to combat a range of issues, ranging from epidemics to violence, and from education to environment. A unique understanding of historical, cultural and causal points ensure that voluntary action by citizens lasts longer than government initiatives. These also have the added benefit of fostering growth in the community in a holistic manner.

One such example is a Grow-Trees’ project at the periphery of the Sariska Tiger Reserve in Alwar, Rajasthan.

The areas adjoining the forest are largely undeveloped and inhabitated by tribal communities like Bhil, Meena and Gujjar. These areas, known as ‘Orans’ or ‘Devbani’ in local parlance, are spread over 1 lac hectare of land in Rajasthan. Many of these are under the protection of villages. Named after local Gods and Goddesses, these lands are managed and maintained by local communities.

Communities in Alwar recognise the Orans as a source of water, food, fodder, fuel and medicines. They are the only surviving area of mature woodland in otherwise bare surroundings and provide refuge for wildlife.

Slow deforestation over the years, however, have left the Orans a shadow of their former, lush selves. Several factors have contributed to the deforestation and degradation of the Orans. Over-grazing and new livestock rearing practices (including taming more goats than cows), has been the primary reason.

Increase in the number of goat vendors, as well as related market factors, has led to a major change in the vegetation composition of the region; a change that is visible in the very grass and bushes growing in the Orans.

A lack of clear demarcation of the Orans is yet another reason for their deforestation. Some Orans have been taken over by the forest department, leaving the communities detached from their own lands and forcing them to over-extract resources.

In the old says, saints and learned men used medicinal plants and herbs to treat the sick. Medicinal plants like the Chapun (Grewia hirsutae Vahl) were used for retention of placenta, and Jhad desi (Zyziphus mauritiana) was used for foot rot. This ensured that these plants were planted in abundance and were well-maintained.

However, changing lifestyles and changing medicinal practices in rural areas have resulted in a sharp decline in the number of these medicinal trees. The situation has further been exacerbated by the lack of rainfall in the area.

A decade ago, the region used to get 600 mm of steady rainfall. Today, the region gets 400 mm of irregular rainfall. Rainfall is crucial for the grass to grow and for the water table to replenish itself. This lack of rainfall has, therefore, transformed the nature of soil from semi-arid to arid in the last few years.

KRAPAVIS, an NGO headed by biologist Aman Singh, stepped forward to take on the revival of the Orans. In two decades, the organisation has done commendable work that has been recognised internationally as well.

The two organisations have since planted more than 2 lac trees in the Orans. 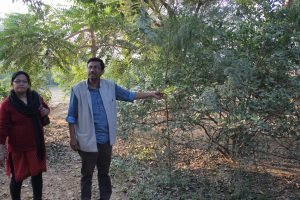 The project has also pushed for community participation in these conservation efforts. The community has come forward to undertake tasks like planting trees, setting up a seed bank, water harvesting, setting up village institutions for better management, building and maintaing ponds and many other similar activities.

Many local species of fruit trees and medicinal plants have also been reintroduced in the area and people have been encouraged to ensure the upkeep of the same; this will help preserve the biodiversity of the area. Artificial water tanks have been also been built and maintained; these are particularly beneficial for nursery raising and also for human use.

Apart from planting trees, policy makers have also been approached for the revival of the Orans. They have already agreed to the demarcation of these areas. Earlier, the state government had leased out the land, but KRAPAVIS convinced them to conduct a proper survey and place the area under revenue land; this will ensure that while the land is owned by the Tehsildar, it will be maintained by the communities in the area.

Under Rajasthan Forest Policy, it is proposed that a new legally accepted committee be formed at the community or village level to oversee the maintenance of the Orans.

The plantation of 2 lac trees in the area has created close to 17,000 workdays, mainly in the sector of nursery raising and planting activities. Rural women have benefitted the most from these activities as it has provided them with a additional source of income.

The trees are already providing the communities with various resources. They have also become a natural habitat to wildlife; various animals and birds like peacocks can now be seen in abundance in the area.

Reforesting 200 acres of Orans lands has also helped offset hundreds of tonnes of carbon dioxide each year, thereby contributing towards cleaning the atmosphere. The project is proof that environment protection and poverty alleviation need not be mutually exclusive and in fact, can go hand-in-hand.