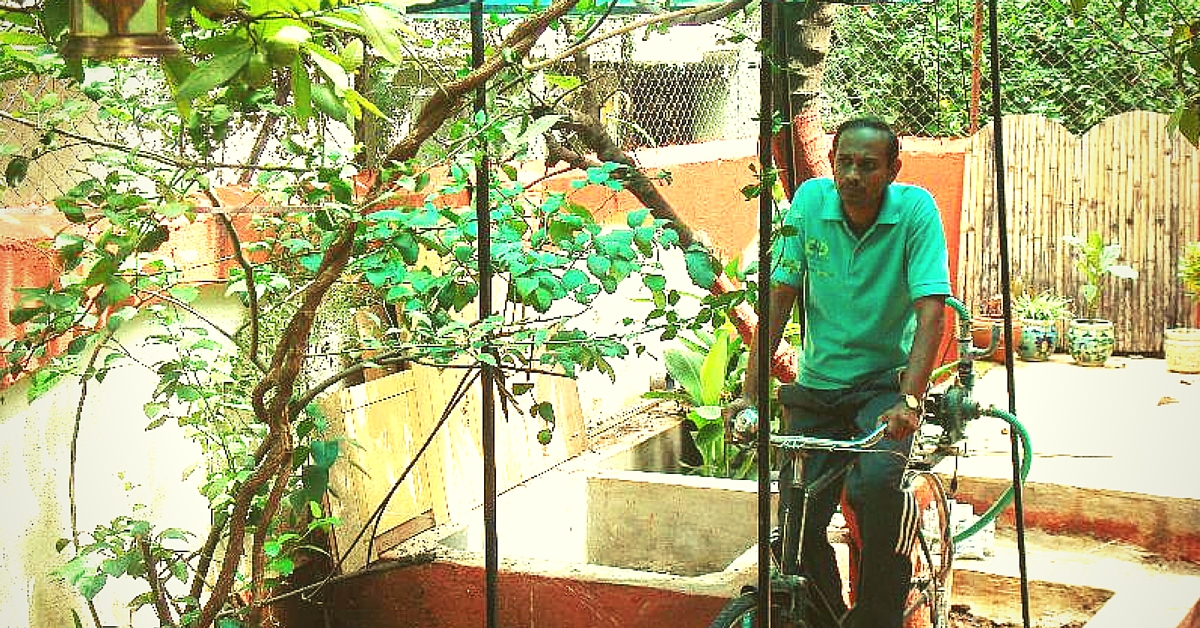 Sanjay Athavale, a 51-year-old resident of Kothrud in Pune has been recycling wastewater from his bathroom and kitchen to water plants in his garden every day, for the last four years. He uses a cycle that powers a pump when pedalled.

Every minute of cycling provides around 30-40 litre of water to the garden and his family recycles over 600 litres of water every day.

“My family of four was using 400 litres of water every day in our bathroom and for the washing machine. I realised the need to conserve water and decided to recycle it,” he told DNA.

Sanjay has a wastewater purification system set up at his home in which the water from the bathroom pipeline is first diverted into a water tank where it is purified using a cleansing mechanism that consists of sand, stones and coconut waste. The tank has three layers of filters – coconut peels and stones make the first layer, then comes the sand and the last layer is made up of ecofert, a fertilizer that Sanjay received from an NGO. The tank also has Kardal trees inside it, because the roots of these trees purify water.

The purified water then flows into the next pit for storage. The storage tank contains guppy fish who feed on mosquito larvae that usually appear on still water. This purification process ensures that the water doesn’t stink and Sanjay’s family then pumps the water into the garden using drip irrigation system.

“I came up with this idea as every summer, Pune faces acute shortage of water…The initial requirement is that the ground levelling should be done so that the flow of water happens naturally,” Sanjay, who is the owner of an IT firm told The Indian Express. He is also a member of Green Hills, a group that has been planting trees around Pune.

As a part of the Green Hills group, Sanjay was trying to work on a project to pump water up-hill when he came across Chandrakant Pathak, who made this bicycle system. While it did not work on the hill, Sanjay decided to set it up in his house. The filter was designed by Sanjay’s friend Sandeep Joshi, an environment technologist and founder of Shrishti Eco-Research Institute (SERI)

“When we pedal, the water is supplied to my garden through a drip irrigation system. One minute of cycling can supply 18 litres of water and a ten-minute work-out by each family member is enough for the 50 trees in my garden. The left-over water is stored and the excess goes in the drain. During monsoon we don’t have to cycle but each of us store about 600 litres in the tank with our usage every day,” Sanjay told Homegrown.