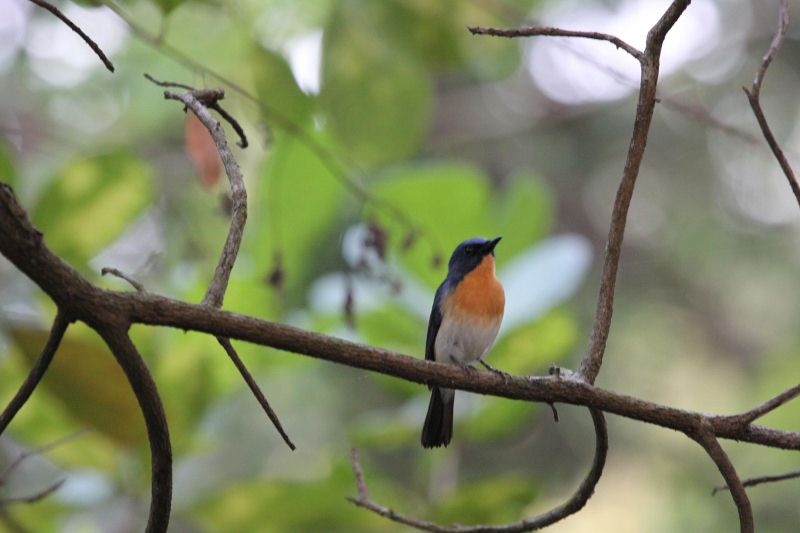 There is a lot more to Goa than the sun and sand, discovers Gangadharan Menon on a recent visit there. Not only did he meet with a large diversity of flora and fauna, he also met a forest ranger who impressed him with his knowledge about the various species and his dedication towards conserving them.

Goa is known for three things. Beaches, beaches and beaches. But of late, it’s being discovered that it also has forests. In fact, there are as many as 750 square kilometres of protected forests, spread across 6 sanctuaries in the tiny state of Goa: Bondla, Mhadei, Mollem, Netravali, Cotigao and Chorao.

Like Kerala, Goa is a strip of land sandwiched between the Arabian Sea and the Western Ghats, where swaying coconut palms slowly transform themselves into dense evergreen forests.

Of all the sanctuaries in Goa, the one at Bondla is the friendliest.

There are many reasons for this: It’s a teenie-weenie sanctuary of just 8 square kilometres; so the size is not intimidating. Though it’s an outcrop of the Western Ghats, it is isolated from it. In fact, it’s an island of hillocks surrounded by valleys on all eight sides. So the lost feeling of being in an endless forest isn’t there. Since it’s a moist, deciduous forest, the vegetation is sparse; hence it’s easier to spot a wild animal lurking in the bushes. Another reason could be the sights and sounds that welcome you in Bondla: an innumerable number of butterflies and birds that make it point to perch on the trees near the road, and not play hide and seek in the yonder forest. Or is it the aesthetically designed cottages that merge so beautifully with the forest that make it a homely forest? Or is it the friendliness of the staff, starting with the affable Paresh Porob himself, that makes the forest itself so friendly? I really don’t know; and I really don’t want to know.

Goa is probably the only state where eco-tourism is managed so well by the Forest Department. And the sanctuary at Bondla is an example worth emulating by other states. The philosophy behind eco-tourism is interesting: To reduce poaching, increase tourism. The very presence of tourists, and the continuous movement of vehicles, will deter poachers who prefer to operate in forests that are not easily accessed.

To defend the forest and to safeguard the lives of the citizens of the forest, a new breed of bold and upright officers have been created. And unlike in other states where the officers have only a lathi to counter the armed poachers, here they have been powered with arms and empowered with decision-making. They are even given the license to engage in ‘hot pursuit’ of poachers, and are allowed to do their duty without political interference. Another striking aspect is the passion for conservation that the entire staff shares, and the knowledge they have about the flora and fauna of the forest they dwell in.

Our bus from Ponda dropped us at a nondescript place called Ganjem, where we were to be picked up by a forest jeep. We got down in the middle of nowhere, but the appointed jeep hadn’t reached. As we walked towards a road that seemed to lead into a forest, I was reminded of a similar incident in Sariska. There, without knowing the way, my wife Anita holding our 6-month old son Akash, and I lugging the luggage, had walked in the direction of the Sariska sanctuary, after being dropped in the middle of nowhere by a private bus. And there, at the very first turn, we had seen the bone-chilling sight of a kill on the roadside. Here, things were not that alarming, and soon enough the jeep came a-calling.

A walk in the forest revealed that Bondla is a birdwatcher’s paradise. All around us were birds of different feathers that had flocked together, creating a symphony of evening melodies. There were six flame-backed woodpeckers that came to roost in the hollow trunk of a bottle palm; the ruby-throated bulbul that announced itself as the State Bird of Goa; and a dozen hornbills that flew overhead and shook the treetops with the flapping of their gigantic wings. Little did we know that this was just the trailer of a 70mm feature film to follow.

Later, Paresh Porob, the Range Officer of Bondla who’s earned the sobriquet of ‘Ranger in Danger’ for his courageous stand against the jungle mafia, took us to his personal hideout from where he has taken many a wonderful photograph. Made with camouflaged cloth, it was erected right in front of a waterhole; and in his meditative moments Paresh would sit there, taking photographs of birds and bees and butterflies. Looking into his eyes, I wondered what he would have been if he wasn’t a forest officer. Maybe a commando for his courage and commitment; or maybe a wildlife photographer for his sense and sensibility.

In the late evening, he took us to his house and introduced us to the hatchling of a forest owlet that he had recently rescued. It gave us all a welcome peck, mistaking our fingers for food. Paresh told us how he gets up every three hours in the night to feed his baby; and that’s when we realised that an owl has its eyes wide shut in the day, and is wide awake in the night! This Zoo in the Carton was the miniature of the Bondla Zoo which started as a rescue shelter for the injured animals of Bondla sanctuary; but expanded to become a haven for animals rescued from forests all over Goa.

The next day we trekked to the watch tower for a bird’s eye view of the entire sanctuary. And on the way, we came across a beautiful nest made of moss from which an unidentified bird flew away, and sat on a faraway branch. Later it was identified as the red-throated flycatcher; and to our pleasant surprise we learnt that it was only the third time it has been sighted in Goa. As we climbed the Sidha hill we came across the only patch of semi-evergreen forest in Bondla, where we saw the Goan cousins of the Malabar Giant Squirrel.

As we walked through the forest, we observed that every tree has a hierarchy. The smallest birds are on the lowest branches; the medium-sized ones occupy the middle branches; and the biggies are perched right on top. A nice little pecking order!

In the evening, as the pre-monsoon clouds gathered overhead, Paresh told us about the unknown perils of an erratic monsoon. If there’s a false monsoon ahead of the real one, a curious tragedy unfolds. When it rains, frogs that have been in a dormant state for months emerge from the netherworld, and as is their wont immediately get into the mating ritual. In due course, the eggs are laid but when they hatch, the false rains disappear as truly as they come. And the tadpoles die a slow death in the dried up pools.

There was another shocking fact that Paresh shared with us that made us change the way we look at proliferation of wildlife. When a large herd of spotted deer darted across the forest, Paresh told us that the scenario is grim. We wondered, why is Paresh lamenting instead of rejoicing at the spurt in numbers? The reasons were two: An increase in the number of spotted deer meant the number of predators is decreasing. And also that the number of the smaller species of deer, like the barking deer and the mouse deer, is decreasing. Simply because, the voracious eaters that they are, spotted deer polish off the entire forest floor, including the tiny plants that are the only source of food for these tiny, ground-hugging deer.

As we bid farewell to Paresh and drove to our next destination in Goa, we discovered that outside the protected forests there was an equal area of ‘unprotected’ forests where mining was going on in full swing. The soft, red soil from these open mines had flown off for miles and miles, and covered the treetops of many forests like a shroud. And I wondered if the gaping holes that dot the landscape today will turn out to be the graveyards of Goa tomorrow.

Thankfully, soon after I returned from Goa, I read the news that the Western Ghats has been declared a World Heritage Site for its rich bio-diversity. And the fabulous forests of Goa can now breathe a lot easier.

All Photos by Gangadharan Menon

After 28 years in advertising as a writer and creative director, Gangadharan Menon quit the profession to take up his first and second love: teaching and travel. He has over 60 published articles that recount the joy of travelling in this amazing country. A member of Bombay Natural History Society, he is an avid wildlife photographer too. He can be contacted on wildganges[at]gmail.com