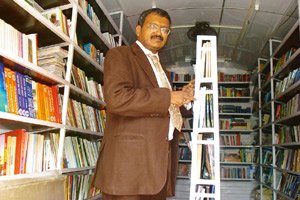 Urban India has it easy in terms of access to literature and good books. We have our malls and online book shops. However, it is not so easy for people

Urban India has it easy in terms of access to literature and good books. We have our malls and online book shops. However, it is not so easy for people in rural India to get access to vernacular literature. Majority of the rural population get access only to newspapers and textbooks. One man, Pankaj Kurulkar, aims to change this scene with his wonderful initiative – Granthayan.

Aruna Viswanatha reports about Granthayan in this article at The Mint:

An electrical engineer by training, 45-year-old Kurulkar ran a networking and hardware solutions company for 15 years, before he put Rs3 crore of his own into Granthayan, a chain of mobile bookstores that travels the length and breadth of Maharashtra selling mostly Marathi books. Kurulkar says he plans to later replicate his business model in other states, focusing on books in their regional languages.

As one can easily imagine, the roadblocks and problems that such an initiative would face are significant:

Only 59% of India’s rural population can read, according to the 2001 census, and reading material itself is limited outside the cities. Local languages have also had to face the growing popularity of English. “The situation is pathetic. People are migrating from vernacular language to English medium, and not at all passionate about reading Marathi,” says Kurulkar, who writes novels and short stories as well.
“Rural areas don’t see anything other than newspapers and textbooks. So good, affordable reading material, which is simple, is the need for the day,” says Rukmini Banerji, a programme director at non-government organization Pratham, which prepares an annual report on the status of education measuring student literacy. “Nothing is easily available like you can go to the paan (betel) shop and get gutka.” Pratham’s publishing arm, Pratham Books, which prints cheap children’s books, also has plans to enter the rural retail market next month, according to managing trustee Ashok Kamath.

Kurulkar, however, is confident that this initiative of his will make an impact on the current scenario. His progress so far has been very impressive:

To date, Kurulkar says, his trucks have visited 28 out of the 35 districts in Maharashtra, and covered 80% of the state. The trucks follow pre-set routes—up and down the Mumbai-Goa highway for instance—and stay in a neighbourhood from a few days up to a week, depending on the amount of local business. Each truck has a staff of three, with a driver, an accountant and a helper on board.
According to Kurulkar, Granthayan has sold around 100,000 titles in the first three months of operation, and stocks both Marathi and English titles, though, he says, 75% of the company’s stock and sales are in Marathi.

To know more about what are the bestsellers in the rural areas and what are the other problems faced by Granthayan, please do read the entire article here.