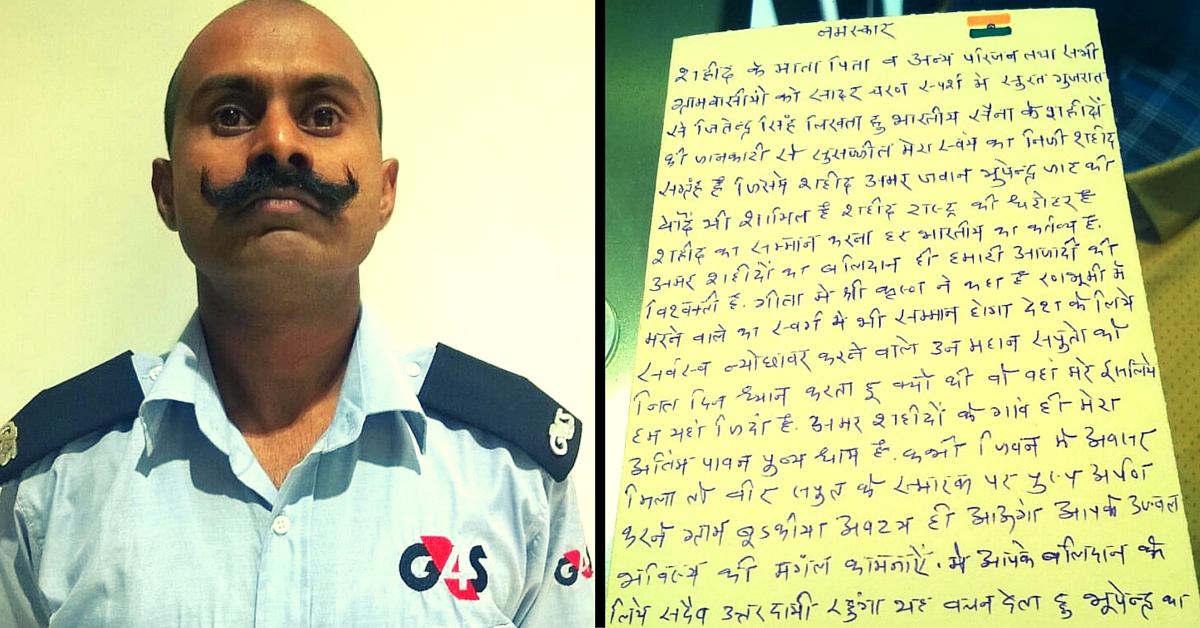 “I will always be grateful to you for the sacrifice you have made for the country. I promise that your son’s sacrifice will not go unrecognised,” writes Jitendra Singh Gurjar in one of his letters addressed to the family of Late Bhupendra Jaat, a soldier of the Indian Army who lost his life while fighting for the country.

Jitendra, a 37-year-old security guard currently posted with a private firm in Surat, has written close to 3,000 such letters, on postcards addressed with love and respect, to numerous families across India.

“I have been writing these letters since the Kargil war. I think that being in the army is a tough job, and it is the country’s duty to respect those martyrs who sacrifice their lives for us. There are many people who have been living under the dark clouds of grief after losing their loved ones, and we should fulfil our moral duties towards those families,” he says.

With this feeling, Jitendra started writing postcards to thank the families of Army martyrs across the country, to pay his respects, and to tell them that there is someone out there who is thinking about them. In the letters he acknowledges the fact that these martyrs gave up their lives to protect citizens like him.

Jitendra began by collecting the address and contact details from the local newspapers of the martyrs’ home-towns that he obtained from different libraries.

Today, he has the details of about 20,000 martyrs, with their names, numbers, unit details, addresses, etc.

This patriot has been working as a security guard for 13 years now. He uses the money from his own pocket to send the postcards and to procure the required addresses.

“One of the martyrs’ fathers once called me and told me that he wants to meet. We have not been able to meet yet, but I usually call him to remind that there is a person in Gujarat who is thinking about his son,” he says.

A resident of Kutkheda village in Bharatpur district of Rajasthan, Jitendra named his son after Late Hardeep Singh, a soldier who lost his life in 2003 fighting militants in Jammu and Kashmir. He has been inspired to take up this path because his father was also a soldier with the Army.

Jitendra wanted to join the army as well, but could not do so. He has visited the families of many martyrs to personally thank them.

“My family thinks I am crazy to be doing something that gives no returns in spite of coming from a middle class background, but I am determined and will not leave this path till the end,” he concludes.