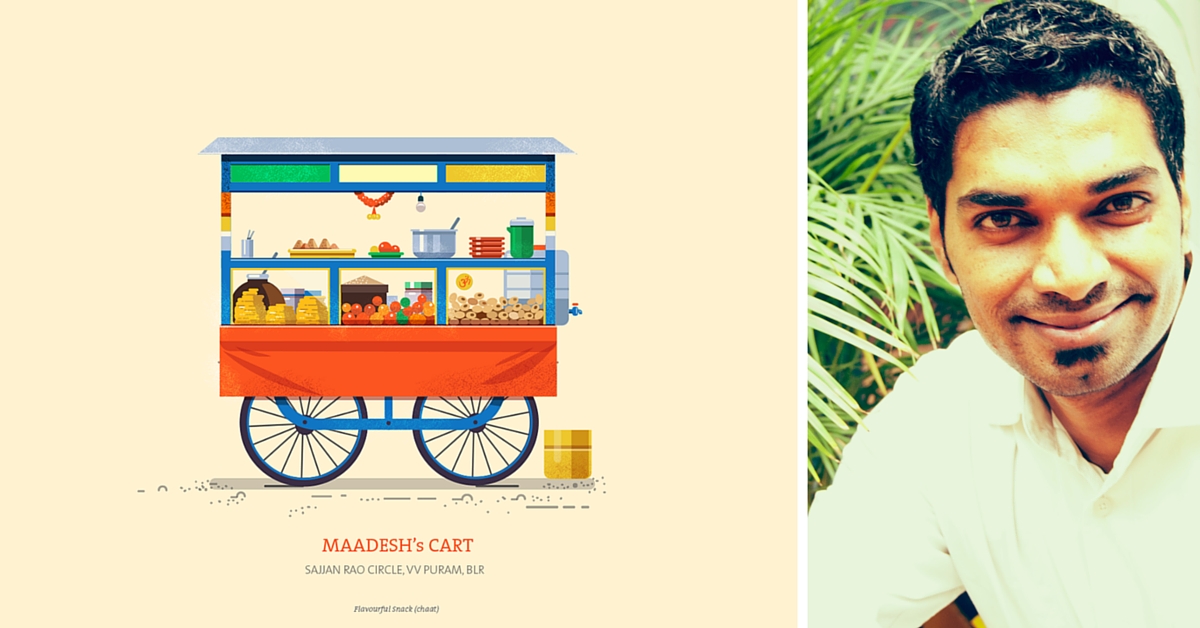 Artist and designer Ranganath Krishnamani captures the quintessential charm of thelas, or push carts in Bengaluru through illustrations, as a tribute to the ‘superstars of Indian streets’.

Push carts – or thela – have been an essential feature of Indian streets for a long time. It’ll be hard to find streets and areas in India that are devoid of these manually-pushed four-wheeled carts. Like the vada pav carts in Mumbai, tikki thelas in Delhi, kulfi carts in Pune, flower carts in Chennai and puchka carts in Kolkata, Bengaluru too has its share of push carts.

The essence of these carts have been captured by a Bengaluru-based artist and designer in a series of illustrations, created in detail from memory.

Ranganath Krishnamani was fascinated by the push carts he would see on the streets beside his house. “Growing up in Bangalore, the street that we lived in Malleswaram was frequented by several cart vendors who would pass by, each so different from the others,” he says.

“Their bountiful carts would have on offer flowers, veggies, street food like ice golas and flavourful chaat.”

Krishnamani, who calls himself a “hardcore Bangalorean”, is a graduate of the Chitrakala Parishath College of Fine Arts, and has been working in the design industry for more than 16 years.

“Art has been my fascination since i was very young. I remember distinctly drawing on the red oxide wall of my house, which became my canvas to practice my drawings.”

The habit of sketching street scenes has been an old one for Ranganath. “In college, we had to submit sketches as a practice everyday,” he says, “I would invariably end up at a market trying to study people going about their daily lives.”

Years later, he stumbled upon an idea to recreate a cart he has been frequenting for long, and illustrate all its elements from his memory. Gangamma’s cart was the first in his series dedicated to the quintessential push carts (thela) of India.

“They are the superstars on the streets that are ubiquitous on most Indian cities yet very understated,” he explains, “From colourful flowers to fresh vegetables, shaved ice golas to flavourful snack, they form the cultural lifeline, fulfilling the essential needs of any household across all Indian towns.”

For Krishnamani, push carts also bring back strong memories of childhood cravings and life’s simple pleasures. “The thought of rushing out on to the streets upon their arrival is truly nostalgic,” he says.

Also Read: This is What Happens When a Photographer, an Artist and Mumbai Come Together