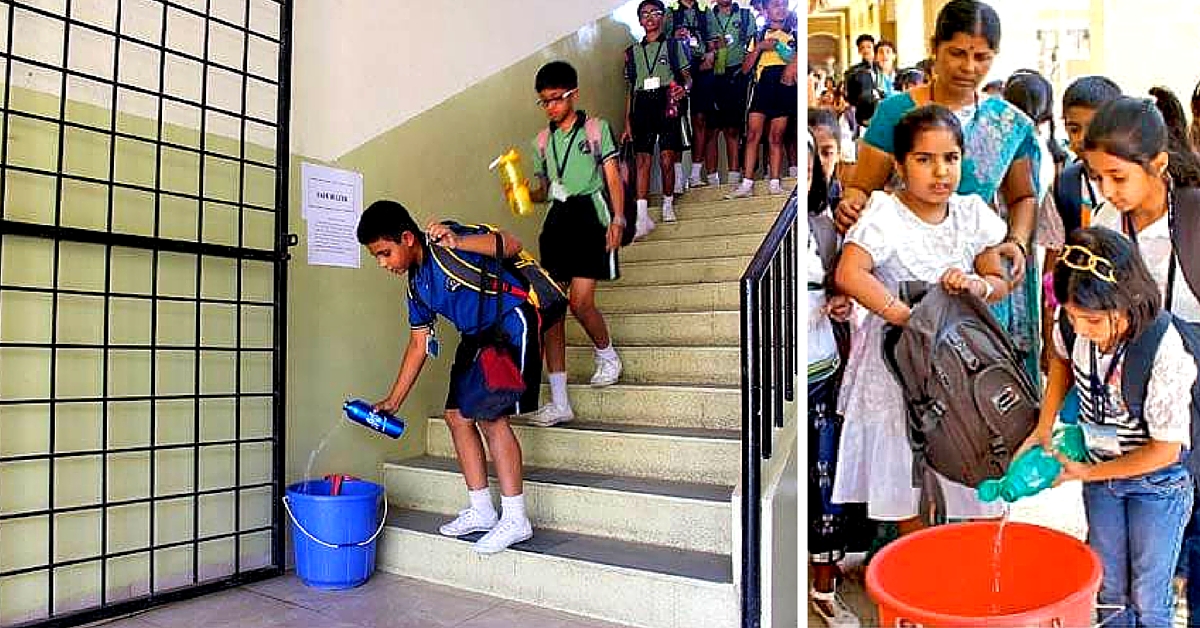 Children across Maharashtra’s schools are implementing this simple but highly effective method of conserving water, at a time when the rest of the state is reeling from drought.

Maharashtra is in the grips of a dry spell this year. According to government statistics, there is only 19% water left in the dams in the state. But some school children have set into action with a simple plan for water conservation. If other schools in the state, and in the country, follow the simple yet powerful idea, the impact could be tremendous.

In Pune, 7,000 schoolchildren are now empowered to save and conserve water. What they do is simple: they collect leftover water from their water bottles in a large drum installed in their school. This water replaces the fresh water used to water the plants and clean the school premises.

An effective strategy that reduces water consumption, it also has the dual purpose of educating young impressionable minds about the importance of conservation.

The campaign is the brainchild of entrepreneurs Vedant Goel and Yusuf Soni. So far, their efforts have reached out to 7000 schoolchildren in Pune. “Our aim is to reach 10,000 children. Our campaign aims to educate kids about the importance of water and also make sustainable use of the available resources,” said Vedant to YourStory.

The socially conscious duo, who made it into the Limca Book of Records for a dental health drive that brought together 1011 students, also ensure that the children are well educated about water problems in India. They conduct workshops at the schools every Saturday, where they have an open discussion with the kids on saving water. “We want to do this forever,” said Vedant. “Water is a long-term problem. If further damage has to be curbed, educating children can really go a long way.” He added that the children are more likely to spread the message to their family and neighbours and encourage a whole lot more people to save and reuse water.

Also Read: This Man Will Show You How to Conserve Water and Prevent Weeds by Growing Plants in Tyre Tubes

Currently, Pune schools such as Dada Gujar High School, Sadhana High School and Vidya Niketan High School have been inducted as part of the campaign. The leftover water collection drive also extends to the staff working at the schools, to encourage students.

Two years ago, City Pride School in Nigdi, Pune, suffered from a case of water shortage. Ashwini Kulkarni, the school director, said to Pune Mirror, “We had no water to mop and flush, forget watering the plants and the lawn. The garden had dried up. A limited budged restricted us from availing of water tankers on regular basis.”

In a meeting with the school’s staff, Sakina Bootwala, who heads the environment committee, said that they estimated that children would have 200 millilitres of water left in their bottles at the end of the day. “Collecting it instead of wasting it made sense. This way, 300-400 litres of water would be saved everyday,” she said.

City Pride School then installed 12 buckets at six of its exits, and has collected water that is used for the gardens.

“Previously, we had to close down our kitchen garden project. Now, with availability of water, students have harvested tomatoes, lady fingers, spinach and many such vegetables. All trees and bushes are now in good shape,” said Bootwala.

Similarly, another school in Mumbai has taken forward the idea of collecting leftover water. The Vidyanidhi Educational Complex also set up a large storage drum for water collection in its campus. What’s more, the school has appointed a few students to be a part of a ‘water conservation squad’, an initiative that excites children, especially with special badges on their uniform.

At the end of the school-day everyday, students are encouraged to pour out all the water left out in their bottles into the drum. Laxmi Shetty is a fifth grader in the school who is quite enthusiastic about the campaign. “We store the leftover water from our water bottles in the water bank,” she says to DNA, “Every child has to do this without fail before leaving the school.”

Chirag Jadhav, in Class 8, is a part of the squad which keeps a lookout for leaking or open taps all day. “There are 20 students in the squad, from Std V-IX. We check taps in the morning – if they are open or leaking – and also before and after recess and end of the day,” he says, his eyes brimming with pride.

The school has managed to save up on their water bills, and realising the drought situation faced by the rest of the state, put this plan into action at once.

“We used to pay Rs 20,000 every month to get potable water tanker for the school,” says Dr Kitida Mehta, secretary of VEC. “Now, this initiative is not just helping to save water but also creating awareness among children.”

Indeed, there’s no better learning experience for children, as they realise the impact their little actions make. Like the schoolchildren of Cathedral & John Connan School in Mumbai realised after collecting Rs 15 lakh for helping people who are suffering from the drought. “It was a presentation on the drought in Marathwada by a former student, who is a media professional, that brought home the scale of the crisis,” says the school’s principal, to India Times. Alarmed by the seriousness of the situation, the students set about raising funds: selling t-shirts designed by them, even taking the money set aside for events. The entire amount was handed over to Naam Foundation, an NGO run by Nana Patekar and Makarand Anaspure.

These schools in Maharashtra might just be the tip of the iceberg, as more schools begin to adopt this effective water conservation strategy.

Also Read: India’s Water Warrior Has a Solution for India’s Droughts. The Best Part – We Can Play a Role Too!