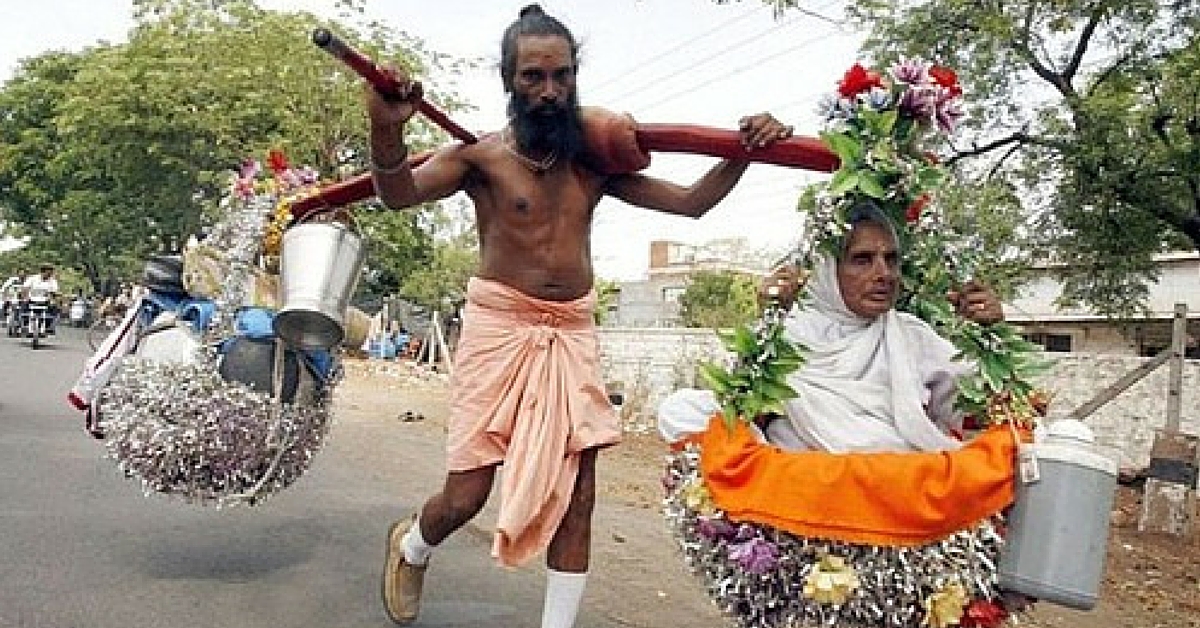 In an age where elders lament their children have forgotten how to show respect, or are downright cruel to aged parents, comes along this man who will give you goosebumps for the devotion he shows his 92-year-old blind mother.

It was many moons ago, more than 20 says Kailash Giri Brahmachari, that his mother Kirti Devi expressed a wish to go on a pilgrimage of the char dhams – the four most sacred religious sites in India for Hindus.

Without missing a heartbeat, this man set out to fulfill his mother’s dream. He was in his mid-20s then. He is close to 50 now. And he has covered, on foot, a distance of over 36,000 km.

“When I was about eight years old, I fell from a treetop and suffered a fracture. Expensive treatment was not possible because of financial difficulties. It was then my mother prayed for my recovery. She vowed to undertake a journey to some of the religious places, if I was cured. Her prayer bore fruit and I recovered quickly and that too without any medicine. She could not perform the thanksgiving trip for one reason or the other. But when I turned 24, I started taking my mother to religious places,” Kailash is reported to have said.

Much like Sharavan Kumar, whose story from the Ramayana is legendary, Kailash too carries his mother in a double basket slung over his shoulder. While his mother sits in one of the baskets, Kailash keeps all his clothes, utensils and other heavy day-to-day items in the other to balance the weight. He walks four to five km like this every day, beginning his day at 6.30 am, resting in the afternoons and walking again when the sun becomes less unsparing. Mother and son then rest for the night at some roadside temple or the other.

Kailash cooks food from whatever people offer him, and serves it to his blind mother first.

Their journey, which has taken them across the length and breadth of the country, has covered most of the well-known temples and holy cities in India: Rameshwaram, Jagannath Puri, Tirupathi, Ganga Sagar, Basukinath Dham, Tarapith, Badrinath, Kedarnath, Hrishikesh, Haridwar, Kaashi, Ayodhya, Chirtrakut, Allahabad, Narmada, Pushkar – a long long list indeed.

Currently in the Agra-Mathura area, Kailash told Times of India that they are now on the last leg of their pilgrimage, after which he hopes to return to their village Wargi in the Jabalpur area of Madhya Pradesh. “I have to complete this yatra, both for myself and my mother. I have travelled for 20 years, I will walk for a few more,” he said, adding “My mother has no one except me. My brother and sister died and my father passed away when I was 10 years old. Who else could have fulfilled her wish, except me?”

Although Kailash receives much praise for his love and allegiance towards his mother wherever he goes (people even seek his blessings), he does not like being compared to Shravan Kumar. “After seeing me, if a few youths start respecting their aged parents and see almighty in them, I will be satisfied,” is all he says.

We wish Kailash and his mother much luck and success in completing their pilgrimage and making it home safely.