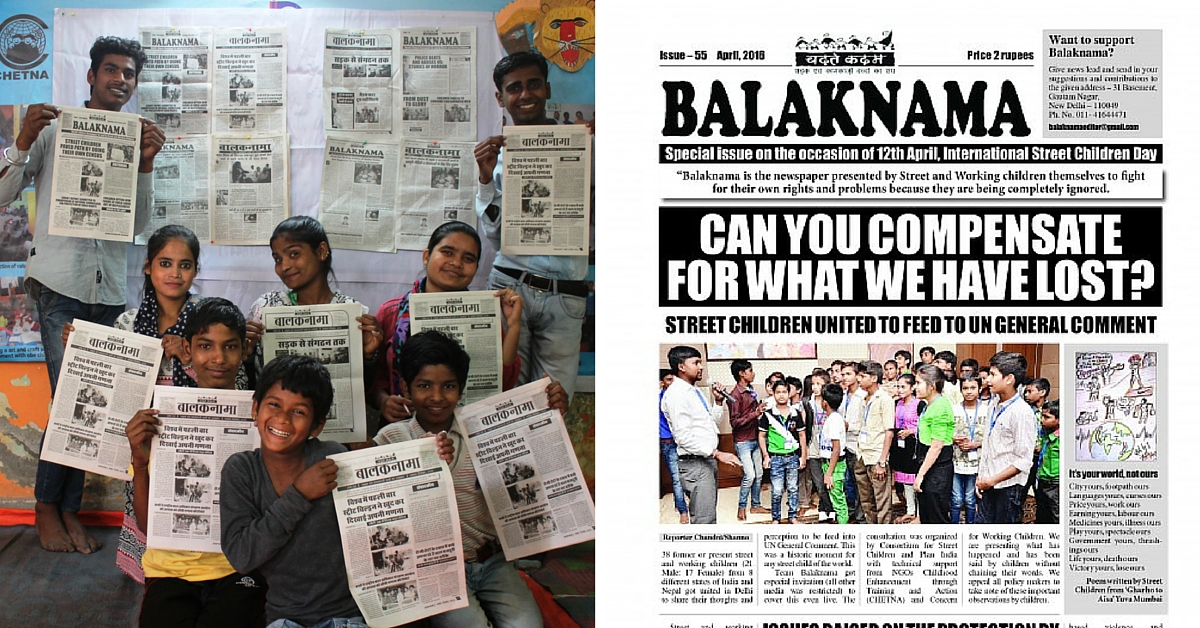 A newspaper written and published by street children in Delhi helps them tell their stories and fight for their rights. Balaknama is, literally, the ‘voice of children.’

Balaknama has been in circulation since 2003. It is a unique newspaper, written by and for street children. The story of how it came to be published is very interesting and deserves to be told. Today, this publication touches the lives of almost 10,000 street children.

Childhood Enhancement through Training and Action (CHETNA) is a public charitable trust founded in 2002. This organisation empowers street children in many ways and one of its main points of focus is education. It helped the first bunch of street children it supported to form a federation of their own, which they call Badte Kadam.

“Badte Kadam is a federation of street and working children, formed by a core team of 35 children. An identity for every child is their main aim. Every child who grows up on the street has his or her own story of pain, sorrow, horrific incidents, and joy. These stories are shared among these children, without much hesitation,” says Sanno, the former editor and present adviser to Balaknama.

Initially, these children tried sharing the stories of their lives with many print media houses but that effort did not pay off. So the children started a newspaper of their own — called Balaknama or the ‘voice of the children’ — which they hoped would reach other street children and government authorities who could help them. Balaknama’s first issue was a 2-page Hindi edition paper, printed once every three months. Soon, it became a 4-page paper and then an 8-page one. Today, it is a 16-page monthly newspaper and, in 2014, the kids were able to start publishing in English too.

“At the beginning of every month, an action plan for the work to be done for the following month’s edition is drawn up. The reporters, who are children themselves, generally stick to the plan without any deviation. The team consists of 70 ‘batuni reporters’  or vocal reporters, and 14 ‘writer reporters’,” says Chandini, the present editor of Balaknama.

If a batuni reporter has a story to tell, he/she connects with one of the writers and the story is shared either on the telephone or in a face-to-face meeting. Batuni reporters are usually young, uneducated children who cannot write their own stories. These children are encouraged to study and learn how to write and soon they are capable of joining the team of ‘writing’ reporters.

The reporters compile the stories and write them out on paper for Chandini and Sanno to work on.

“The Balaknama team have an office of their own, where they have regular meetings of Badte Kadam too. Sanno, who was the previous editor, had to relinquish the position after she turned 18. However, she is the one who types out all the stories onto the computer and, between Chandini and Sanno, spellings and other mistakes are checked and corrected,” says Jyoti, one of the many reporters.

Shambu usually handles the camera owned by Balaknama, although the kids sometimes take pictures with their mobile phones too. He says, “Pictures are taken for most stories. However, should a child feel that his photograph should not be published or that his story should be published without a picture to support it, his wish is adhered to. Other reporters too get an opportunity to handle the official camera. The camera is usually circulated amongst us, though I do most of the photography.”

On the 25th of every month, all the reporters meet up at the Balaknama office to discuss their stories and decide on how the pages will be laid out. Once the plan is agreed upon, the newspaper is sent to the printer. Circulation of the printed copies is limited. Very few are kept in newspaper stalls for people to purchase. The paper is meant for the children who are part of Badte Kadam, as the stories concern them or are about them. The paper is also circulated among the parents of these children, the policemen in the local area and other NGOs in the region.

Many people like to subscribe to the paper online and they are sent soft copies of every issue.

All the children attend school or tuition classes in the morning hours. After 2 pm they are free to do their work for Balaknama. Since all the reporters are below the age of 18, they do not get any remuneration for their work. Once the children attain the age of majority, they are given a choice to either continue to support the paper on a salary basis, to work with CHETNA, to undergo higher studies, or to take up any other job.

The Balaknama team would like their stories to be read and heard by a larger number of people, with a view to getting help for these street children. You can subscribe to the newspaper by writing to balaknamaeditor@gmail.com

About the author: Aparna Menon is a freelance writer, writing for various newspapers for the past 10 years. Her main fields of interest are wildlife, heritage and history. A keen traveller, she loves to read and write and does a lot of art work too.
Promotion