Remembering Barun Biswas, the Hero Who Raised His Voice Against Rapes When No One Else Could

Barun Biswas was 39-year-old when he was shot dead on July 5, 2012, in a parking lot outside the Gobardanga railway station in West Bengal. A teacher, an activist, and most importantly a very kind man, Barun is still remembered for his incredible and laudable courage.

Barun Biswas was 39-year-old when he was shot dead on July 5, 2012, in a parking lot outside the Gobardanga railway station in West Bengal. A teacher, an activist, and most importantly a very kind man, Barun is still remembered for his incredible and laudable courage.

The reason why he was murdered? For raising his voice against the members of a local criminal gang, who were using gang-rape and murder as a way to terrorise people in Sutia village. 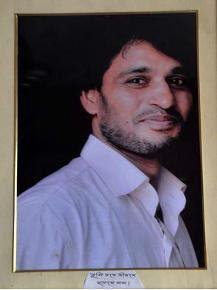 The year was 2000 and the residents of Sutia in West Bengal were terror-stricken. Frequent rapes in the region had left them both angry and extremely scared because there was no way to protest. According to a report in The Times of India, the criminals led by Sushanta Choudhury were using sexual torture as a weapon to dominate the villagers.

“Women were being raped and molested in front of their husbands and children. We were forced to pay for even for a puja at our home. The gang enjoyed political support and no one could stop them,” Hitlal Bayen, one of Barun’s neighbours told TOI.

Anyone who protested was gang-raped or murdered. Official reports said that 33 rapes and about a dozen murders had taken place between 2000 and 2002, but the locals knew that the real numbers were far worse. Most of the victims were too scared to complain.

And when the police did not come forward to help, it was Barun who decided to break the silence. He co-founded an organization named Sutia Gonodhorshon Pratibad Mancha with a group of villagers, to protest against the gang and to fight crime. Selfless and courageous, Barun marched forward like a ray of hope for the villagers.

“If we can’t protect our daughters, sisters and wives, then we shouldn’t be living in a civilized society. If we lack the courage to take on the rapists, we deserve a more severe punishment than they do… so come and join us to protect the honour of our women,” was his battle cry.

His organization started conducting public meetings to protest against the gang. Initially a team of seven people, they were going from door to door to motivate people to raise their voices. And this gave courage to many others. He was the spark that the villagers needed to break the barrier of fear and start protesting. Barun helped the rape victims in reporting to the police, which finally led to the gang members being arrested. Five criminals, including Sushanta, were sentenced with life imprisonment.

It is reported that Barun gave a copy of a book by Ramakrishna Paramhansa to Sushanta when he was being arrested and advised that he should read it in jail. Over the years, Barun also counselled the women who were survivors of rape, and rehabilitated them in the society.

Soon after he began the protests, Barun started receiving several threats. He used to avoid going out after dark and even chose to never get married because that might have put his family in danger. According to reports, one of Sushanta’s aides who was arrested for murdering Barun had confessed that the order came from their leader from inside the jail.

“Barun knew his life was under threat but he didn’t bother. He always had a daring streak. He looked like the boy next door but believe me, he had nerves of steel. He was scared of no one and he loved helping people, often at the cost of his own comfort. Barun kept nothing for himself, other than his bed which he would give away to the students he helped. A year ago, he finally gave it to a neighbour and would sleep on plastic sheets. Even the man who pointed him out to the assassins at Gobardanga station had received rice from him a week ago,” said Barun’s elder brother, Asit Biswas.

Born on September 12, 1972 in Sutia, Barun was a school teacher by profession. After finishing school from Panchpota Bharadanga High School, he went to Gobardanga Hindu College for a Bachelor’s degree in Bengali. His did MA from Calcutta University and then a BEd from B.T. College, New Barrackpore. He also passed the West Bengal Civil Service exam, but instead of opting for a comfortable life, he chose a career in social work and education. He started working as a school teacher at Mitra Institution of Kolkata in 1998.

Barun was always committed to social service. He helped poor children study, took care of the elderly, helped those who were looking for jobs, and also campaigned for the construction of a canal to prevent floods in Sutia and nearby areas.

He successfully showed the world that a lot can be achieved once you give up fear and choose to walk on the path of truth and goodwill.