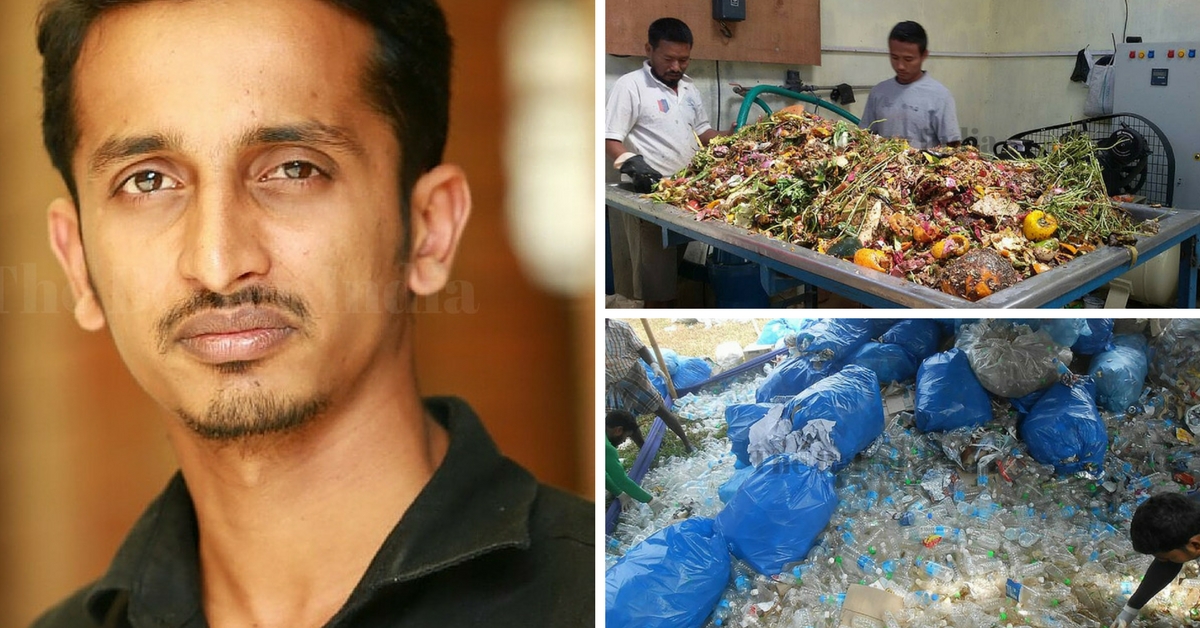 A student, a ragpicker and a social entrepreneur. Here’s the inspiring story of Jabir Karat.

Jabir Karat was born in a small village called Puthuppadi in Kerala, nearly 45 km away from Kozhikode city. He grew up an ordinary boy and finished high school at the government school next to his house.

Jabir was all set to enrol himself in a local college when he got a scholarship to go to Delhi and study at Zakir Husain Delhi College. Jabir decided to move to there and study history. This was when his life took an interesting turn.

“I was a villager from Kerala. I didn’t dress as well as the others. My English wasn’t good and I certainly wasn’t as strong as the others academically. Though my five years in Delhi were enriching, they were also challenging for me as a person as I often felt like I wasn’t good enough,” he says.

After graduation, Jabir went on to do an MA in the same subject from Delhi University.

“I had two options in front of me. Either opt for the civil services, which was not my cup of tea, or do a PhD. I thought long and hard and realised that most scholars end up researching some mundane topic or the other for five years. Only a few of them actually come up with theses that can make a difference to the lives of others,” he adds.

Jabir was certain he wanted to do something more actionable. It is around this time that he was selected for the Gandhi Fellowship. Jabir credits this two-year residential programme for changing his life.

“It was the best time of my life. It just changed my entire thought process. I spent two years coaching headmasters in government schools in Mumbai to bring about change. During this period, I also got to live in a slum. I saw the real underbelly of India and was exposed to all kinds of realities,” he elaborates.

The experience inspired Jabir to embark on a career that was meaningful. After spending seven years away from his home state, he was ready to go back to Kerala and start a social enterprise.

Jabir was in search of a sustainable business idea. He started researching the biggest problems our country would face in the next 10 years. And he decided to focus on the burgeoning problem of waste management.

In order to get a firm grasp on the subject, Jabir went to Coimbatore for three months and trained under Vellore Srinivasan, Project Director of Indian Green Service, a solid and liquid resource management company. Here, he worked as a ragpicker.

“I used to go every morning to pick trash, segregate it and then take the biodegradable waste for composting,” he says.

Once his three months were up, Jabir felt he was ready to take on the challenge of starting a new business. Green Worms started in the small town of Thamarassery in Kozhikode district. The team leased out a one-acre plot to segregate waste and also set up a composting unit.
Usually, the shopkeepers in the area would just dump their waste on the roadside or throw it in the river. Jabir convinced them to dispose of their waste responsibly. His three-member team started the process by managing the waste of shopkeepers and traders. Green Worms would charge them a small service fee for the same.

However, this didn’t last long. Most shopkeepers realised that irresponsibly dumping their garbage somewhere and forgetting about it was much cheaper than actually paying to get it managed.

This was a lesson for Jabir and his small team. They then decided to include other services in what they offered.

“If you give me 1,000 kg of waste, I can pick out 900 kg that is recyclable. What we require in this country are decentralised waste processing units. Right now, everything is taken to one centralised unit. Not only does this involve hefty transportation and labour charges, but it also leaves us with a huge pile of garbage to tackle,” he says.

They also conduct weddings and other functions on the ‘zero waste’ principle. For the functions, they provide recyclable plates made from ceramic, steel, etc. If the client wants disposable plates, they provide plates and glasses made from arecanut. As an alternative, they also encourage people to use the traditional banana leaves while serving food.

Green Worms also disposes of the waste at these events. The organic waste is taken to its processing unit and converted into compost.

Their work has gained a lot of traction and people keep calling them to tackle the waste generated at events.

“We got through IIM’s first round of interviews for incubating our organisation. We are quite hopeful something will come out of it. As of now, I’m just looking to get a business plan in place so we can scale this model. In the future, we also plan to branch into consultancy to help others set up sustainable waste management practices in the state,” he concludes.

Jabir can be contacted at jabirkarat@gmail.com

Written with inputs from Rifa Sanbaq.