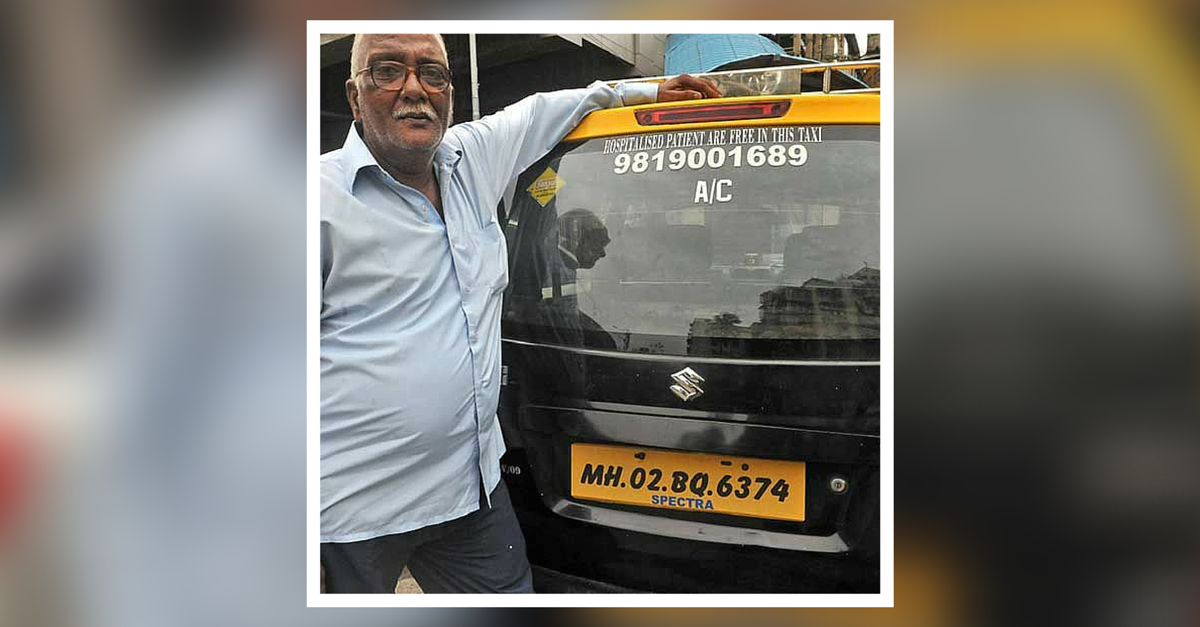 When Vijay Thakur, a mechanical engineer, lost his first child just because he did not get a taxi to get to the hospital on time, he left his job. To become a taxi driver who would help the needy.

Vijay Thakur was working as a mechanical engineer with Larsen and Toubro, Mumbai, in 1982. He earned a handsome salary. Once married, life became even better with his wife Saroj by his side. They soon learnt they were going to be parents too and Vijay’s joy knew no bounds.

But one night in March 1982, when Saroj was just 3 months pregnant, she had pain in her abdomen. Vijay rushed out to look for a cab to take his wife to the hospital.  It was 2 am and no taxi was ready to stop for him. He kept waving and pleading but did not get a taxi. Finally, he ran till Andheri station and brought a taxi back home by paying Rs. 300 (almost like paying Rs. 3000 in today’s money) to take Saroj to Nanavati hospital. But, unfortunately, by the time they reached the hospital Saroj had a miscarriage.

Vijay and Saroj lost their first child just because no taxi driver was willing to do his job. Vijay was thoroughly shaken up by the tragedy. He kept thinking no one should go through the same experience his wife and he did.

“I was earning quite well then and so I could afford to at least pay double and get a taxi. But I started thinking about those people who cannot even afford to hire an auto rickshaw,” says Vijay.

Vijay now wanted to do something for such patients. But his long hours at work did not leave him with much time to think. He was still struggling between his career and his desire to help people when Larsen & Toubro introduced a voluntary retirement scheme in 1984. Thakur took up the offer and decided to become a taxi driver, promising himself that he would never decline a passenger. He bought a Fiat car for Rs. 66,000 and got a taxi permit.

He made himself available to passengers always.

“I don’t sleep between 2 am and 4 am because that is the time an emergency patient may need a taxi,” says Vijay.

Despite opposition from his wife and family, Vijay kept doing his work. But then, life again took a tragic turn in the year 1999 when his younger son was hit by a ball on his knees while playing cricket. Initially, his wife and he ignored the injury, thinking it was just a small cut. But within a week the knee had swollen so much that they took him to a doctor. There, the small cut was diagnosed as cancerous and the 19-year-old boy left within 16 days.

Vijay was devastated; he had spent all his savings on his son’s treatment.

“Once, I had to pay a bill for Rs. 43,000 for my son’s treatment. I was short by Rs. 10 and the cashier refused to accept my money. A stranger offered me the balance and only then did the cashier take the money and issue a receipt. This incident strengthened my resolve to help people in need,” says Vijay.

After this incident, Vijay stopped charging fares from poor patients and painted a sign to the effect on the rear window of the taxi. Anyone in Mumbai can give him a call any time and he never says ‘No.’

When asked about his most memorable experiences, he describes quite a few. One of them happened almost 15-20 years back. He was driving on the night of December 31, around 3 am, when he saw a car ramming into a tanker. When Vijay looked inside the car, there was a couple along with an 8-month-old baby girl. He rushed them to Cooper hospital immediately. Unfortunately, the mother died but the father and the child were saved because they got treatment on time. The lady was wearing jewellery worth Rs. 2 lakhs, which the doctors gave to Vijay. Once the victim’s relatives arrived at the hospital, Vijay handed over the jewellery to them and left. Later, he came to know the accident victim was film producer Sudhakar Bokade’s wife. Mr. Bokade offered him money once he was back home with his daughter but Vijay refused to take anything.

“I don’t do this for money or publicity. I don’t remember the people who I have helped once they are fine,” says Vijay.

Vijay Thakur was felicitated by Mr. Amitabh Bachchan on his show Aaj ki Raat Hai Zindagi, where he met his all time favourite star Jeetendra.

“It was one of the happiest moments of my life. I never ever thought I could meet Jeetu ji. I am a huge fan. I used to bunk school and watch his movies. I have watched the movie Farz some 31 times just because of Jeetendra,” says Vijay.

But this man, who left his lucrative career and took up the job of a taxi driver, helped more than 500 needy patients and ferried thousands  to their destinations without any complaints, needs your help now.

He is 73 years old now and was recently diagnosed with cervical spondylitis.

“The doctor said it needs to be operated on. He also said that I will either die or will be paralyzed after this operation. But people say I have so many blessings, nothing will happen. I believe them,” he says.