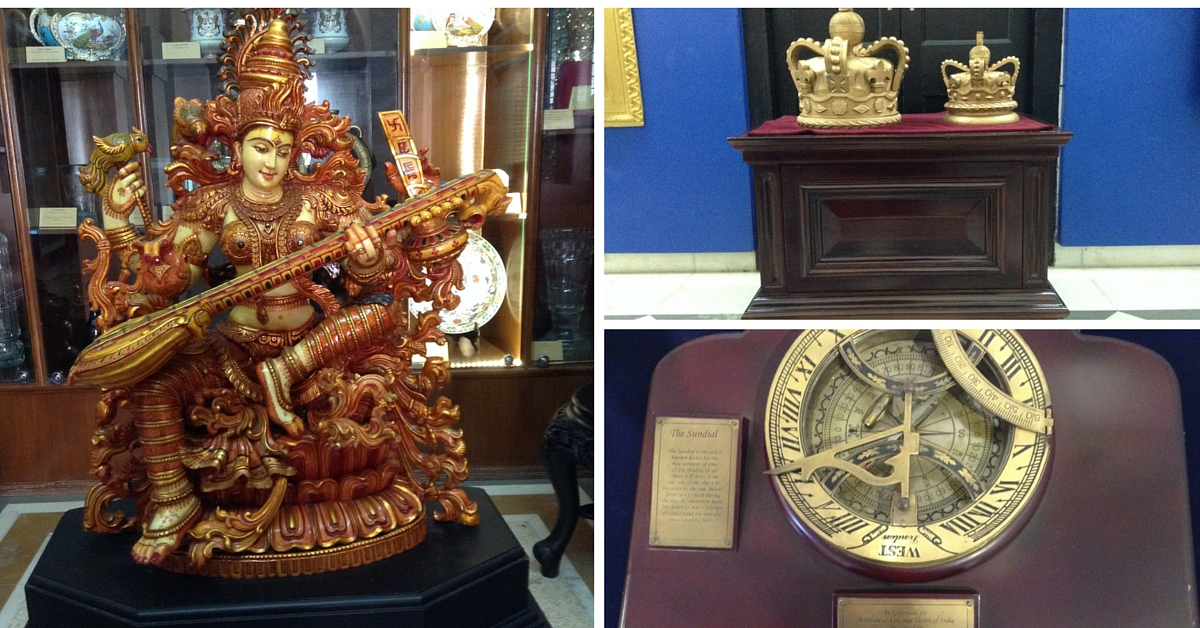 The President of India receives gifts from foreign heads of state when they visit India. These gifts then become the property of the Government. Earlier, these gifts used to be on display in the Gift Gallery of the Rashtrapati Bhavan. Shri Pranab Mukherjee, the current President, decided it would be better to have a separate museum for the gifts and other precious memorabilia, and shifted the collection out of the gallery. Learn more about this recently established museum within the Rashtrapati Bhavan premises.

An old horse stable, which had not been in use for many years, was converted into a museum to house these precious items.

Since 1950, when Shri  Rajendra Prasad became the first President of India, our Presidents have received almost 11,000 gifts from various parts of the world. These gifts are stored in what was once called the Tosh Khana, a storage space within the Rashtrapati Bhavan premises.

The gifts used to be put on display for visitors in the Gift Gallery within the Rashtrapati Bhavan, on a rotational basis.

“The layout of the present museum is indeed very interesting. Each cubicle or stall where a single horse would have been housed at some point of time, has been decorated with gifts and is marked as an enclave. All in all, there are 22 such enclaves, which are little gift galleries. One portion of the museum is called the Arms Gallery. It was here that in times of yore the food for the horses used to be stored. The coach house is the most important part of the museum. Earlier, this was where the coaches used to be kept. Now there are two coaches here and of course there is a lot more to see,” says Roshan Kumar Singh, an in-house volunteer guide at the Rashtrapati Bhavan.

The first eleven enclaves have on display gift items like the statue of Saraswati received recently from West Bengal and the golden dagger with precious stones presented to Shri KR Narayanan by the King of Morocco.

One of the enclaves has gifts received from various military institutions, the President’s Standard being one of them. In the enclave that has silver plaques received by various presidents, there is a silver cigar box with gold clasps with the initials of Dr Zakir Hussein engraved on it.

“An acrylic horse was presented to Smt. Prathibha Patil to commemorate Ashwamedha 2007 in Nashik,” continues Roshan.

Two of the enclaves have replicas of temples placed in them – temples like the Uttara Malai temple and the Golden Temple. There is also a picture of the Sleeping Buddha of Dushanbe.

There is one enclave that displays various postal stamps issued by the Government of India and released by the various Presidents of India.

“The Arms Gallery, which comes right after this, depicts the British Sikh War on one side and the Afghan British Battle on the other. In the next section, various important rooms of the President’s Palace are painted on the wall and old furniture used by the British as well as the earlier Presidents is on display,” says Roshan.

Replicas of the crowns worn by King George V and Queen Mary during the Delhi Durbar are placed in another gallery.

Another enclave has commemorative coins issued by the Government of India and seven ancient coins have been gifted by the Reserve Bank of India. The Blue Gallery has the original telegram sent by Harry S Truman, the President of the United States, to the First President of the Union of India. A beautiful sundial presented by the people of Uttaranchal to President APJ Abdul Kalam is displayed here too.

There are pieces of rocks from Mount Everest and the moon on display as well.

The last section of the Rashtrapati Bhavan Museum is the Coach House. There is a Hunting Coach and the Victoria Coach of British times on display here. This portion of the museum tells the story of Delhi through the ages. There are ancient pictures of Old Delhi, which give a true perspective of how the city used to be.

Models of all thirteen Presidents can be seen as well.

Finally, there is a small section dedicated to the Father of the Nation, Mahatma Gandhi. There are a couple of pictures of him, a khadi cloth made by him, his charkha, and also some flower petals strewn over him before his body was cremated.

“Very soon, the second phase of the museum will come up right across from this building. This is going to be a lot larger and will hopefully be able to house all the other gifts of the Presidents that are presently in the storage facility,” adds Roshan.

About the author: Aparna Menon is a freelance writer, writing for various newspapers for the past 10 years.
Promotion