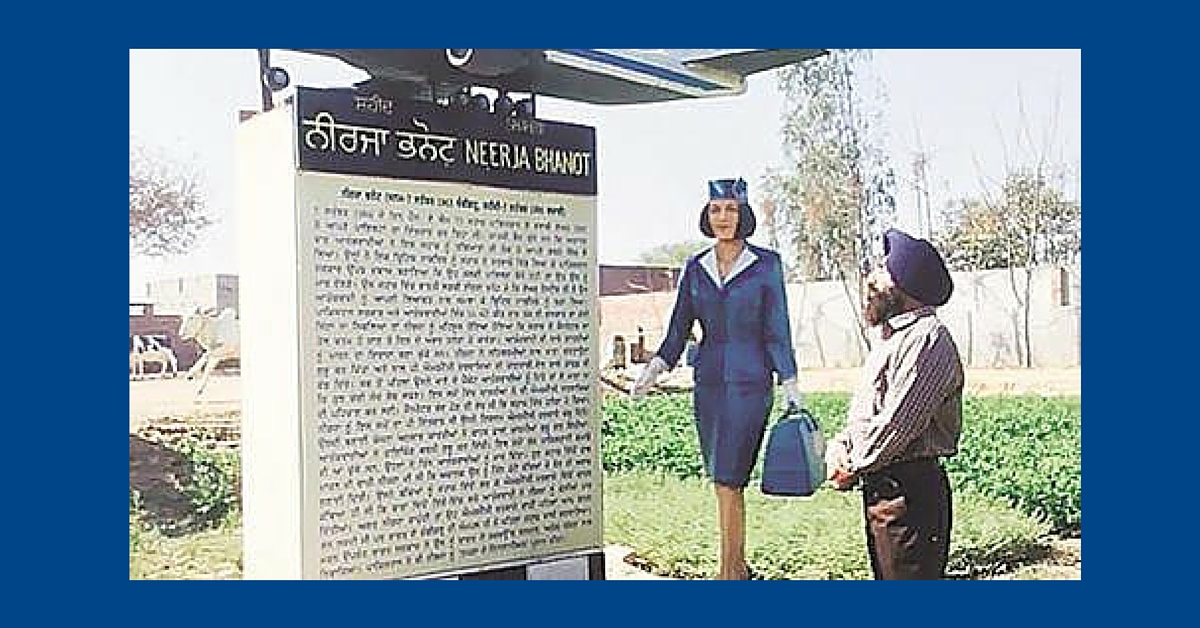 In the middle of lush greenery and the yellow mustard fields of District Moga in Punjab, lies the small village of Ghal Kalan. Much before the release of the recent biopic on Neerja Bhanot, chief purser on the hijacked Pan Am flight in 1986 who saved the lives of 300 passengers, this village had already immortalized her.

Meet Manjit Singh Gill, the artist who created her life-size sculpture and placed it in a park he named Mahaan Desh Bhagat Park.

“It is the only memorial in the entire nation built in her memory. I was really inspired by the sacrifice of this young woman when I decided to make her statue in 2013. In the past three days, people have been coming and saying that they watched the film and hence want to see her memorial too,” he told The Indian Express.

It is not easy to reach this small village in the middle of nowhere. Situated on the Moga-Kotkapura road, it is an easy one-and-a-half hours away from the nearest city of Bathinda. Yet, over 2000 people visited the village this past weekend to see Neerja’s memorial. The numbers included a group of 30 visitors from Tamil Nadu, retired government servants and students, who had recently seen the film on Neerja, India’s youngest recipient of the Ashok Chakra.

Manjit says he started working on this statue after conducting a survey in 2013:

“It shocked me to find out that in colleges, schools and other places, people actually knew little about Neerja. Except for a few in Chandigarh, none of the respondents even those in Delhi were able to answer as to who she was. This despite the fact that she was given the Ashok Chakra. Then I studied about design of the uniforms and the airplane that existed that time. It was important to add authenticity to the whole look. The memorial was completed and put on display in 2014.”

Manjit did his Bachelor of Fine Arts and then a Master’s from the Government College of Arts in Chandigarh. He later worked as a Class 1 officer with the Punjab government before giving it all up to devote himself full time to sculpting. Apart from Neerja’s, the park has 40 more statues, including those of former President of India APJ Abdul Kalam, the Flying Sikh Milkha Singh, martyrs Shaheed Bhagat Singh, Rajguru, Sukhdev, and others. The park is located on Manjit’s own agricultural land and the artist has spent money from his own pocket to develop it.

Aneesh Bhanot, Neerja’s brother, said his family is grateful to Manjit for the memorial.

“This is the only one in the country as far as we know. There is one chowk named after her in Mumbai but no memorial. The movie has come at the right time. Youth can learn three things from Neerja: you should be scared of none; you should always do your duty and that there cannot be any compromise on self-respect. We are really thankful to Gill,” he told the The Indian Express.