This laser system is totally safe on the eyes say the scientists who developed LACSMI.

The Laser Science and Technology Centre (LASTEC), a DRDO lab, has launched a new system that has the potential to ensure warships, tanks and other weapons manufactured in the country have the right capabilities to evade laser and infrared guided bombs and missiles. It’s the first-of-its-kind laser system in the field of stealth technology.

The system named LACSMI ( Laser Cross Section Measurement and Imaging System), and pronounced as Laxmi,  was launched at the maritime exhibition at Vishakapatanam, held as part of the International Fleet Review 2016. 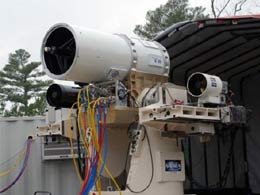 “This technology is in a nascent stage worldwide and no such system is reported in open literature or available inventory of any developed nation’s armed forces. This was developed indigenously and is an excellent example of ‘Make in India’ efforts,” said Dr. Ravindra Singh, Project Director at LASTEC, to Times of India.

It can also automatically track airborne and sea targets and generate video.

The system will be set up at Dolphin’s Nose in the naval dockyard in Vishakapatanam.

It will constantly send out a radar beam to pick up on targets and is totally safe on the eyes, say the scientists who developed the system.