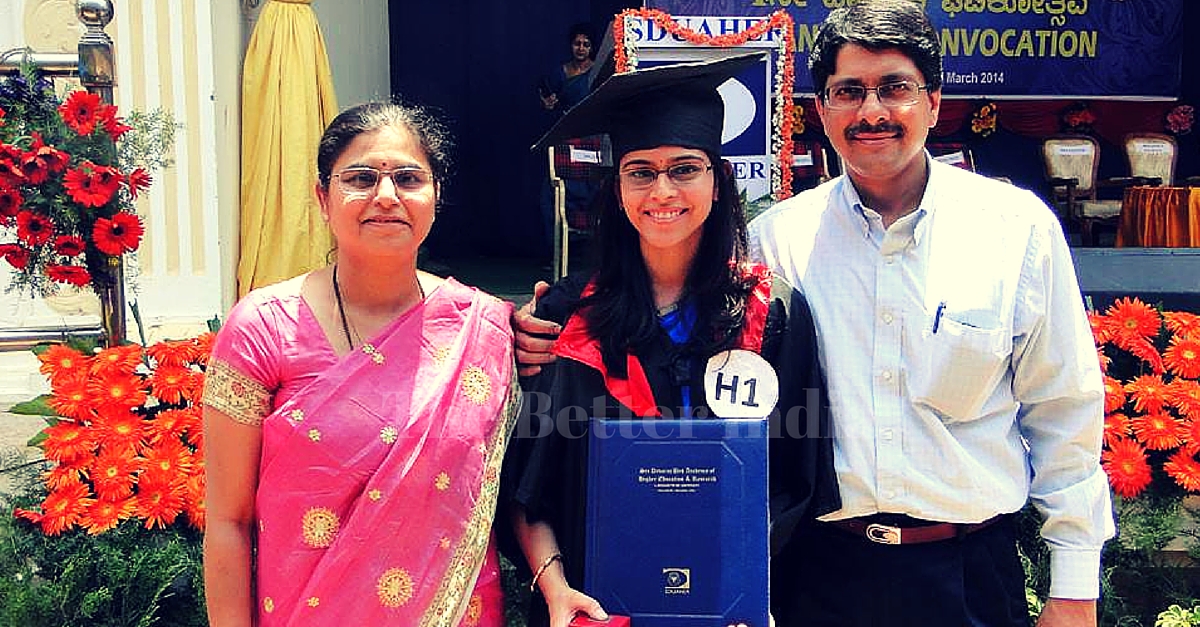 They lost their daughter in a gruesome road accident. But they have channelled their grief in the best way possible to help others. Meet the Tambwekars.

My candle is lit on both ends, it will not last the night

But oh my foes, and ah my friends

The Tambwekars lost their daughter Arundhati in a road accident in Vellore on September 9, 2014. Arundhati was on her way to Christian Medical College (CMC), where she was doing her PG Diploma in Clinical Pathology. Though she was riding pillion, she was wearing a helmet. The terrible condition of the road was possibly the biggest factor responsible for her death.

“My daughter Arundhati was everything any mother could wish for. She was beautiful inside and out. She was hardworking, gentle and intelligent. Arundhati studied MBBS at the Sri Devaraj Urs Medical College in Kolar and was the class topper. She was a wonderful Bharathnatyam dancer and a sensitive poet. She would often go out of her way to help others and she always put others before herself,” says Dr. Shubhangi.

Arundhati’s parents say that life without her felt meaningless.

After a while though, they realised they had to carry Arundhati’s memory and values forward in a positive way. And this is how the Arundhati Foundation, a non-profit trust, was set up in December 2014. The Foundation is funded by the Tambwekars with the money they had kept aside for their daughter.

The Foundation gives an award in Arundhati’s memory.

The Dr. Arundhati Tambwekar Award for Excellence in Pathology is a gold medal given to a graduate from CMC who scores the highest marks in in DCP, MD in Immunohematology and Transfusion Medicine, and MD in General Pathology.

“The decision is put to a vote in the Department. Not only does the recipient have to be academically brilliant, he or she also has to have a passion for the subject and the qualities that she valued,” says Dr. Shubhangi.

The winner of the first award was Dr. Eliza Koshy.

Dhwani is another initiative of the non-profit — the Foundation sponsors speech therapy or a hearing aid for one hearing-impaired person. The Foundation has partnered with the Rajan Speech and Hearing Clinic in Bengaluru for Dhwani.

The most ambitious and far reaching project taken on by the Foundation is called Vikram.

Through this initiative, the Tambwekars are creating awareness about road safety.

The focus is on accident prevention and repair of bad roads. The Foundation tries to influence policymakers and also attempts to get accountable parties to rectify the condition of the roads.

“I don’t believe in fate. When an accident happens, something is wrong. Either the roads are not in good condition or the driver is at fault. There is always some element that contributes to the accident. In fact, research tells me that over 97% of accidents are avoidable. A little discipline could go a long way,” says Dr. Shubhangi.

And a little discipline is what the Tambwekars are trying to instill in drivers. They believe that it’s easier to work with young and impressionable minds so they intervene at the school level. Every month, they take traffic awareness and road safety classes in schools across Bengaluru. For children in the age group of 5-10, they tell stories and show cartoons about the precautions to be taken. For the 12-16 age group, the Tambwekars show videos and educate children about the responsibility that comes with having a vehicle.

The Foundation also teams up with other non-profits like Save Life Foundation to raise questions on the city’s traffic black spots through RTIs and other civic channels.

“It is disheartening to see so many parents riding pillion when their underage children are driving scooters or bikes. If we don’t show our children the difference between right and wrong, who will?” Dr. Shubhangi asks.

If a complaint regarding a pothole has not been attended to despite repeated follow-ups, the Tambwekars themselves take some Shelmac and go fix the potholes.

The Tambwekars say they feel satisfied they have done their bit at the end of the day when people walk up to them and promise they will wear helmets and won’t use the phone while driving.

They have also managed to create an extended network called Friends of the Arundhati Foundation. These people, who live in different cities in India, manage to create awareness about road safety in their own way.

Dr. Shubhangi recalls the story of Sundararaman, the president of a school in Trichy, who got in touch with her through the Foundation’s Facebook page. He created road safely awareness among his students and recently told her that his school gave free helmets to all the students who come on bicycles to school.

“It is not easy for us to relive the death of our child every day. But if it helps create a sense of responsibility in others and makes a small change, then that is all we need,” says Dr. Shubhangi.

I will always wear a helmet when driving a two-wheeler

I will NEVER drink and drive

If I drink, I will NOT drive

If I need to answer or make a call, I will STOP

I will give pedestrians the first right of way

I will not allow my underage children to drive

I WILL OBEY TRAFFIC RULES

I will teach my children and friends the above