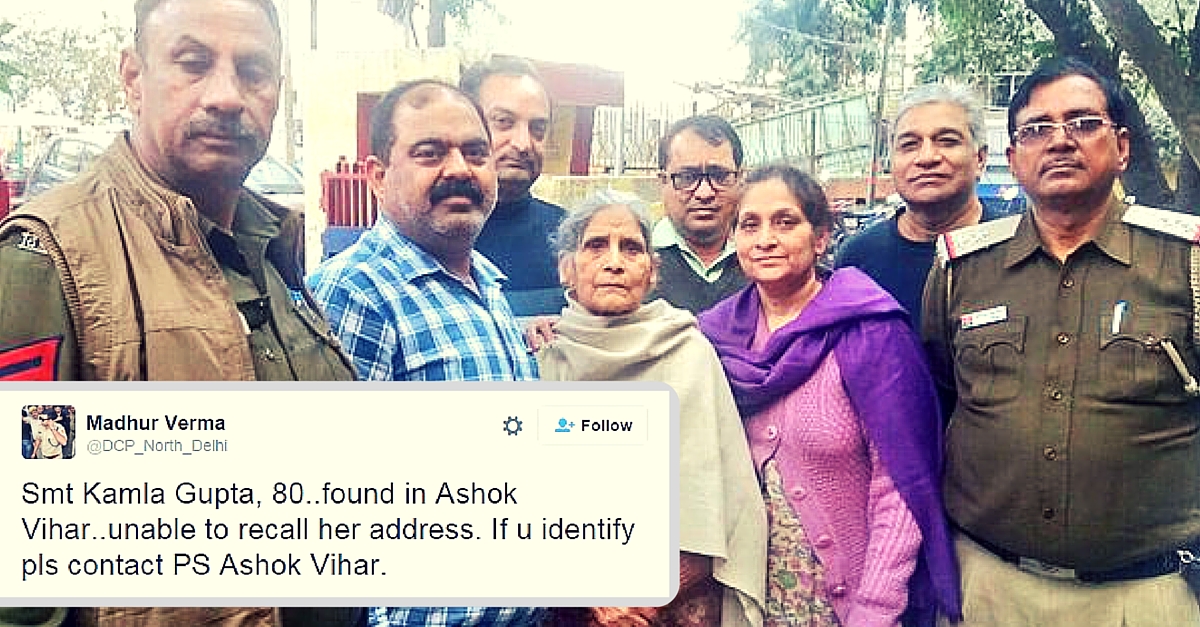 When an 80-year-old woman suffering from Alzheimer’s went missing, the police officials and Twitterati collaborated in an amazing way to reunite her with her family.

Kamla Gupta, a resident of Patel Nagar in New Delhi, left home to visit the temple on Sunday morning. But she lost her way back home and went in another direction. She asked somebody to drop her home, giving the address of a place in Ashok Vihar where she used to live with her husband 20 years ago. In Ashok Vihar, she again forgot her way and was found wandering by a patrolling police van. The officials took her to Ashok Vihar police station. As there was no way to find anything about her address or contact details, the North Delhi Deputy Commissioner of Police, Madhur Verma, sought help on social media.

He tweeted Kamla’s picture with the information on where to find her.

Hundreds of people, including Vishal Jain, a businessman from Pitampura, shared the picture on Facebook and Twitter.

And just when Kamla’s family members were planning to check the hospitals in the neighbourhood, one of their relatives saw Vishal’s post and contacted him. Vishal immediately connected them with the DCP.

According to the family members, she has been suffering from Alzheimer’s for the past three years.

Within two hours after the first tweet, Kamla was reunited with her family. All thanks to the power of social media.

That’s the power of social media. Thanks @TwitterIndia .Family members of Mrs Kamla Gupta traced in less then 2 hrs! pic.twitter.com/9NGw1MFFvG

Mrs Gupta identified!
Thanks to all of you including @urban_mogli. ? I’ve talked to her family members in Patel Nagar.They r about to reach.

It’s our duty. Though I request that entire family should be sensitised & somebody shud always accompany Mrs Gupta. https://t.co/lvy6cLmALq