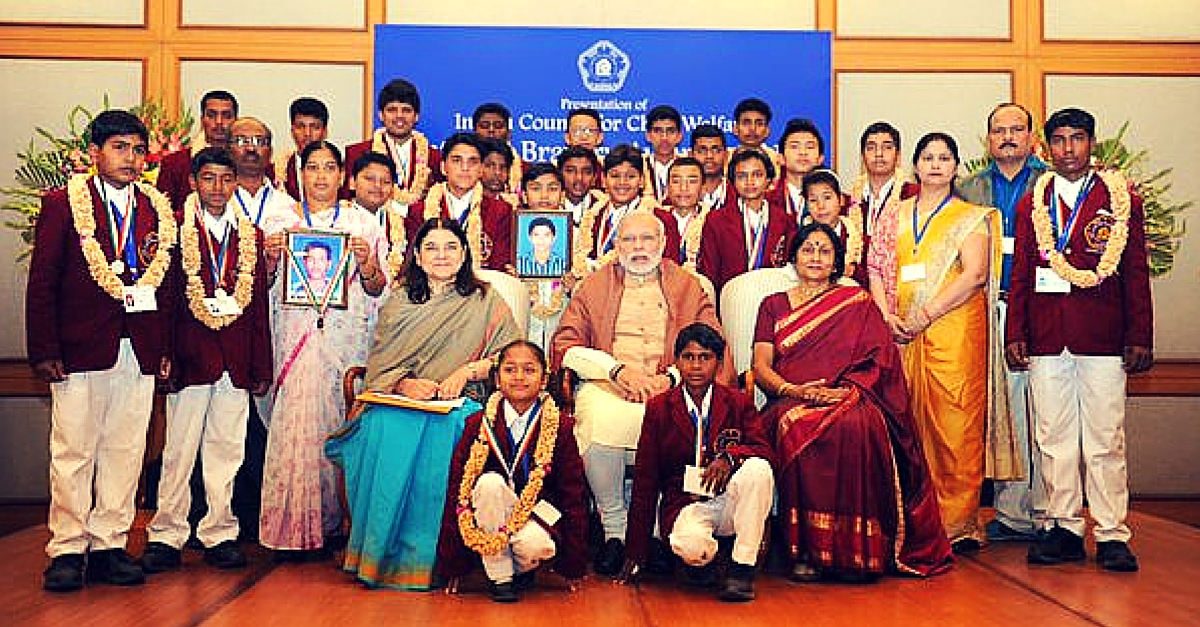 They saved their friends, parents, and neighbours from drowning, electrocution, thieves and a lot more – these 25 children, who were honoured with the National Bravery Award this year, displayed immense courage and risked their lives to protect their loved ones. Here are their awesome stories.

New Delhi witnessed the gathering of some of India’s bravest children on January 24, when Prime Minister Narendra Modi presented the National Bravery Awards to them. From a 16-year-old who fought off a tiger, to a 13-year-old who lost his life while trying to save his friend from drowning – these three girls and 22 boys showed incredible bravery in the face of some very dangerous situations.

“For the award winners, this act of bravery should not become an end in itself. Life must continue to evolve and the children should continue to develop their careers and continue to serve society to the best of their abilities,” the Prime Minister told them during the event.

The National Bravery Award scheme, initiated by the Indian Council for Child Welfare (ICCW), was started with the aim of awarding children in the age group of 6-18 years, who display outstanding bravery and inspire other children with their actions. The awards consist of five categories including the Bharat Award, Sanjay Chopra Award, Geeta Chopra Award, Bapu Gaidhani Award and the General National Bravery Awards. The awardees receive a medal, a certificate, and a cash prize. Bharat Award winners get a gold medal, while the others receive silver. As a part of ICCW’s sponsorship program under the Indira Gandhi scholarship scheme, each child is also receives the financial assistance to complete his or her schooling.

Here are the astounding stories of this year’s winners.

8-year-old Shivampet Ruchitha became the youngest person to receive the award this year. On July 24, 2014, Ruchita saved two of her school mates when a train hit their school bus. She noticed that their bus had stopped on a railway track and a train was coming towards them. Showing extraordinary presence of mind, she pushed two students out of the window and jumped off the bus herself too. Unfortunately, she could not save her younger sister who was sitting in the front row. Her younger brother sustained severe injuries, but he has recovered now. 16 students, the driver, and the conductor lost their lives in that accident. She was honoured with the Geeta Chopra award.

“It feels good to have the limelight and get an award from the Prime Minister. But I wish I was able to save my sister, too, as we all miss her,” she told The Indian Express.

In July 2014, a tiger entered 16-year-old Arjun Singh’s house in Uttarakhand. He showed extreme courage and fought it off, saving his mother’s life who had fainted as soon as the tiger entered. Arjun went into a room and picked up a sickle to fight the tiger. As it was too small to hit from a distance, Arjun grabbed a stick and waved it towards the tiger. He did not stop until the villagers reached there and the animal ran away on seeing the crowd. Arjun received the Sanjay Chopra award.

Shivansh Singh, a 14-year-old medal-winning swimmer from Faizabad, was posthumously honoured with the prestigious Bharat Award. He lost his life while trying to save his friend from drowning in the Saryu River.

“I wish he was here. Seeing all these boys and girls enjoy their moment of glory, I wish my son could have been part of this,” his mother, Neelam Singh, told The Telegraph.

Gaurav was only 15 when he lost his life while rescuing four of his friends from drowning in the Ambazari lake. He was a good swimmer and had gone to the lake one afternoon in June 2014. While playing in the water, his friends suddenly started drowning. According to the police, Gaurav swam for 20 minutes and rescued them all. But while trying to pull out the last boy, he hit his head on a submerged stone and drowned. He received the Bharat Award.

12-year-old Aromal is one of the six winners from Kerala. He saved two women from drowning in a 14-feet pond and was honoured with the Bapu Gaidhani Award.

This 13-year-old received the Bapu Gaidhani Award for saving a boy who accidentally fell into a well.

On January 2, 2015, Ramdinthara saved two boys who were stuck on a transformer fence. The 15-year-old pulled the boys out with his bare hands and took them to the hospital. Son of a tea-seller, Ramdinthara was walking past the transformer when he saw that two boys were struggling to free themselves after falling on the fence. He overcame his fear in just a few seconds and grabbed their hair to pull them up. He received the Bapu Gaidhani Award.

Abinash Mishra, 12, saw his friend drowning in Kushabhadra River. Without thinking twice, he just jumped into the river and swam to the shore after saving his friend. He is one of the recipients of the General National Bravery Award.

13-year-old Chongtham Kuber Meitei became a local hero after he jumped into a 10-feet deep well to save a girl from drowning. He was awarded with the General National Bravery Award.

“I won’t lie, I was really scared. But I had to jump into the well to get to her. She would have drowned,” he told The Telegraph.

14-year-old Muhammad Shamnad showed outstanding courage when he risked his life to save a little girl from drowning in a pond. He received the General National Bravery Award.

14-year-old Mohit saved his 10-year-old neighbour from drowning in Banganga Lake last year. When Krishna Pashtye slipped into the lake, Mohit was the only one of the hundreds of onlookers who had the courage to dive into the lake and save her. He was honoured with General National Bravery Award.

“I knew how to swim and so jumped in confidently. I saw the girl’s leg had stuck in mud in a ditch. I tried to get her leg out and managed to pull her out. When we came out, others rushed and helped us,” said Mohit, an orphan who lives with his paternal aunt.

15-year-old Abhijith was honoured with the General National Bravery Award for saving his friend from drowning in a 25 feet deep pond.

This 15-year-old saved his mother from electrocution. His mother came in contact with a live electric wire at their residence in Agapura when she was washing the floor. Sai Krishna was quick to think on his feet and he instantly rushed forward to turn off the mains supply while making sure that he did not step into the water. He was honoured with the General National Bravery Award.

On April 4, 2015, Dishant Mehndiratta was at his home in Panchkula, with his mother and younger brother. His father had just left for work when a stranger knocked at the door asking for him. The family invited him in and Dishant’s mother, Archana, called her husband to inform about the visitor. His father couldn’t recognise the man and asked him to come later. This was when the stranger asked if he could use the toilet. And while Archana was leading the way to show him the bathroom, he suddenly took out a knife and put it on her neck. He started threatening the children, asking them to bring out all the cash and valuables. Dishant made a quick plan and fell down on the man’s feet pretending to plead with him. And after a few seconds, he suddenly stood up, grabbed the knife from his hand, and threw it away. The family raised an alarm and got him arrested. Dishant received the General National Bravery Award for this courageous act.

When a man snatched away her father’s mobile phone, 10-year-old Joena Chakraborty started running after him without wasting a single second, and brought the phone back.

“I knew he would head for a narrow alley, so I reached there before him and caught his legs even though people were shouting that he had a knife,” she said.

Nilesh Bhil from Kothli was awarded the General National Bravery Award for saving a boy from drowning.

14-year-old Beedhovan saved a boy from electrocution and was honoured with the General National Bravery Award.

13-year-old Nithin was honoured for saving his neighbour’s family after their house caught fire in a cylinder blast.

On November 16 last year, a boat got overturned in Sarayu River. 12-year-old Bhimsen, who was present on his own boat, jumped into the water and saved 14 people from drowning.

Angelica Tynsong, 13, from Ri Bhoi district, saved her 7-month-old brother when their house caught fire on February 1, 2015. Her brother was sleeping while she was washing clothes, and their parents were not present in the house at the time of the incident.

14-year-old Anandu Dileep was going to his tuition class with his friends. They were crossing a bridge when his friend slipped and fell into the 10-feet-deep canal. Anandu jumped into the water and rescued him.

Maurice was playing on the terrace with his friend who suddenly got an electric shock. Had it not been for Maurice’s presence of mind, his friend would have lost his life. The 14-year-old picked up a cane chair and started hitting him till he was free.