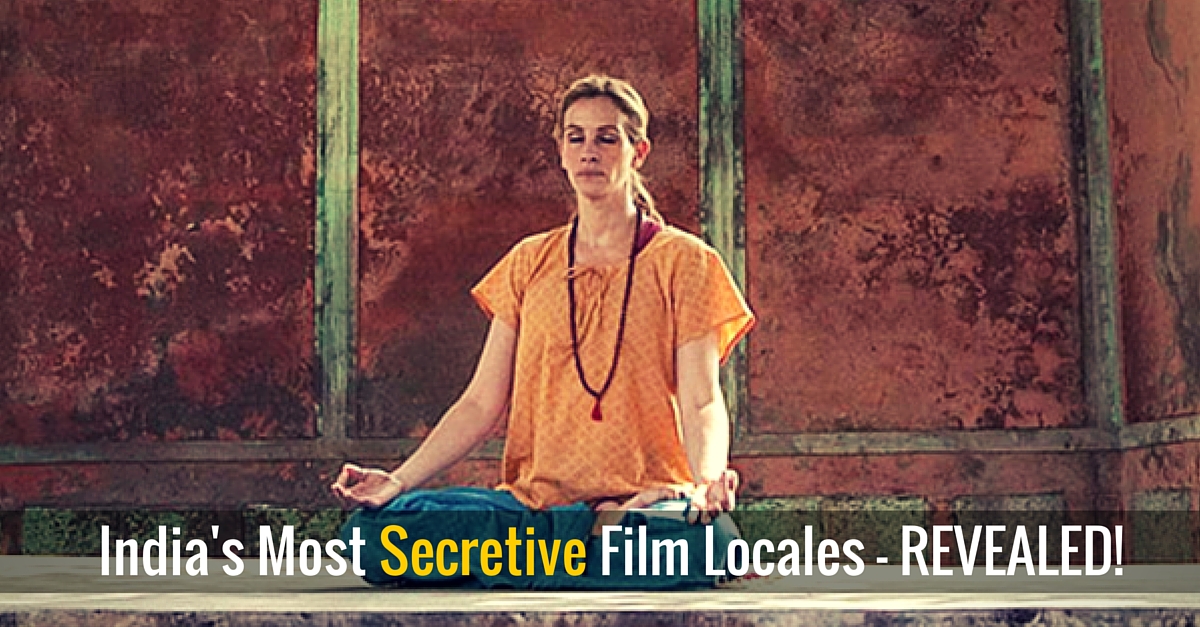 Tired of watching the same old backdrop of Switzerland in Bollywood films? Or wondering how you can ever afford to visit the exotic Iceland locales showcased in the “Gerua” song in Dilwale? Fret no more! Here’s a list of 10 beautiful and unusual locations that both Bollywood and Hollywood filmmakers found in India and you can visit too.

Movie makers are always on the hunt for something ‘different’ that will make their films stand out and set the box office cash registers ringing. This ‘something different’ could be a fantastic script, a sizzling item song, or a stunning backdrop that no other filmmaker has used before.

The hunt for locations begins almost as soon as the script is finalized. And film teams start travelling far and wide in search of the perfect spot from where Deepika Padukone and Ranbir Kapoor will watch the sunset in Yeh Jawani Hai Deewani, or the royal quarters that will be the setting of a palace intrigue against James Bond in Octopussy.

Here’s looking at 10 such film locations that may just inspire you to pack your bags and travel?

Remember Rang de Basanti, a compelling film about the state of affairs in the nation? And the majestic moonlit backdrop of a towering wall rising up from a water reservoir, atop which Aamir Khan and Sharman Joshi compete in a beer-gulp challenge? Rakeysh Omprakash Mehra captured the intimidating heights and splendour of Nahargarh Fort, not to mention the daredevil antics of youth, perfectly in that one scene.

Nahargarh Fort stands on the edge of the Aravalli Hills and affords a breathtaking view of Jaipur city. Along with Amber Fort and Jaigarh Fort, Nahargarh once formed a strong defence ring for the city. It is believed that Nahar stands for Nahar Singh Bhomia, whose spirit haunted and obstructed the construction of this fort. The spirit was finally pacified by building a temple in his memory within the precincts.

“One two three four, get on the train baby!” and head to the Dudhsagar Waterfall aboard the Chennai Express, a la SRK and Deepika Padukone in the 2014 hit movie. This breathtaking phenomenon of nature, where the mighty Mandovi river comes gushing down the rocks, is only rivaled by the man made wonder of 10 tunnels winding their way to a precarious bridge on which the train crosses the waterfall.
Dudhsagar is the fifth highest waterfall in India, at the border of Karnataka and Goa. Several trains stop at the Dudhsagar station, located about 1 km from the waterfall, from where you can trek to a spot (and even camp overnight if you wish) to take in a jaw dropping view of this milky-white wonder.

Chand Baori is an inverted pyramid stepwell situated in the village of Abhaneri near Jaipur. It was built by King Chanda of the Nikumba Dynasty over a 1000 years ago and is dedicated to Hashat Mata, Goddess of Joy and Happiness.

Rajasthan, as everyone knows, is an extremely arid region. Chand Baori was intended to conserve as much water as possible. At the bottom of the well, the air remains 5-6 degrees cooler than at the surface and Chand Baori was used as a community gathering place during the hot summer months. One side of the well has a pavilion and resting room for the royals.

This visually stunning stepwell has been used as a film location not just in Hindi films like Paheli, but also by Hollywood in The Fall and The Dark Knight Rises.

Situated 10,000 feet above sea level and surrounded by lakes, the beauty of the Tawang region in Arunachal Pradesh is unparalleled. The location of the land itself is fascinating — Tibet to the north, Sela range to the east and Bhutan towards the southwest. In this mystical setting of breathtaking valleys and misty rivers lies Shonga tser lake, situated very close to the McMohan Line of Control on the border with China. The lake itself was formed in the aftermath of the earthquake of 1950. It freezes in winter and you can walk across it.

After the filming of the thriller Koyla here in 1997, it came to be known as Madhuri Lake (after the female lead, Madhuri Dixit).

The ruins of this ancient temple made a formidable backdrop for the song Bismil, starring Tabu and Shahid Kapoor, in the 2014 film Haider. The temple is located 65 km from Srinagar in a village called Mattan in Anantnag district.  It was built in 500 A.D. and is dedicated to the sun god, Surya. The temple was built on top of a plateau from where one gets a good view of the Kashmir valley.

The Martand temple was completely destroyed on the orders of Muslim ruler Sikandar Butshikan in the early 15th century.

In a mood for some place spiritual? Head to the ashram where Julia Roberts grappled with the ‘pray’ part of her journey in the movie Eat, Pray Love.

Hari Mandir Ashram is located in the village of Pataudi, about 40 km from Gurgaon. The 25-acre campus houses an impressive temple, a school for 500 students, dormitories for men and women, an old-age home, and a clinic.

7. The Bazaars of Jaipur

If you’ve never been shopping in Jaipur, you’re missing out not only on same great bargains on colourful dupattas, bangles, shawls and trinkets, you’re also depriving yourself of soaking in the ambience of some authentic Indian bazaars. Head to the old bazaars near the walled city — Johari Bazaar (for jewellery), Chandpol Bazaar (for spectacular artwork in marble), Kishanpol Bazaar (for textiles and old furniture), and Sireh Dori Bazaar.

And go watch Dame Judi Dench bargain for a shawl in one of the bylanes of Jaipur in Best Exotic Marigold Hotel!

This boutique hotel, set within 7 acres of a lush green rainforest, is a favourite with director Mani Ratnam who filmed both Guru and Raavan around the property. Most rooms have a great view of the spectacular Athirapally falls, the setting for Aishwarya Rai dancing to ‘Barso Re.’

Combine your love of cricket with the thrill of movies and visit Pataudi Palace in Haryana, home to the late batting legend Nawab Mansoor Ali Khan Pataudi. His wife Sharmila Tagore, and children Saif and Soha Ali Khan, still take time off from their shooting schedules in Mumbai to come relax here from time to time.

The magnificent desert of Kutch, shimmering in a sea of white salt, is like no other place on earth. Glowing like a diamond by moonlight and bathed in divine sunlight by day, this backdrop is still being explored by Bollywood filmmakers.