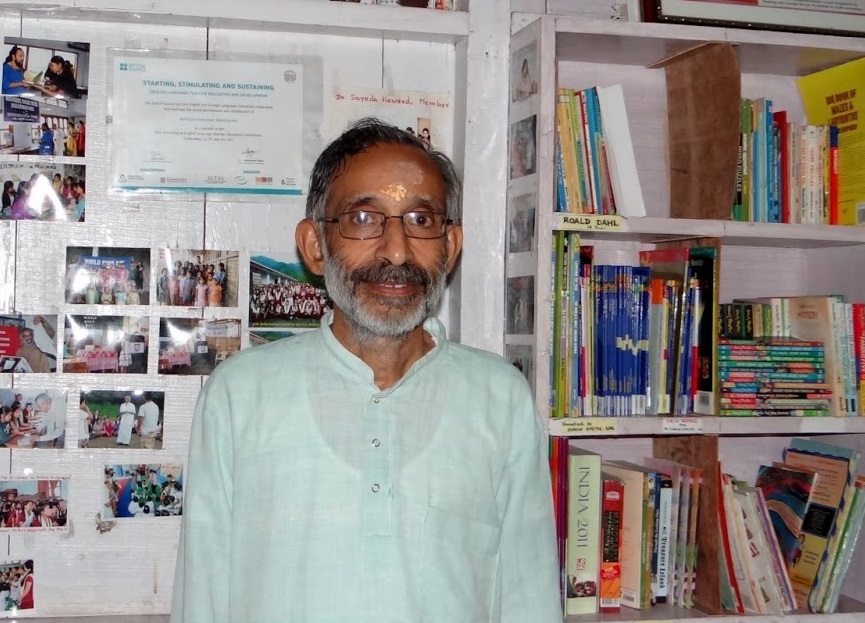 Those of us who live in urban environments can seldom understand the impact of an abstract concept like education. It is another matter that education itself may mean completely different things to different people. However, the ability to read, write, enjoy, and be inspired by ideas transmitted across time and space on a printed page is an abstraction whose power can only be understood by its absence, something that only distance can provide a proper perspective to.

But one must wonder at the drive that can inspire an individual to single-handedly promote reading habits in the hills of Arunachal Pradesh. Shri Sathyanarayan Mundayoor—Sathyanarayanji to adults and Uncle Moosa to the young—has spent 32 years in the North East part of India influencing the education and reading movements at various levels. In 1979, he quit a government job in the income tax department to find a way of life with more meaning than money. A chance advertisement led him to apply for a position with the Vivekananda Kendra Vidyalaya school movement that was then starting to spread its roots in the north-east. He worked as the education officer for the VKV schools till 1996, where he influenced many young people with his ideas; testimonies are not hard to find for him, practically everyone in any VKV school remembers the impact he made on them. The VKV schools themselves are an outstanding monument to education, and currently 34 VKV schools in Arunachal Pradesh continue to illumine the lives of many young students who would otherwise not be able to even study.

Meanwhile, fed up with the unimaginative teaching methods that haunt our school system, Uncle Moosa again decided to branch out from the confines of formal education. Several years of experimentation saw him dabble with things as diverse as a one year program in non-formal education to the cultivation of medicinal plants. He felt, however, the need to stimulate the reading habits of children and allow them to discover the power of imagination. The answer to this call took the form of book exhibitions; he would haul books in trunks to far flung villages using the abysmal state transport in an effort to promote reading among tribal children. He was planting seeds of a different kind. In 2007, in collaboration with the Association of Writers and Illustrators for Children (AWIC) and the Vivekananda Trust (of which he is a member), a gift of children’s’ books and magazines became the first library as part of the Lohit Youth Library Movement in the government town of Tezu. The library was named the Bamboosa Library after the bamboo plant. Today, 13 such libraries can be found in off-the-beaten-path places like Wakro, Chongkham, Anjaw, and Lathao.

The books in these libraries are donated by well wishers and publishing companies. Uncle Moosa is the one-man army who co-ordinates the many little details that go into getting these books. The libraries, however, are run by the “library activists” or the children who come to read; the idea is to inculcate responsibility in the children who use the library. The libraries turn into a hub of activities that include story telling, quizzes, booking readings, and enactments.

The effort to widen this circle of reading and associate activities has seen workshops on story telling and reading by various experts. Recognition for the library movement also took the library activists to New Delhi for the International Conference on Children’s Libraries in 2009, where they performed skits, poetry recitations and dances in the presence of Dr APJ Abdul Kalam and subsequently interacted with him. The impact of the library movement has attracted several eminent patrons including the Governor of Arunachal Pradesh Shri. JJ Singh, ministers, and several IAS officers.

I had the privilege of visiting the Bamboosa Library at Tezu and the Apne Library at Wakro in September 2011 and interacting with the readers and other school children through a series of theatre workshops. It was astonishing to see the confidence with which these children spoke and performed. It was a marvelous example of what the power of reading can do to a child’s self-esteem. Over a period of 3-4 days each at Wakro and Tezu we developed and performed Dr. Seuss’s powerful poem, The Lorax. The children were at their expressive best as they informed the audience of the ills of deforestation.


The libraries themselves were of great interest. There was a collection of about 1000 books each at Tezu and Wakro. The carefully chosen books covered Amar Chitra Kathas to Roald Dahl, Ruskin Bond, and Dr. Seuss. The books would surely be an education to anyone.

From my understanding of the current situation in Arunachal, these are uncertain times for the people. Student politics, drug abuse among youth, tribal conflicts with governance, and the lack of a career path for women are preventing the progress of society. At such a critical time, the library movement is doing a wonderful service to the land by planting the seeds of reading and education in the minds of the youth. Further, the work of Uncle Moosa and those of his ilk are the very examples that we in India need as our society moves towards a selfish, consumerist way of life. Such people and organizations are the good news that society needs to hear about.

Umesh PN conducted a series of theatre workshops in Tezu and Wakro in Arunchal Pradesh recently. He has been taking theatre to corporate, schools, NGOs and pretty much everywhere else for the last ten years and is deeply interested in theatre and the arts as a medium for learning.
Promotion