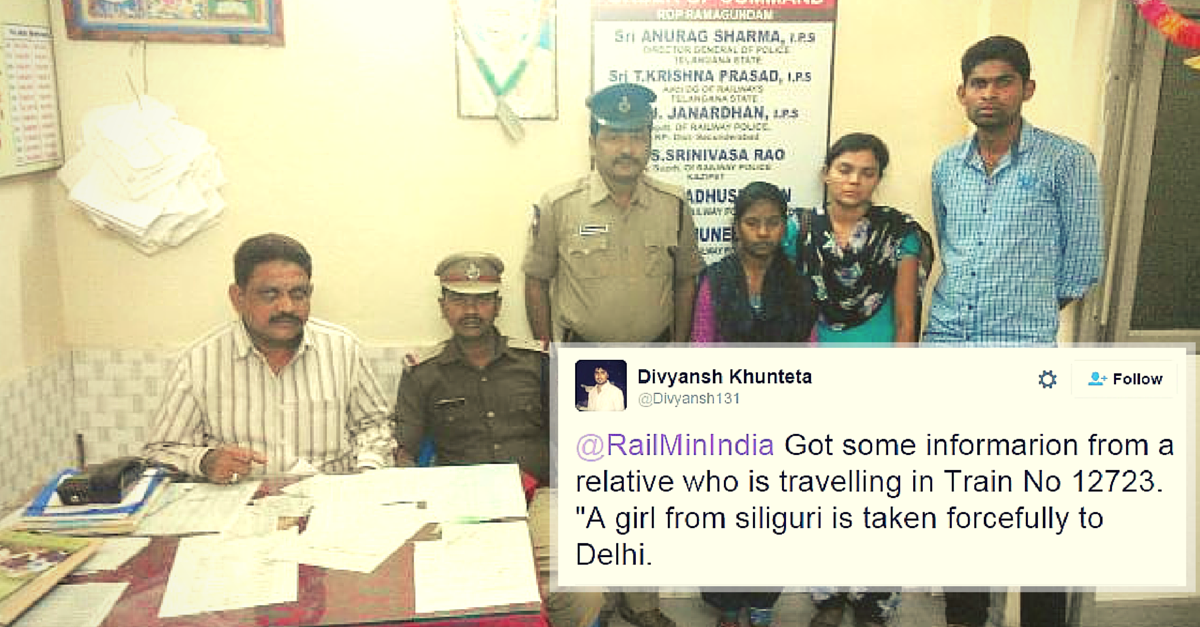 Tweets to Indian Railways have helped many passengers in the past few months. From helping with food, to providing medical assistance, railways authorities have left no stone unturned when it comes to making train journeys comfortable for travellers.

Thanks to their quick action, and the vigilance of a passenger, a young girl was rescued from the clutches of alleged human traffickers this Tuesday.

19-year-old Radha Lohar was travelling from Hyderabad to New Delhi by Telangana Express on January 5. She was accompanied by two men. While any other passenger wouldn’t have thought that there could be something fishy in this situation, Radha was actually stuck in a very difficult condition. She was being taken to Delhi against her wish by the two men travelling with her.

And as she had no way of informing anyone about it, she wrote a note to a co-passenger:

Radha wrote that she is an orphan and a student of class 10. She informed that the two men were forcibly taking her to Delhi to make her do some work. She wanted to know if the passenger could give her some information about a train to Siliguri.

Realising that the girl needed quick help, the co-passenger passed the information to his relative, Divyansh Khunteta, who immediately tweeted about it the Ministry of Railways.

@RailMinIndia Got some informarion from a relative who is travelling in Train No 12723. “A girl from siliguri is taken forcefully to Delhi.

@RailMinIndia By one girl and one boy in coach no S5(seats 5 and 3).” This is conveyed by the girl on a piece of paper to my relatives .

Without wasting any time, Ved Prakash, the Director of Information & Publicity, Railway Board, New Delhi passed on the information to Chief Public Relations Officer of South Central Railway who then alerted Sumati Shandilya, the Senior Divisional Security Commissioner of Secunderabad Division.

As soon as the train reached Ramagundam station, the Railway Protection Force (RPF) Personnel rushed to the coach, verified the information and rescued the girl. She was sent to an NGO for further investigation, and the two men were arrested.

According to a report on the Railways’ website, Radha is a resident of Alipurduar in West Bengal. She was also working with a placement agency named KT Enterprises in New Delhi and had come to Hyderabad with Kamruddin Ansari and Prem Kanti Tirkey for work. But instead of letting her go home, they were forcibly taking her back to New Delhi.