Innovations At Times Of Crisis 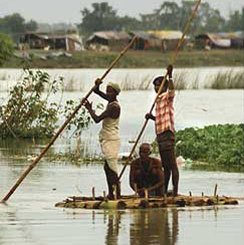 The Kosi river disaster in Bihar earlier this year caused widespread devastation. However, if we try to look for a silver lining or at least something to appreciate, we can

The Kosi river disaster in Bihar earlier this year caused widespread devastation. However, if we try to look for a silver lining or at least something to appreciate, we can talk about the ‘babus’ who tried to bring in new technologies and innovations to help the victims pick up the pieces of their lives, and start again. Be it toilets made of bamboo or software for tracking missing persons, government officials are playing an important role in rebuilding the community.

Bamboo is available in plenty, and the people are being encouraged to use it to build their homes as well as furniture for use and sale. The “bamboo economy” plan is being drawn by the Bihar Government to ensure that the workers are guaranteed an income and training programs to help generate employment. Women’s self help groups are also being set up to promote the bamboo revolution. Alok Kumar Gupta writes in Down to Earth:

Officers claim that a bamboo revolution is on the cards. Now that floodwaters are receding, H C Sirohi, commissioner of Saharsa division and in charge of flood relief operations, has launched a training programme to make bamboo furniture. “At first all we saw were resigned faces of thousands of flood victims grieving the death of their dear ones. We then decided to use local resources to help them rebuild their lives. Bamboo seemed the obvious answer as it grows here in plenty and we believe it will usher in employment opportunities,” Sirohi said.

The Bihar government has finalized a blueprint to create a bamboo economy in the flood-hit northern and central Bihar. Talks with the National Bamboo Mission have begun for setting up women’s self-help groups. National Bamboo Mission is a government body created by the Union Ministry of Agriculture to promote the bamboo sector. The government has assured flood victims that it would purchase their bamboo furniture for schools and government offices, replacing wooden benches. It also plans to sell the furniture in other states.

Besides relief work, the Government’s other priority has been tracking missing persons. In the aftermath of the calamity, thousands of people have been displaced from their homes, and it is an enormous task to locate these people. The government had to develop new software with the help of IT companies, since the IBM software previously used in Sri Lanka after the 2004 tsunami worked on details like passport number and driving license, which most people in the flood-hit districts did not possess.

This spurred Jeevika to develop a software with the help of IT majors. This one is based on data such as the name of the missing person, his village, block and district. Called the Missing Person Tracking System (MPTS), this software is being used to track down lost relatives.

“Data collected by Jeevika and the officials from flood-hit districts is entered into the software. We have ensured that names of the district, block and village are automatically corrected even if wrong spellings are keyed. Over a dozen families have been re-united with their missing members,” added Choudhary.

The state has also been doing a commendable job of monitoring relief camps and plugging in any gaps. “Mobile inspectors” with GPRS-enabled phones have been deployed by the State Disaster Management Cell to travel incognito to these camps and take photographs of their conditions.

The most innovative invention, however, came from the flood victims themselves. Stranded people created makeshift boats from six pieces of thick banana stems tied together using a local patua fibre. Such boats could stay afloat for a while since the banana stems absorb water and expand, thus tightening the joints held by the ropes. This is so original and useful that the army and navy men present in the rescue operations have recommended its study for possible uses. We would like to salute the Indian spirit, which can come up with amazing inventions even in the middle of a storm.

Read the complete article here.
Image Courtesy: Down to Earth