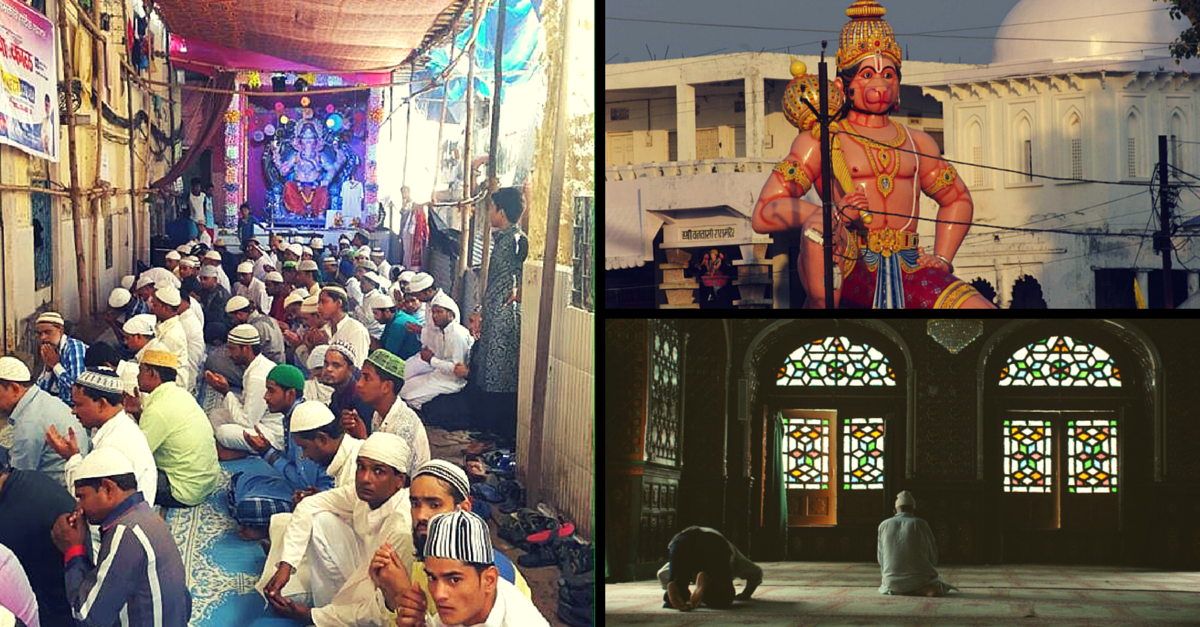 Is there communal disharmony in our country today? If yes, are the instances rare or common? Are Muslims, Sikhs, Hindus and Christians capable of living in peace together like they have done for centuries in India? Or will they be divided by mischievous and malignant elements in society, much like the British divided and ruled India for years?

We had to look around very little in order to find beautiful examples of religious harmony in India today. Where people from different faiths come together in the spirit of humanity, celebrating India’s diversity and rich heritage of tolerance. Here are 10 examples of friendship, love and selflessness by people of different allegiances towards those from other backgrounds than theirs. They are bound to restore your faith in humanity and your country.

1. When Hindus and Muslims Shared Some Moments of Grief Together

Hindu and Muslim residents of Sendhwa town in Barwani district of Madhya Pradesh came together to cremate 75-old-year Sitaram who had no family member left behind. People from both the communities attended his funeral ceremony and cremated him with full honour.

2. When Muslims Paid Respect to a Hindu Martyr

A mosque in the Malappuram city of Kerala continues with the tradition of celebrating an 18th century Hindu martyr even today. His name was Kunhelu and he is a respected legendary figure. It is believed that Kunhelu lost his life along with 43 Muslim warriors in a battle, when the then ruler of Kozhikode attacked Malabar, about 290 years ago. Kunhelu belonged to the goldsmith community and he joined his Muslim friends in the war which started over an issue of tax collection. Every year, a group of Muslims gather at the Valiyangadi Jumma masjid to pay homage to the martyr who is buried at the mosque. The descendants of Kunhelu are also invited during prayer meetings.

3. When Hindus and Sikhs Helped Repair a Mosque

People from the Sikh and Hindu communities helped repair an old mosque in Nathowal village near Ludhiana. They also took care of more than 65 percent of the repair expenses. The project cost was around Rs. 25 lakh, of which Rs. 15 lakh was contributed by Sikhs and Hindus. The three communities live in peace in this village. Muslims and Hindus contribute to the gurudwara work as well. A resident of the village informed The Times of India that they celebrate all festivals like Diwali, Dusshera, Rakhi, Eid, and Gurupurab together.

4. When Hindus Helped a Muslim Couple Deliver a Baby

27-year-old Ilayaz Shaikh was taking his pregnant wife to the hospital in a taxi in Mumbai. But Noor Jahan went into labour midway and, to the couple’s shock, the cab driver asked them to leave as he did not want her to deliver the baby in his car. Spotting a Ganesha temple at a distance, the couple walked towards it and were helped by a group of women who created a makeshift delivery room in the temple. They helped in the successful delivery of a baby boy. To commemorate this gesture and the fateful day, Noor Jahan named her son Ganesh.

5. When a Muslim Man Performed His Friend’s Last Rites Following All Hindu Rituals

When Santosh Singh lost his life to a terminal disease, his friend Razzak Khan Tikari, a Muslim, performed his last rites following all Hindu rituals. He set a very touching example of how religion can never be a barrier when it comes to true friendship. Razzak is a resident of Chhattisgarh, and he had been friends with Santosh for many years. Santosh and his family were not very well off. After Santosh’s death, Razzak also helped his friend’s wife financially.

6. When Ganesh Chaturthi and Bakra-Eid Were Celebrated in the Same Pandal

During the celebration of Bakra-Eid this year, many Muslim devotees in Mumbai were seen performing their prayers inside a Ganpati pandal. How did this happen? When members of the Seva Sangh Ganeshotsav Mandal in Colaba saw that the Madrassa Rahamatiya Talimul Quran mosque could not accommodate all the devotees who had turned up to offer their prayers, they invited them to the pandal meant for Ganesha Chaturthi celebration so they could pray in peace.

7. Beyond Caste and Religion, the Inmates of a Jail Fast for Ramzan Together

To show solidarity with their Muslim friends, all inmates of Ludhiana jail decided to fast during Ramzan. Muslim inmates in the jail celebrated Diwali and Gurupurab with the Hindu and Sikh inmates in the same spirit.

8. When a Muslim Decided to translate the Hanuman Chalisa into Urdu

Abid Alvi, a Muslim youth, has translated the Hindu prayer, Hanuman Chalisa, into Urdu with the view that it will unite the two communities as they will understand each other’s culture and beliefs better. A resident of Jaunpur, Uttar Pradesh, Abid took three months to complete the translation. He wishes that Urdu books should be converted to Hindi and vice versa.

9. And a Hindu Man Decided to Write Prophet Muhammad’s Biography – in Marwari

Rajeev Sharma read about Prophet Muhammad and was impressed by his teachings. So he wrote a book about him in Marwari, a regional language of Rajasthan. The 112-page-long book called “Paigambar ro Paigaam” talks about the life of Prophet Muhammad. The book is available for free on Sharma’s e-library, which has a collection of over 300 books. It can be downloaded here.

10. And Finally, This Muslim Performer Who Sings Kirtans

Shaikh Riyazoddin Abdul Gani, better known as ‘Rajubaba Kirtankar’, is seen singing Meera Bhajans while balancing a water-filled pot on his head. This 73-year-old from Beed city in Maharashtra was fascinated by Hinduism when he was a child and used to sit outside temples to learn kirtans. Eventually he was accepted by Hindus in the temple, and started singing there. On realising that people were falling asleep during kirtans, he decided to give them a twist with a dancing-singing routine. He used to sing while bringing water from the river, and that gave him the idea of adding a pot to the performance. A few months back he also gave a performance at the Spic Macay festival of IIT-Bombay.

Heard of more such stories in your neighbourhood? Tell us about them!