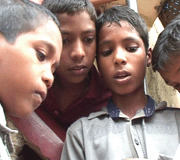 On Children’s Day, what better gift can we give them than the gift of a voice and representation? This is what about 65,000 children enjoy in 4 districts in Karnataka at the Makkala (children) Panchayats. Aged between 6 and 18, these young leaders are being groomed to understand their rights and participate in the democratic process of the country.

Initiated in 1995 by Concerned for Working Children (CWC), an NGO, in collaboration with the Ministry of Rural Development and Panchayati Raj, Government of Karnataka, the Makkala Panchayats allow children to make informed decisions on issues that concern them. Malathi Belur reports in Deccan Herald:

As part of Makkala Panchayat, the voters elect candidates aged between 12 and 16, who in turn hold Grama Sabhas and participate in Gram Panchayat meetings.

If you thought these little administrators could be sidestepped, think again. For, they are armed with information, data from research, surveys and an agenda chalked out at the prior meeting of Makkala Gram Sabhas.

Apart from the Namma Sabha and Bhim Sangha, the Makkala Panchayat gets a backing from the Task Force which comprises government functionaries, elected representatives, local NGOs and other organisations.

Not only are these children raising and solving their concerns, they are also bringing about a world of change in the community and its development. They have successfully campaigned for various issues like facilities for the disabled, proper distribution of ration cards to the poor, basic amenities in schools, etc. With their fun-filled and lively way of working, they have infused new life and vitality in the proceedings of the sabhas and panchayats.

Wondering how the elections are held?

Elections held to the Panchayats are better than those that are held to Gram Panchayats due to their non-partisan nature, compulsory voting and reservations for working children, students, school dropouts, migrant children, the disabled and girls. However, each Panchayat has devised its own system based on local needs. For example, while in Kundapur girls are given 65 per cent reservation, in Bellary, seat sharing between girls and boys is 50:50.

Elections are held in schools by the election committee with the help of head masters, teachers and anganwadi workers. In one instance, when a member of the Panchayat failed to attend meetings, he was sought an explanation. On finding the reason invalid, he was recalled and by-election was held to the post. Of course, earnestness of these kids would make any adult feel shame for not being able to recall the corrupt ministers in our political set-up.

This unique initiative by the CWC and Government of Karnataka is a wonderful model to make responsible and dedicated citizens out of the children of today, and a great training ground for future leaders of the nation. It also stems the tendency to complain about inadequacies in the system, and instead, be a part of the system and work to improve it from within. The Makkala Panchayats could surely serve as an example for the role played by an ideal democracy to the rest of the country, as to the rest of the world, and should be given due recognition and encouragement. There are a lot of lessons to be learnt here.