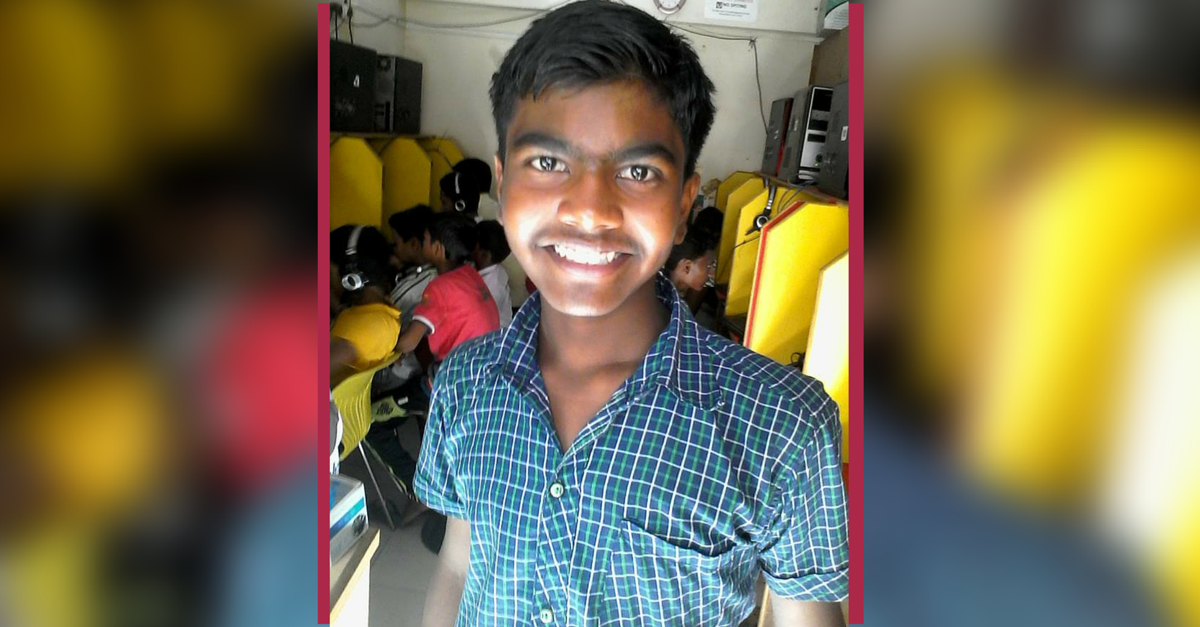 Children like 15-year-old Anuj Nirmal are our hope for tomorrow – the hope that one day, every child in our country will be able to nurture a strong dream of his/her own, and will have the opportunities and determination to achieve it.

15-year-old Anuj Nirmal’s interests range from writing blogs, building robots, and researching on how to create educational apps, to studying human psychology and predicting how people would behave in different circumstances. His personal achievements so far include winning an inter-school parliamentary debate competition, and attaining the second place in a city-wide Kho-Kho competition organized by the BMC, naming but a mere few.

Recently, he was also seen in the role of a student facilitator at a Teach For All conference in which leaders like Wendy Kopp (Founder – Teach For America) and State Senator of Colorado, Mike Johnston had also participated.

A few years ago, Anuj and his family moved from a small village near Allahabad, to a one room set-up in Prem Nagar Chawl, located in the bustling suburbs of Goregaon, Mumbai, to start life afresh. He is the youngest of three children in the family and his parents iron clothes for a living. However, such tough circumstances never deterred him from achieving his dreams.

Anuj is not only a brilliant student, but he also makes it a point to find the time to pursue his passion for technology and to learn more about the field.

“I was 7 years old when sci-fi and superhero movies began to inspire me. I loved watching how superheroes were able to help the world using technology!” he says with a grin.

It was then that he started maintaining a journal of all the ideas that would strike him, and also began to experiment on any object that he found around him.

“I dismantled a DVD player I found somewhere once and used its parts to create a locomotive engine for a small prototype crane lift. My experimenting actually caused a power failure inside the house once which made my parents ban the activity at home altogether!”

In the absence of a computer at home, Anuj used to save up money to visit an internet café to update his blog. The owner of café discovered his ability to type fast and offered him a job.

“I got to use his computers for free and paid my school fees with the salary he gave me. Now I work at the café in the evenings on weekdays and on Sundays. There I teach Microsoft Office and undertake admin duties along with learning the basics of coding and java script myself.”

Anuj draws inspiration from his parents and teachers alike.

“Studying in Siddharth Nagar municipal school, I’ve been fortunate to have Teach For India Fellows as my teachers since Grade 3 as they’ve always guided me and supported my ideas. I recently developed an interest in hacking and showed my science teacher and TFI Fellow, Sravanti Didi, how easy it was to hack into her computer. She wisely made me aware about cyber law and ethical hacking and recommended that I look up Ankit Fadia who wrote a book on ethical hacking in 2001 when he was just 15. Another Teach For India fellow, Apoorva Didi, taught us how to debate and construct arguments. I’ve always been a shy public speaker, but Apoorva Didi made me challenge my fear by taking us to the mall and asking us to debate in front of all the people there!”

For a 15-year-old, Anuj has perfected the art of managing his time prudently. He wakes up at 5 am every day, studies for an hour before reaching school at 7 am. Being the head boy of his school, he starts by making sure that everything is clean and ends the day by leading other students to move out of school in an orderly fashion. Since the school does not have a Hindi or Marathi teacher, Anuj attends tuition classes from 2 – 3:30 pm to address his weakness in language studies and then proceeds for Just For Kicks football practice (a TFI-led annual inter-school competition) at 5 pm before heading to the internet café at 7 pm where he works till 9.30 pm.

He has also been selected by Teach for India to be in the Planning Committee for the next phase of the organization.

“I feel so happy to be able to give my views and ideas. Teachers are usually aware of their classrooms to only a certain extent – when I interact with my classmates during recess and outside school, I get to see another side to them. I hope I can make as much of a contribution to the next phase of Teach For India as their Fellows have made to my life and thinking over the last 5 years” he says, solemnly, with heart-warming humility and touching honesty.

Anuj dreams to be the youngest founder of a technology company called Anuj’s Products that would build various tech gadgets. And he wishes to use the money that he makes from this company to build hospitals and schools for the poor.

“God has given us one life and we should use it to the fullest. I feel like crying when I look at beggars and handicapped people on the street and wonder why nobody is even trying to train them to talk on the phone so that they can work in a BPO, for example? After all, they can still use their mouth to speak! I want to make technology that can help such people so that nobody is ever left helpless. I also see boys in my area who sit on their bikes all day – smoking and picking up fights. If they are so interested in fighting, they should do something useful and join the military!”

Children like Anuj Nirmal give us hope that one day every child in our country would be able to nurture a strong dream of his/her own.