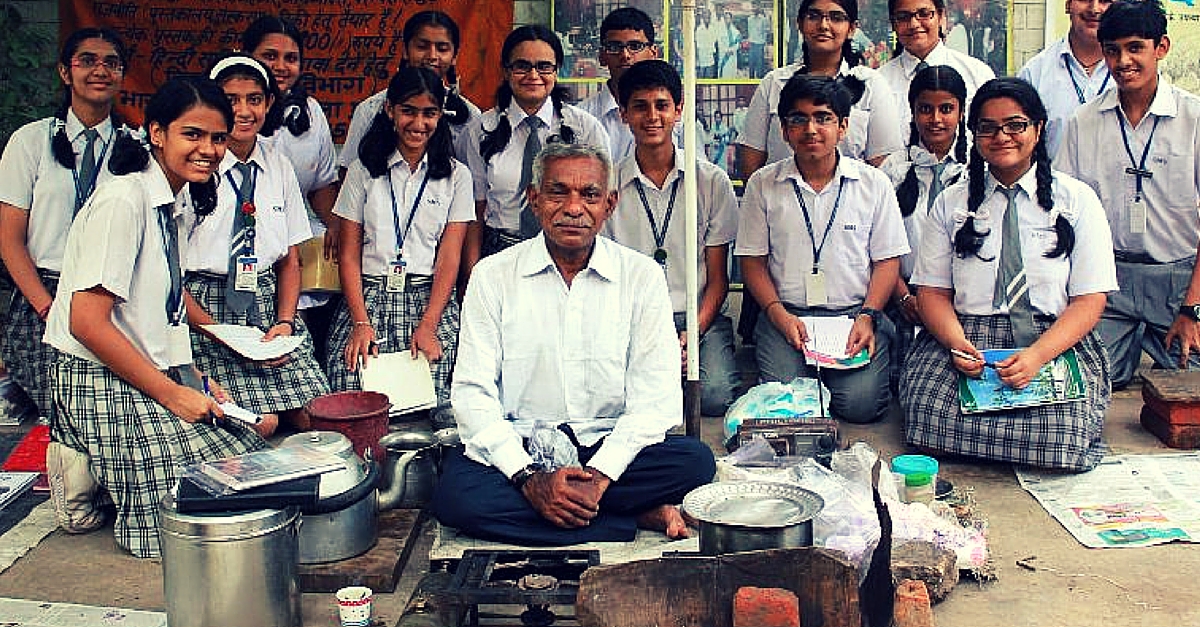 No one would guess looking at this chaiwallah in his makeshift roadside shop — the one with an old tin kettle and crusty chai glasses — that he inhabits another world of reading and writing as well. Laxman Rao has written 24 novels, published 12, and is now pursuing a Master’s degree.

People in Delhi who like tea and good stories should pay a visit to Laxman Rao. The 63-year-old man has been writing books since he was a teenager. He has self-published some of those books and they are on sale at his roadside chai shop near ITO in Delhi, and are also available on Flipkart, Amazon and Kindle.

Born in Talegaon Dashasar village of Maharashtra, Laxman was inspired by the writings of Gulshan Nanda to take up writing himself.

He used to read Nanda’s novels as a 15-year-old. “I used to think I will become Gulshan Nanda one day,” he says.

There were no schools in Laxman’s village, so he had gone to live in Amravati. However, due to financial problems in his family, he also had to work as a domestic help for three years, and at a spinning mill for five years, while continuing his education.

It was an incident at school that first upset and moved him, and then inspired him to write. One of his schoolmates, Ramdas, a boy from his village, drowned in a river and lost his life. Ramdas was known for being a rebellious student before one teacher helped him change his life and turned him into a favourite of everyone at school. The story of Ramdas became the first book written by Laxman.

Knowing that Delhi is the place where many publishing houses are located, Laxman wanted to move there and take up writing in a more serious way. After finishing school till Class 10 and working as a farmer for some time, Laxman left his village with only Rs. 40 given by his father. The journey to the capital city itself was not an easy one. He could only reach Bhopal before all his money was used up. So he had to work as a labourer at a construction site for three months.

Finally, in July 1975, he reached Delhi as a young man of 25. All he had at that time were two shirts, a 10th-grade completion certificate, and the dream of becoming a successful writer someday.

On reaching Delhi, he tried to find a job but could not get anything. He had to work as a construction site labourer and a waiter at a restaurant for two years before opening his own paan (betel leaves) shop. Later, he converted it into a tea shop and has been selling tea for the past 20 years now.

In those two years, he wrote another book called Nayi Duniya ki Nayi Kahani, based on his journey to Delhi and his determination to become a writer. But when he finally took both his books to the many publishers in the city, Laxman received nothing but rejection and ridicule. Nobody believed that the work of a tea seller could be any good. It was when one of these publishers literally asked him to “get out” that Laxman decided to publish his books himself, without any external help.

And so, in 1979, he used all his savings (Rs. 7,000) to self-publish his first novel, Nayi Duniya Ki Nayi Kahani. Being a publisher means you have to sell your book yourself too. Laxman used to do that by riding across the city on his bicycle, stopping by at libraries and schools, asking people if they would be interested in reading his work.

Today, he publishes 500 copies each of 4 different titles annually. Publishing one title costs around Rs. 25,000-30,000. He says about 100 copies are sold from the tea shop itself every month, and the rest are sold through e-commerce websites. He is also working on 2 more novels these days.

After his first book was published, people slowly began recognizing him as an author. In 1984, a senior Congress party member came to know about him after reading an article based on his life. He told the then PM of India, Indira Gandhi, about Laxman, and he was invited to meet and present his books to her. She encouraged him to continue writing. When he insisted that he wanted to write a book on her life too, she said that he should write something about her tenure instead. Hence, he wrote a play called Pradhanmantri.

“I wanted to present it to Mrs. Indira Gandhi but her unfortunate death took this opportunity from me,” he says.

In spite of being good as a writer, Laxman never gave up the urge to learn, and is continuing his education even today.

He passed the Class 12 CBSE exam at the age of 40 from Patrachar School in Delhi, and then completed his graduation through a correspondence course from Delhi University. Currently, he is pursuing MA in Hindi from IGNOU.

“I chose to write in Hindi as I wanted my books to be read all over the country. So I started reading Hindi books as much as possible. I used to visit Daryaganj’s old books’ market every Sunday to buy Hindi books,” says the writer.

Like his novel about Ramdas, all his books are based on real life incidents.

“Some boys at my stall used to talk about a girl, their classmate, who did not speak much. I asked them if I could meet her. She then became a character (and title) of one of my books — Renu,” he says.

Renu also became the book that Laxman personally presented to the former Indian president, Pratibha Patil, who was so impressed by his work that she invited him to Rashtrapati Bhavan, along with his family, on July 23, 2009.

As of now, he has no plans of closing his tea shop. “With the money I earn from my books, I have to publish more books. And the tea shop helps me run my household,” says Laxman, who lives with his wife and two sons, both of whom are pursuing higher studies.

Laxman has now stopped going around selling his books. Ramdas, the first book that he wrote, is his bestselling novel till date and is already in its 3rd edition. Over 3,000 copies of it have been sold and it has also been converted into a play.

He is currently working on his upcoming books —Barrister Gandhi, which is based on the life of Mahatma Gandhi, and DANSH, a social novel. Some of his other famous books include Narmada, Parampara Se Judi Bhartiya Rajneeti, Ahankaar, and Abhivyakti.

Laxman Rao refuses to take any funds and donations from people. Those who want to give are politely advised to buy one of his books instead.

“I am satisfied with my life, I want to move ahead. I am hopeful that my books shall earn me a lot of money someday. Then I’ll stop selling tea and engage in full time writing. That day is not too far away now,” he says confidently.

To know more about Laxman, you can write to him at laxmanrao.bskp@gmail.com and visit his Facebook page. His books can be bought on Flipkart, Amazon and Kindle.