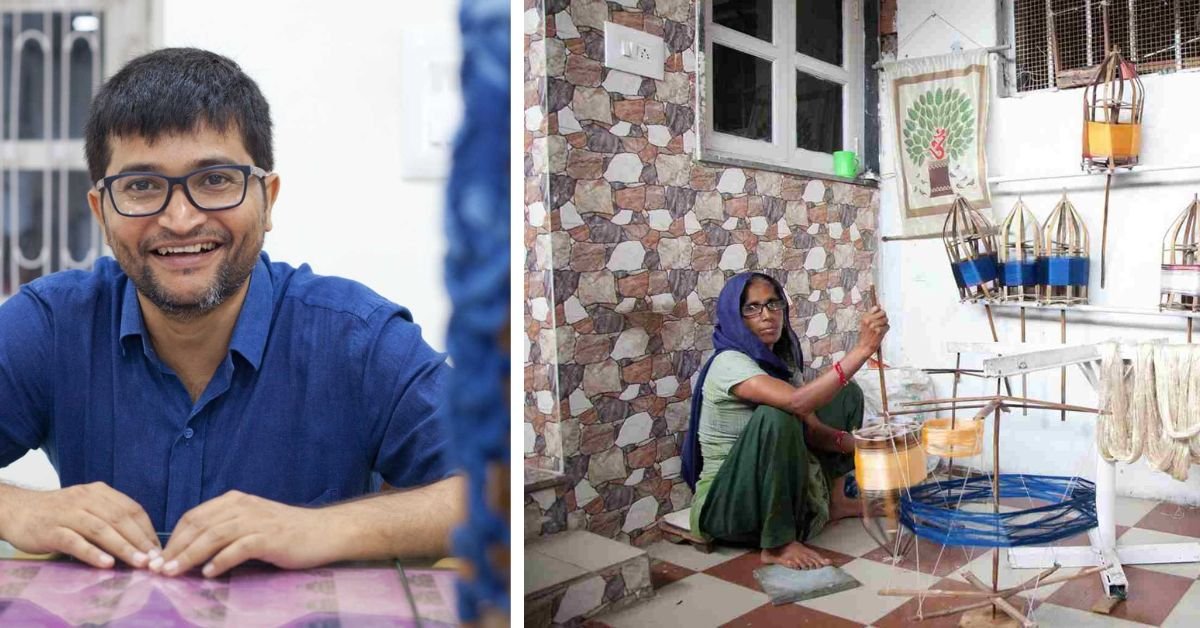 Paresh Patel of Gujarat is a third generation weaver whose family is carrying forward the ‘Ashavali brocade’ technique of weaving with the handloom set up by his grandfather.

For 70 years now, a unique love story has been spinning between the ‘Ashavali brocade’ weaving technique and the Patel family — one of Gujarat’s oldest who still engage in this form of fabric art. Today their brand ‘Royal Brocades’ has found its way to the wardrobes of famous personas the likes of Rekha and Lata Mangeshkar among others.

As Paresh Patel — a third-generation weaver of this family continues to carry forward the legacy of Ashavali weaving in the handlooms set up by his grandfather, he recounts how it was a hobby idea that sowed its beginning.

“My grandfather Somabhai Patel was a farmer in Ridrol, Gujarat. While the monsoons meant long hours and hard work in the fields, the summers came with a lot of free time. On one such day, my grandfather tried his hand at weaving at his friend’s loom,” recounts Paresh adding that Somabhai took such a liking to this craft that he wanted a loom of his own.

Since looms in those days used the jala mechanism which needed three people to operate it, Somabhai roped in two of his friends for the purpose.

“Their fabrics woven with the Ashavali brocade style soon found their way to the mainstream market,” says Paresh. “But my grandfather discovered they weren’t getting the right prices for their sales due to the number of middlemen involved in transporting the fabrics from Ridrol to Ahmedabad, where they were sold. He thought it was time to connect directly with the customers.”

This also enabled Somabhai to get a firsthand idea of what the customer was looking for. It helped him to decide the look and feel of the fabric, the colour combinations, and the final design.

What was initially a family venture with five looms, increased to 100 within the next decade because Somabhai convinced the artisans from Surat and Madhya Pradesh to shift to the looms in Gujarat with a promise to pay them well.

There is an interesting story of why the weavers were spread across these states at the time.

Through the lens of history: the tale behind the Ashavali art

The Ashavali brocade dates back to the 17th century and started as a craft in Ahmedabad, Gujarat.

“There were around 500 to 600 looms in Ashaval (the old name of Ahmedabad). The looms were famous for the picchwai (a piece of cloth that hangs from the back of an idol), kinkhab (a fabric woven with silver and gold threads), kasab borders (ancient form of embroidery), pallu (the loose end of a sari), sari, saddlecloth, floor spread, wall-hangings, yardages and canopies that the master weavers of the Hindu Khatri community would weave,” says Paresh.

These creations amassed great popularity and a bulk of them were sold in Iran, Turan, Egypt, Syria and other Middle Eastern countries. However, in 1300 AD, everything changed.

The fire in Gujarat posed a great threat to the weavers here and they began migrating to Agra, Ajmer, Delhi, Varanasi and Chennai, where they set up looms and continued the brocade work. Thus, a craft that had taken birth in Ahmedabad no longer existed in the city but was popular in other parts of India. This popularity too began to decline in 1950 as mass-market textiles began to overtake the market.

In light of this redundancy that the Ashavali brocade was seeing, Somabhai Patel’s loom came as a ray of hope.

As Paresh says, they are the “only family right now who is carrying forward the legacy and working whole-heartedly to sustain this woven heritage”. Through the years, the Patel family has remained resilient to changing patterns and popular trends and stuck to their heritage art.

A sustainable and sustaining craft

“An appetite for adventure is not uncommon in the Patel family tree”, says Paresh.

“My father had completed his civil engineering degree in 1980 and was set to take up a government job. But when he knew the family legacy would die if there was no one to continue it, he changed his plans,” says Paresh, who himself took over the business in 2014 after completing class 12.

He adds while previously the jala technique was prevalent during his grandfather’s time, his father resorted to the jacquard technique, which necessitates only two people in each loom.

Invented by a French weaver Joseph Marie Jacquard in 1804, the jacquard mechanism is an intricate form of weaving, which takes an artisan 20 days to produce a single sari.

It begins with drawing a repeatable design onto plain paper and then replicating this same design onto graph paper of a larger size. There are two kinds of threads responsible for two different patterns. The vertical lines on the graph represent the warp threads, while the horizontal ones represent the weft ones.

Holes are punched into the card paper representing warp up, while the blanks represent warp down. This punching of holes creates a series of card papers with holes and blanks, and the set of papers is then placed onto the cylinder of the loom.

Following this, the drumming and beaming of the warp threads are done, and the weaver can then begin weaving. As the weaving is done, a host of colours are spun into patterns resulting in a fabric that exudes beauty.

Paresh explains that at Royal Brocades, a range of 17 herbs is used to produce natural dyes which create the colour scheme. The raw materials include indigo, pomegranate skin, rust, lac, Himalayan burberry and walnut skins.

From Gujarat to the wardrobes of Rekha

As the “only surviving karkhana (factory) of Ashavali brocade in Gujarat”, the Patel family currently has 40 looms and 100 artisan family members that they work with.

“Our studio is open 24/7, and the artisans can work according to their mood. This creates a familial environment where no one feels forced to work. We pay them per piece. It also gives us the freedom to work as per our convenience in contrast to working according to strict deadlines as in the case of working with designers,” says Paresh.

However, he cites the one “looming” problem that they see, which is the generation gap that exists in this craft.

Lalubhai, one of the weavers says his son who is currently in class 8 does not wish to get into weaving. “He wants to study and says he wants to become something big in life. He is always on his phone, and even in the time he spends with me, he does not show much interest in weaving.”

Mohammad Akbar, another karigar (artisan) associated with the Patel family says, “When I tried passing on the skill to my children, they weren’t able to get it right. They now make boxes for the sales of the products.”

Paresh credits their B2C method of doing business as a factor that has stood them in good stead through changing times and seasons.

“People get to know our story and we feel there is a connection. It is not simply buying and selling; it is much more,” says Paresh priding himself on their unique customer base.

“In the 90s, Lata Mangeshkar would order tiranga (tricolour) saris from my father. Our designs are also worn by celebrities like Rekha, Shobha De and Anuradha Paudwal, and we have even served the royal families of Thailand,” he adds.

Paresh says Royal Brocades ships across India and has even reached foreign shores — the UAE, the US, the UK, Malaysia, and Thailand. The brand sees “an average order of 40 saris a month”.

As Paresh looks back at the legacy, he says they never aimed to be on the map when they started out.

“We live in a local remote area in Gujarat and simply continued our work, doing what we do best. The rest is because of all the love we got from people,” he says.