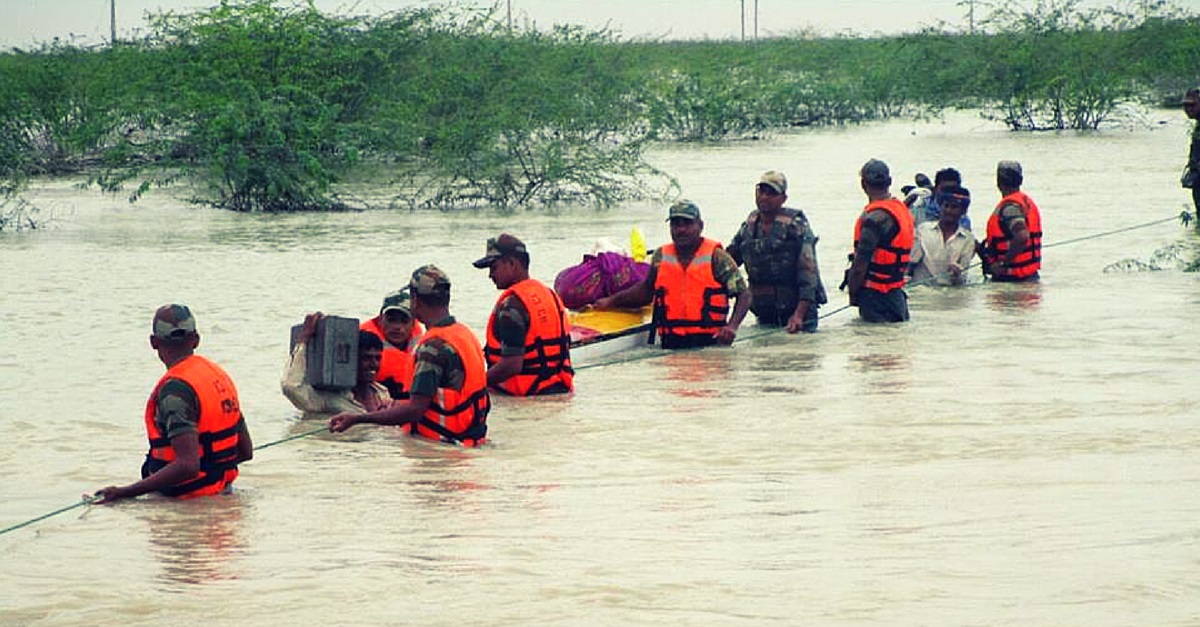 The Indian Army and Air Force are doing a great job rescuing people from the flood hit regions of Gujarat and Rajasthan. Stories of rescue and evacuation are coming in as they try and bring people to safer zones.

In the last few days, 14 districts and around 40 lakh people of Gujarat have been affected due to the recent floods as a result of heavy rainfalls in the region. The number of people affected due to the floods from July 27 to July 30 in Rajasthan, West Bengal, Gujarat and Odisha is as high as 80 lakh.

In this devastating situation, the Indian Army and Air Force have been at work continuously, rescuing affected people in the regions.

Flood affected areas of Gujarat and parts of Rajasthan have witnessed the troops of Southern Command and South Western Command involved in rescue operations. Gujarat police has also been given the task of relief and evacuation since July 31st.

In Gujarat, the relief columns are situated in Banaskantha and Bhuj, and in Dhanera and Sanchor of Rajasthan. They have been doing it all, from restoring railway tracks to risking their own lives to save people from drowning. According to Army sources, they have evacuated more than 1,000 people and have provided relief items like food, water, and medication to over 2,400 people. There are a total of 28 relief teams, 7 medical teams and 7 engineer task forces. More than 10 lakh food packets have been air dropped and distributed among victims.

Among the many stories of heroism that have come in from the state, one is from the Shervo village of Gujarat. Located 50 km north of Bhuj, the lone connecting road to Hudco village from Shervo got damaged and all communication channels and supplies were cut off. People were hence being evacuated with the help of human chains formed by the troops against the water flow. It was here that Havaldar Yousouf rescued a drowning mother and her baby, who lost balance when trying to cross a cut.

The evacuation in Gujarat began on the afternoon of July 31st, and 200 villagers including 17 infants and 32 children had to be evacuated on foot.

Another news of such selfless act also came from Shervo, where gunner Sudhir Yadav saw a dog struggling to survive in deep waters. An animal lover, Sudhir made sure that the dog was rescued. He carried it for bout 7km till the dog was at a safer place.

Thanks to the bravery of the Indian army, many people strangled in these flooded regions have been rescued.