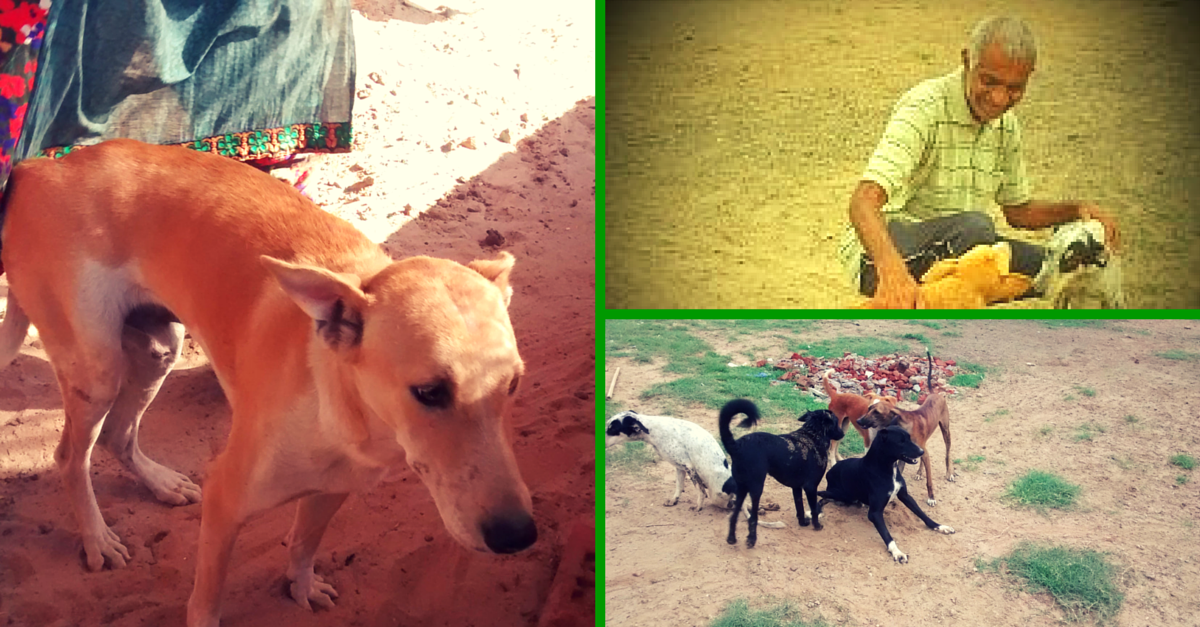 The 64-year-old, a former senior officer at the State Bank of India, talks about his disabled and wounded dogs like a father about his children—with the same love, affection, warmth, and tenderness.

He is a renowned animal rights activist, the Secretary at People for Animals (PFA), Ahmedabad chapter, and an honorary Animal Welfare Officer. But nothing defines Mahendra better that his immense, undying and undiluted love for animals. It was this love that led him to establish India’s first shelter home for dogs living with disabilities. Today, in Ahmedabad, there are 25 happy dogs living comfortably in his shelter.

It all started in 1998 when, while taking a midnight stroll, Mahendra came across a very weak puppy on the street. It seemed ill and almost all its bones were visible under its skin.

“I have come across so many animals in my life. But for some reason, this one drew all my attention that night. It was almost like I got an indication from God (about what I needed to do) in the form of that puppy,” he remembers.

Mahendra decided to feed it and for the next couple of days it became the centre of his life, until the night when he found it in a ditch, unable to move because its body had been completely paralysed. A doctor informed Mahendra that the puppy would not survive.

Since then, Mahendra started providing treatment to all wounded and sick dogs that he came across. After some time, the same doctor told Mahendra about PFA, which is India’s largest animal welfare organization, chaired by the MP, Mrs. Maneka Gandhi. Mahendra contacted her and, impressed by the work he was doing, Mrs. Gandhi asked him to start a PFA chapter in Ahmedabad.

“So I did that. I got the registration done and the Animal Welfare Board of India recognized us. Since then, there has been no looking back,” says Mahendra.

Since the last 15 years, Mahendra has been running an ambulance, which is actually his own Maruti van, and has been managing a PFA vet clinic.

With the assistance of some veterinarians and volunteers, he has conducted around 20,000 medical treatments and more than 25,000 animal birth control operations till date. He has also fought many cases against animal cruelty.

During his rounds in the ambulance, Mahendra found many paralysed and blind cats and dogs in severely wounded conditions. “I had always wanted a place where such animals could be kept together, and be provided with proper meals two times a day, water and medical treatment,” he says. Thus, in 2014, he started a shelter.

It took a long time for Mahendra to find land where the shelter could be set up. Finally, Ramesh Bhai Patel, a farmer from a village named Jundal, agreed to give his land (one bigha in area) for free. This farm is located 5 kms away from Mahendra’s place in Ahmedabad. Along with a team of four doctors and many volunteers, the shelter now has 25 dogs that were not able to walk at all when they were brought in. Today, they are slowly healing and receiving lots of healthy food, and love and care at the shelter.

Dogs that have healed with proper treatment are sent back to where they came from if the environment there is safe. However, the shelter will be home to the paralytic and blind dogs for all their lives, says Mahendra.

Lalu was the first patient at the shelter. He was injured when they brought him in, but within 10 days of physiotherapy and medicines, he was fine. He was taken back to his area, about 10 kms from the shelter.

“When we let him go from the rickshaw, it was such a pleasure to see him walk comfortably. There were other dogs there, and they seemed to be welcoming him back. It was as if they were asking him – ‘Where were you? We missed you!’” laughs Mahendra.

And Kallu was the first dog who stayed back at the shelter. He was rescued from a very dry area; he had lost two legs and was starving. Today, he is still recovering, but at the shelter, they call him Don.

“He is the king here. He makes sure that all the other dogs know that he was the first to come here, and everyone should listen to him.”

The shelter runs on the money coming from Mahendra’s own pocket. He and his wife get a monthly pension of Rs. 45,000 each. “I spend from my pension with all my heart, because this work is the mission of my life,” he says. There have been some financial crunches now and then but Mahendra is determined that no matter what challenges come their way, they are going to fight through.

Mahendra is extremely satisfied and happy with his work. “If I had not resigned from my job at the State Bank of India, I would have become the Assistant General Manager there. But I have no regrets.”

These animals are his life and he spends 24 hours with them. Back at his own home, he has six cats and one Beagle dog.

“I have no diabetes, no blood pressure, nothing,” says Mahendra cheerfully, and credits the happiness he gets from his work for his good health.

Here is wishing this selfless man and all his dogs many excellent and healthy years to come.