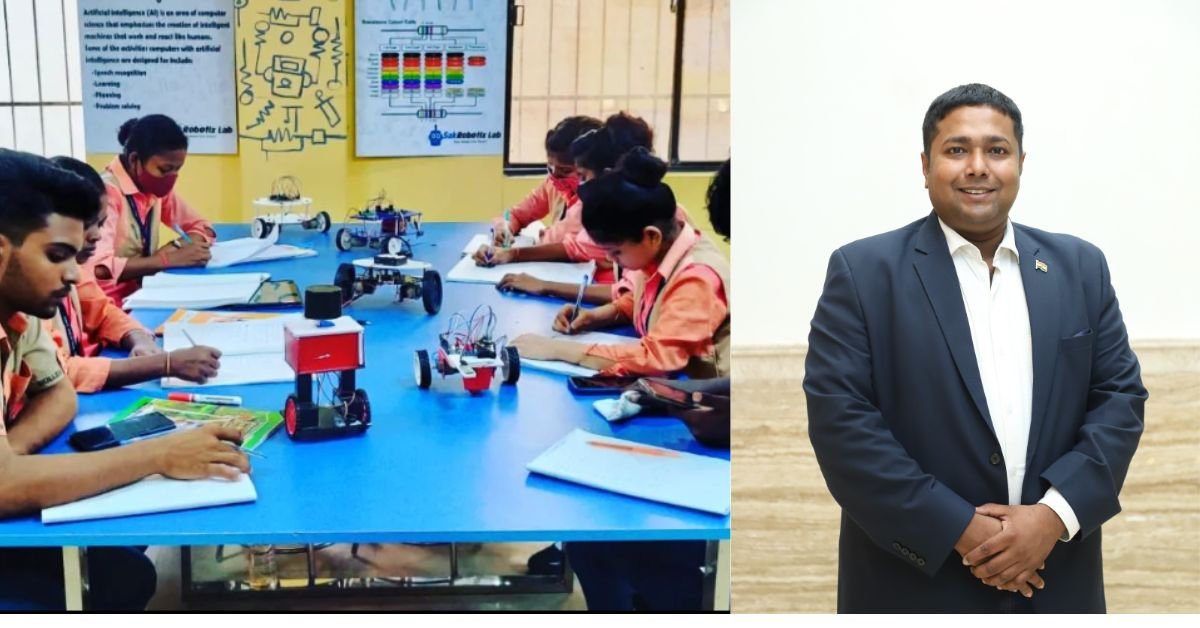 Odisha born Sakyasingha Mahapatra shares how his father’s devotion to science inspired him to embark on a mission to make robotics affordable to people in Odisha’s villages and create Sakrobotix Labs, a platform that won global recognition this year.

Growing up in a cramped but loving home in Odisha’s tribal hamlet Aunli, Sakyasingha Mahapatra was inspired by how his father Suresh honed a deep passion for science.

The headmaster of a secondary school in the village, Suresh would push his son to participate in different science exhibitions happening in and around their area. On other occasions, he would let his son accompany him on any projects he was working on.

“I was his ‘handy boy’. I would run around with cables and tools and assist him. That is how my interest in science grew more and more with time,” Sakyasingha tells The Better India.

As a teenager, the young boy also found over a decade worth of newspaper clippings from the science section of a local newspaper, which Suresh had been collecting since 1981. “On top of those papers, he would write questions or his analyses of the topics covered,” Sakyasingha recalls.

Years later, this collection of newspapers became a source for the first-ever Odia language science encyclopaedia — Vigyan Gyankosh in January 2006. Sakyasingha says that his father chose the language so the book could reach the remotest parts of the state.

Sakyasingha’s father’s passion to take science to the innermost tribal villages of Odisha served as the inspiration for his venture Sakrobotix Lab, which he launched in October 2012, he says.

A platform that provides courses in robotics for a minimal fee, Sakrobotix has so far set up 100 such labs in schools and colleges in cities like Delhi, Hyderabad, and Bhubaneswar. In October this year, it bagged the Mitchell Prize for G20 YEA Entrepreneurs.

The 37-year-old, who wants to make India the “robotics capital of the world”, says that while the inspiration came early, finding his path was riddled with challenges.

In 2002, a few weeks after his book was published, Suresh passed away, leaving Sakyasingha, then 17, desolate and in despair. Feeling like his world was crumbling and having lost his idol, he refused to give his Class 12 exams, he says.

“The rock, inspiration, and sole breadwinner of my family was gone. Facing pressure from my family, I gave the exam and somehow passed with 37 per cent marks. Although I was quite prepared, I could not do well as I was in shock and grief. We were getting Rs 1,800 as pension which made the house financially unstable,” he notes.

While engineering had been his dream all along, after his father’s death, he found himself lost. He could not choose whether he should try to bring some money into the house or follow his dream. The struggle to find his footing took Sakyasingha to various cities. Fueled by his father’s wish to see him do something big in his life, he chose to look for colleges.

“My mother and a relative promised me to give Rs 500 each when I got into a college in Jeypore in Koraput district. It was a polytechnic diploma course with a mere fee of Rs 3,500 per year,” he says.

When his mother was unable to send him money, he decided to sustain himself by working part-time. “Soon, I started taking private tuition classes to survive, along with fixing household electronics for people. Later on, I found an institute that gave computer hardware training to students. With my savings and my mother’s help I took the course and soon was fixing computers too,” he says.

After completing his diploma, he decided to go to Hyderabad and look for work. “I still felt lost, but my mind was now full of dreams. The good thing was every turn in the city had a coaching centre teaching programming languages like JAVA, Oracle etc,” he adds.

A room, a few mattresses, and a big dream

In a class where he was learning a programming language, Sakyasingha met a couple who encouraged him to not take up any job and rather get into an engineering college. And in 2006, he moved to Chennai after gaining admission to a private college.

“Their advice changed my life, I found a cheaper college in Chennai and got in. By this time, my family was doing better financially as my brother had a job as a teacher. Professors in Chennai were extremely supportive and pushed me to go to different exhibitions and to the library of IIT Madras to learn as much as I can,” he recalls.

In one such exhibition, he saw a robot for the first time. The student who had created it, he says, won the competition and a cash prize.

“I began spending hours in the library wanting to know more about robotics. When I gained enough knowledge, I would casually give lessons to my juniors in college. They would call me ‘robotics Anna’,” he says.

In 2009, after finishing his degree, he moved to Pune to work for a friend, who was paying a minimal amount for his services. Working for his friend made him realise that he wanted to apply his knowledge of robotics by teaching the subject.

He decided to go to Bhubaneswar a year later with the aim to take robotics to every village in his state and, gradually, the country.

“There was a cafe where I would spend hours brainstorming. I asked the owner if I could distribute some pamphlets to some customers advertising my robotics classes. They looked at me in disbelief but gave me a chance,” he says.

“By this point, my family was pressuring me to not get into any of that and find a job. They needed me to help them financially and getting a job was the way, definitely not entrepreneurship,” he recalls.

Regardless, he received a good response from the advertisement. So he rented a small place and bought some mattresses. This is how Sakrobotix was born.

‘I want to live on through my work’

Later, he started doing workshops in different cities like Delhi, and Bhubaneswar generating good revenue. This revenue later funded his work under the company.

“But again, there was the question, ‘What am I doing to take this to rural areas?’ In 2012, I decided to launch an online portal to provide courses in robotics, so anyone with an internet connection can easily learn. We also collaborated with colleges and schools across the country like ODM Global School, Demonstrate Multipurpose School in Bhubaneswar, and St Xavier high school in Cuttack. We teach robotics at just Rs 1,500-2,000 per year,” he says.

She says, “The children have been loving the classes. Typically in an Indian school, students don’t get to apply what they learn in classrooms. But the course of Sakrobotix is such that it gives students hands-on experience. They use their creativity to make different robots. For instance, a student recently made a robot that would blink green if you answer Muhavares (idioms) correctly. This is the kind of learning environment that the students need.”

Calling himself a “teacher primarily” and an “entrepreneur accidentally”, Sakyasingha says he started creating curriculums and robotics kits for schools and colleges.

With Sakrobotix, Sakyasingha designs specific courses for schools and colleges that contain theory as well as practical sessions. The labs that he sets up have all the necessary equipment like electronic parts for the specific project, 3D printers, tools etc.

“To take something to the rural areas, I very well know that it needs to be affordable. The kits that we make are priced mostly at Rs 5,000 as compared to the Rs 10,000 – Rs 15,000 kits. Coming from a financially weaker background, I understand that dreams can be crushed because of lack of money,” he adds.

“My vision is simple — give people from every corner, every village a chance to learn robotics. I know that one day I won’t be here, just like my father. But like his book lives on, I also want to live through my work,” Sakyasingha says.

Sakrobotix offers summer and winter online camps giving courses on robotics at affordable prices. To learn more about the courses you can visit their website or contact: +91 81143 47999.