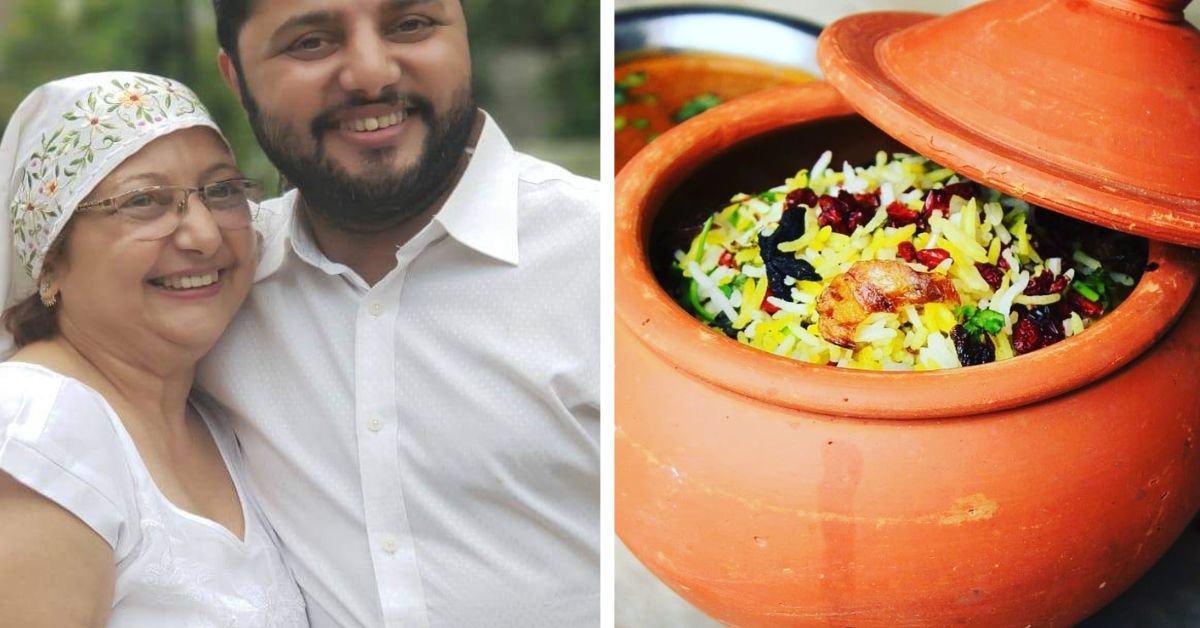 The menu at Cafe Farohar, an authentic Parsi cuisine restaurant, is a visual treat for those who make their way to the town of Udvada in Gujarat.

Run by a mother-son duo Hilla Marolia, who is now 60, and her son Shezad Marolia, the eatery has been up and running since the year 2017 and it is a tale that deserves an ear.

It all began when Hilla, who was then living in Mumbai, opened the newspaper one morning and read an advertisement.

She says it was an ad for a vacancy for the role of manager at the dharamshala in Udvada. As fate would have it, Hilla applied for the post, bagged the role, and was set to start her new position in January 2017.

When she began overseeing the activities and operations at the dharamshala, she noticed that there wasn’t much of a variety of food for the pilgrims who would come here. There was a set menu and the food lover in Hilla was awakened, wondering how she could wake up this town of Udvada with an idea.

Since she was 18, Hilla always had a fascination for cooking and spreading her love for Parsi cuisine.

In the 1980s, Hilla would cook what she knew best and distribute food through a tiffin service that she had started. Barely 18 years old at the time, she had quite a fan following in the Parsi community where they lived.

“I have never learnt cooking professionally or done any courses in this regard,” says Hilla, explaining that she didn’t dream she’d ever be running a restaurant of her own someday in Udvada.

However, once she had the brainwave of starting an eatery serving authentic Parsi cuisine in the town, things started falling into place and soon, she was living the dream.

In her venture, Hilla was also joined by her son Shezad who had been working overseas as a general manager in the culinary space.

Having always harboured a dream to have a cafe of his own one day, this seemed like a perfect opportunity, and in 2017, he returned to India to join his mum in running Cafe Farohar.

“We had a simple motive,” says Shezad, “And that was to bring a change in the culinary landscape of Udvada and start a space that would allow devotees to experience true authentic Parsi food.”

True to their word, today Cafe Farohar stands as a hub of Parsi food, welcoming devotees who come to the pilgrim spot, and even others who travel miles for a lunch of dhansak and patrani macchi.

At cafe Farohar, there is never a hurry. Lunches here are a sumptuous affair as you take in the aromas of every dish before gorging on these.

As Shezad will tell you, setting up the space brought with it a lot of excitement as well as some learning.

‘Every day we learn’.

The mother-son duo initially had plenty of reservations about how the business would pick up and if they would be able to sustain it. And how the community would respond to this attempt at them reviving Parsi food without the tinge of other versions that are so popular today

“Every dish had to be done to perfection and nothing less,” says Shezad and in time he recalls that this became their selling point. “People began coming here for specific dishes as they knew these would be spot on.”

But the biggest learning, the mother-son duo say, came during the pandemic.

“The cafe shut down, and it was a zero rupee business in those months,” says Shezad, adding that since there weren’t many devotees visiting Udvada, his mother Hilla went back to making tiffins which Shezad would deliver in and around Mumbai and Gujarat under the brand name Farohar’s Kitchen.

“We did not let the pandemic deter our spirit. Though we couldn’t let the venture go forward in its usual style, we continued spreading the love for Parsi food,” says Shezad, adding that even when things picked up and Cafe Farohar was set to start operations, they continued catering at weddings, navjots, etc. as part of Farohar’s Kitchen.

Today, any pilgrim who makes their way to the town of Udvada doesn’t leave before they have a heavy lunch at the cafe. Cafe Farohar has become synonymous with Udvada, and Hilla’s recipes have made this possible.

Over the years the mother-son duo has perfected many specialities and guests can be seen queuing up to get their fill of the sali marghi, atheli marghi, boi fish, the Indian mullet, salli boti, papri ma gosht, and so many other delicacies.

The dishes are priced at nominal rates, ranging from Rs 200 to Rs 400.

While on weekdays Shezad says they serve around 40 guests at lunch, he says the weekends are crazy.

“There is a 45-minute waiting for lunch on weekends and lunch goes on till around 5 pm in the evenings,” he says, adding that they see a turnover of around 245 people on these days.

“Some travel all the way from Mumbai just for a lunch,” he adds.

As Shezad explains, the community and love that they have built over the years trace its roots to one simple reason: “When we use the word ‘authentic’ we mean it. The dish is exactly what it is promised to be and we ensure the taste remains consistent over time.”

He adds that his mother’s personal touch is in every dish and recipe and this sets their food apart from other places.

“We are not doing business here. I’d say instead it is simply a mother-son duo following their passion for food,” says Shezad.

But in spite of building a successful venture, it has been tough. This, Hilla explains is because Parsi cuisine isn’t mainstream and sticking to authentic delicacies is a challenge. “Parsi cuisine is such that you need an acquired taste for it and while trying to preserve our heritage, it is a challenge to ensure people love the food too,” she says.

She adds that they do not feel compelled to compare themselves with anyone.

All they want to make sure of is that in a community, whose numbers are slowly dwindling, they leave a legacy behind.

As our discussions come to a close, it is four in the evening but Shezad calls out to the kitchen telling them they have a customer for their lunch menu.

Asked Shezad about this and he says, “At Cafe Farohar, we never turn away anyone. It is never too late for lunch to be served.”