24-YO Builds India’s First DIY Neuroscience Kit For All Ages, Sells Across 22 Countries 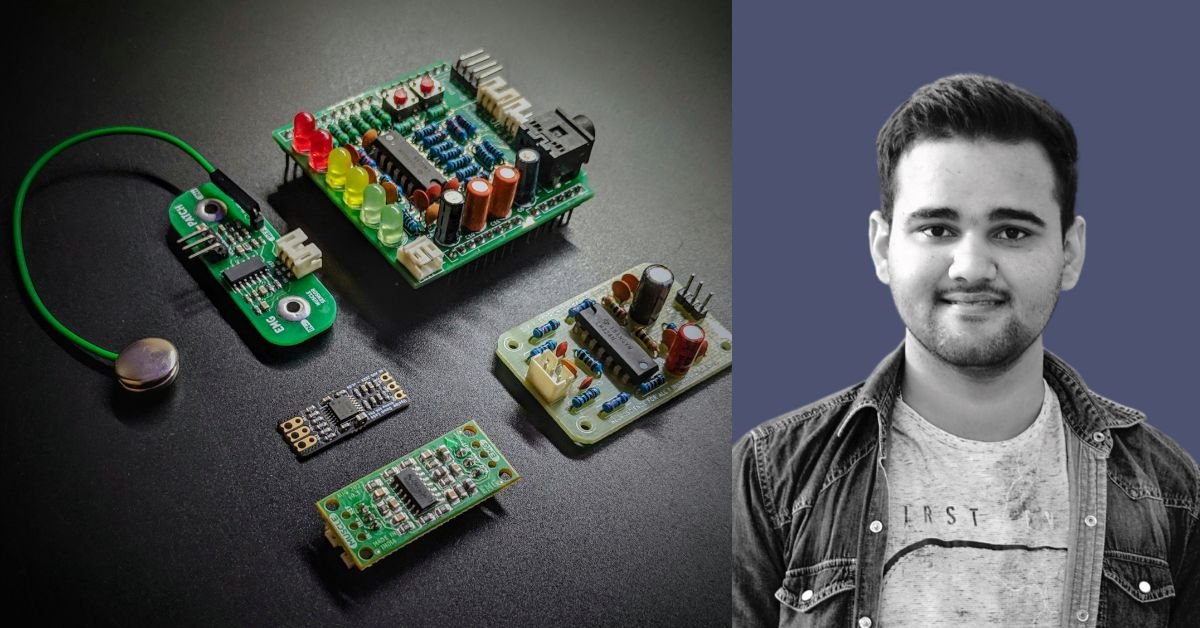 Engineer Deepak Khatri from Delhi launched Upside Down Labs, which has designed India’s first DIY neuroscience kit for students and researchers across the world.

At the age of six, Deepak Khatri started playing around with electronics.

He would break his toys open to check the components inside and how they functioned. By the time he was eight, he had moved onto bigger products like the television sets, opening them up to see and observe their inner workings.

“I loved opening up electronics and checking how they worked. Once I was done with the appliances at home, I began visiting scrap shops. I would buy soldering irons and other products, and open the products and try to see the circuits. I also read magazines with detailed circuit diagrams,” he recalls in conversation with The Better India.

When he was in Class 11, he learnt computer science. Equipped with this additional knowledge, he would play around more with circuits, but it would be another two years before he would discover his true passion.

In 2016, when he was in first year engineering at Netaji Subhas Institute of Technology, Delhi, he chanced upon a TED Talk by neuroscientist Greg Gage, and recalls that his mind was “blown away”.

“In the video, Gage uses a neuroscience DIY kit to control another person’s arm. He connects the kit to two people, and the other person’s arm moves according to the first person’s brain signal. It is an absolutely wonderful video, and sparked my interest in neuroscience,” says Khatri.

Gage is the co-founder and CEO of Backyard Brains, which provides neuroscience kits for students of all age groups. All their information is open-source, which led Khatri to dig into their kits and try building one.

“I saw their hardware schematic online for the circuit and tried making it. However, the material cost was coming to Rs 1,000, which was a lot for me at that time. I then researched the technology for each individual part. I bought the parts for cheaper and made the same circuit at Rs 100. You just need the right tools,” he notes.

This first experiment with neuroscience in 2016 led the 24-year-old to launch a startup called Upside Down Labs four years later. This, he says, is India’s first start-up that creates DIY Neuroscience kits.

“I named it Upside Down as that is how my room looked at that time. I’m also a fan of the show Stranger Things, which has an alternate dimension called the Upside Down,” laughs Khatri.

While in college itself, the biotechnology engineer started working on low-cost designs to make neuroscience kits cheaper.

In 2017, he built a low-cost bio amplifier design that he says can be used for prosthetics and human augmentation. This project won him a prize at his college. Motivated, he went on to sell his first DIY kit on Tindie, an online marketplace, in 2019.

“This was the Bioamp v1, which is an open hardware board that can amplify biological signals like the EEG, ECG, EKG and EMG. I put up two products on the Tindie marketplace. But it took a lot of time for them to sell. Two people bought my products in 2020, and that kept me going,” Khatri says.

In the same year, he participated in Google Summer of Code, which is a free and open-source software coding project, in which participants get a stipend. At this project, he won Rs 2 lakh, which he used to bootstrap his company.

In December 2020, he registered his company Upside Down Labs. The startup’s idea is to make neuroscience accessible to students in India, and develop their interest in the field from a young age. According to Greg Gage, 1 in 5 people are likely to develop a neurological disorder, and we need more people studying about the brain.

“We need more neuroscientists. For this to happen, we have to kindle an interest in children. Neuroscience is not taught in schools and colleges as the equipment is expensive. We have therefore come up with affordable DIY neuroscience kits, starting at Rs 499, so that students and researchers can explore the subject by making projects. Our products can be used by children in Class 6 and above, but those below that age can use it with parental supervision. We also have kept all our research open-source so that everyone can learn,” Khatri explains.

They currently have eight products available, the most popular of which is the Bioamp EXG pill. Using this board, one can record biopotential signals from the heart (ECG), muscles (EMG), eyes (EOG), and brain (EEG), without adding any hardware or software filters. The products are available on the Upside Down Labs Store, Amazon, Crowd supply, Tindie and Mouser.in.

“We started a crowdfunding campaign on Crowd Supply in 2021 for this product and have raised more than $11,400 so far. This product has been sold in 22 countries. Mouser Electronics has also bought this product,” says Khatri.

Rameet Singh, a student, used the Bioamp EXG pill for a project.

“This small device has the capability to measure all biopotential signals. Its compact design makes it very easy to use across different projects. IT can also be used in many applications and designs,” says Rameet.

Khatri, who believes in ‘Make in India’, recalls the challenges he faced while launching Upside Down during the second wave of COVID.

“My idea is to procure everything within India. It takes a bit of time to find good printed circuit board (PCB) manufacturers, on par with China. One product completely flopped as the quality of the components wasn’t good. It also took me time to find good sellers, which happens on a trial basis,” says Khatri.

Khatri also onboarded two co-founders, Bhawna Sehgal and Dikshant Dahiya, in 2021. They have a total of five employees and one intern now. The startup was incubated at IIT Mandi in 2022 and won the Himalayan Startup trek. At IIT Mandi, they have won a Rs 4 lakh grant.

They are now working on DIY electronic kits, plug and play, and trying to get the costs lower for their neuroscience kits.

“We have made the knowledge freely available. We want more students to be interested so that they take up AI robotics or neuroscience. We have already reduced the cost for these kits by 1/10th, and hope to reduce it further. We want to make neuroscience as accessible as possible,” says Khatri.