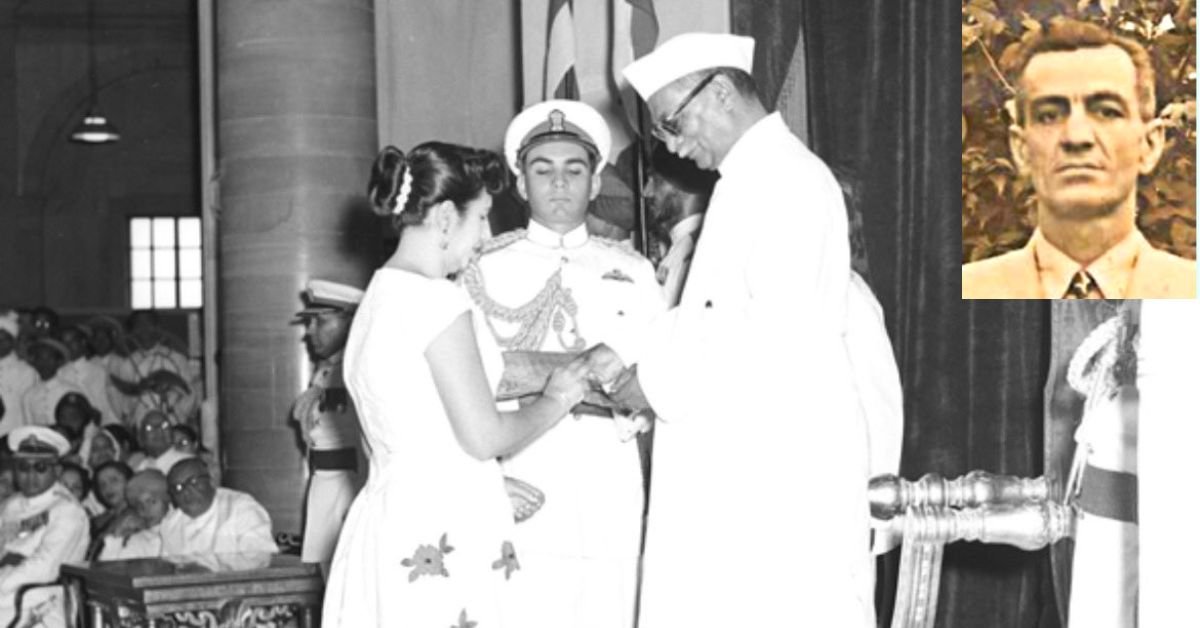 An Anglo-Indian driver of the Indian Railways, Manasser Johannes was posthumously awarded the Kirti Chakra for sacrificing his own life to save 400 passengers aboard a burning train.

On the intervening night of 25 and 26 July 1956, Manasser Johannes witnessed a “sudden block-back of fire from the fire-box door into the cab [driver’s compartment], where he was standing”.

At the time, the Anglo-Indian engine driver was driving the 315 Up Howrah-Adra-Chakradharpur passenger train with 400-odd passengers on board.

Trapped in the flames were Johannes and two firemen who, according to Sudhendhu J Sinha, an advisor to the NITI Aayog on transport and electric mobility, were at serious risk of losing their lives to the raging flames.

“A sudden block-back of fire from the fire box door was growing up in flames. While it had rained the other day, it was all dry that day. Even the rain gods were not merciful,” wrote Sinha in an article for an Indian Railways publication.

The firemen contemplated jumping out of the train. Meanwhile Johannes, also known as ‘Mack’ to his colleagues, was doing everything possible to close the fire box door and contain the fire.

These efforts went in vain, as the fire first engulfed one of the fireman’s trousers. Now, the only option before Mack was to stop the train and prevent the fire from spreading into the other coaches. Making matters worse, however, the fire had damaged the train’s braking system.

While one of the firemen was writhing in pain, the other was pleading with Mack to jump off the train. In response, the driver reportedly said, “You know it is not a goods’ train. It is a bloody passenger train, the most popular one…with 400 pax on board. I will strive till my last breath to kill this fire witch. I wish I could stop the train. The levers seem to be choked to a block.”

Instead, Mack asked the firemen to save themselves first, while he maintained his focus on braking the train. With the cab engulfed in fire, he guided his juniors on how to jump out of the moving train safely. Worried about their senior, they asked him whether he would join them.

He reportedly responded with “Maybe next life. That, too, as a Railwayman. It is a dream of every Anglo-Indian youngster to ride the footplate. We are the railway people. This is our train, you know! Guard Benny Calvert, another one of us, is manning the brake of this train. I am going to stop this train to safety, anyhow.”

Both firemen jumped out of the train, and the fire had begun to totally engulf the cab, while Mack, writhing in pain, remained resolute in his determination to pull over this train to safety.

“The pain was rising and so was his resolve to pull over his train to safety — a predicament that comes only with the highest degree of passion. He took his last sincere effort to apply the brakes. It was all up in flames – orange and yellow with occasional blue streak,” wrote Sinha.

They did not have an inkling of what had just transpired.

Once the train stopped, the “engine was immediately detached, coaches were pinned down and the station informed,” according to Sinha.

Meanwhile Benny, the guard, rushed to help Mack, who had suffered life-threatening burns all over. He was rushed to the hospital for emergency treatment. Sadly, he passed away at the hospital.

“What was left with Benny Calvert was his immaculate uniform with impressions and contours of the charred hands of Manasser Johannes as souvenir, and the memorabilia of the ultimate sacrifice of his brave colleagues,” he added.

For his outstanding heroics on that night, the Anglo-Indian engine driver of the Kharagpur crew base was posthumously awarded the Kirti Chakra in 1957. President Dr Rajendra Prasad handed over the medal to his widow Marjorie and his young son Michael.

As his Kirti Chakra citation reads, “Realising that a disaster must result if he too jumped out, Driver Johannes ramined at his post in the flame-filled cab and though severely burnt, he eventually brought the train to a stop near the outer signal of the Kharagpur station.”

Needless to say, this is what true valour looks like.