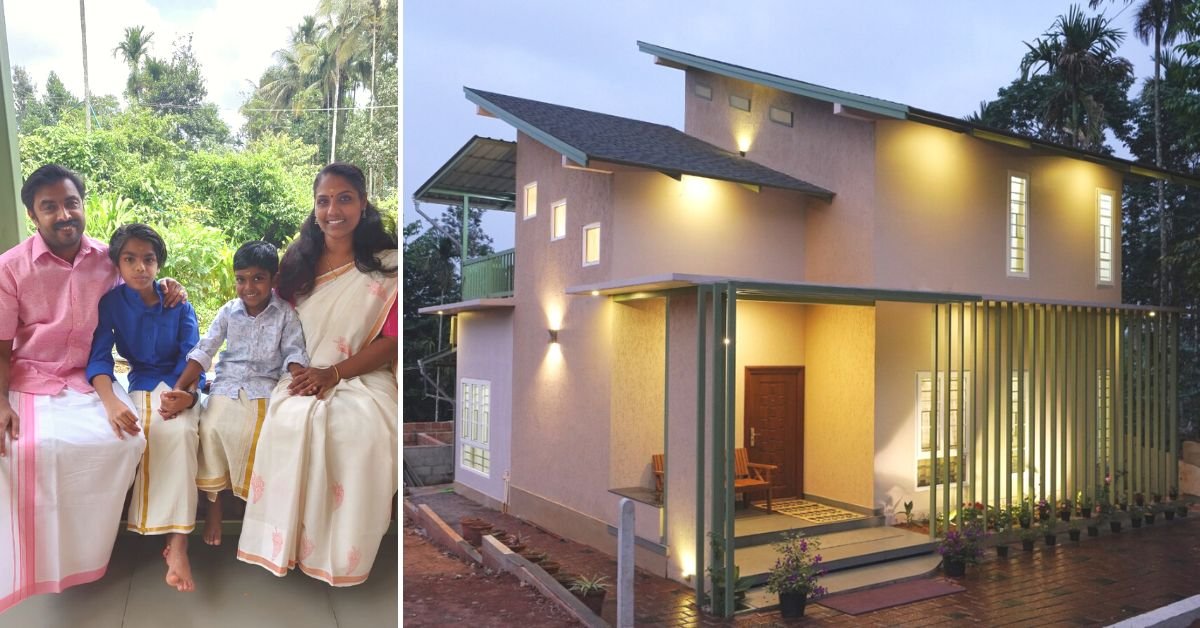 Kerala resident Mobish Thomas built his new family home in Wayanad by employing the Light Gauge Steel Frame Structure, which not only saved him plenty of time and money, but also ensured that his home was eco-friendly and durable.

Building a home requires a lot of time and effort. For Mobish Thomas, a government employee and social worker from Wayanad, things were no different. He recalls that finding enough time amid busy office hours and social work was a major challenge. This prompted him to adopt an alternate and affordable technology to build his house without the usual hassle and the time-consuming construction process.

“The monitoring of the construction process was a major hurdle for me. At the time, we were staying in our ancestral home, which needed renovation before the monsoon. Since we had decided to build a new home, it was rather necessary for us to have it ready in a short span of time, so we could move immediately before the rains began,” Mobish tells The Better India.

He decided to choose the Light Gauge Steel Frame Structure or LGSF — a technology that uses cold-formed steel as construction materials. This, he says, helped him build his two-storey house in just three months, for which he spent Rs 34 lakh.

The 1,440 sqft house, built on five cents of land at Sultan Bathery in Wayanad, stands tall as a model house for those looking for a cost and time-efficient construction method.

“It is also an eco-friendly and sustainable technology as it uses steel, which can be recycled in the future. The construction doesn’t create any concrete debris that pollutes the environment,” he adds.

While conducting research, Mobish found a few firms that specialise in LGSF in Kerala. After contacting them and visiting some of their projects, he decided to work with the ODF Group, based out of Kozhikode, which has been working in this field since 2015.

LGSF, which is not so commonly used in residential buildings, was primarily utilised in constructing commercial ones, says Majid T K, an engineer by profession and founder of the ODF Group.

“To build a conventional concrete house of this size, it usually takes around 10 to 12 months. Whereas, using the LGSF technology, one can finish the job in just three months, under the estimated budget, and with minimum labour,” says Majid, highlighting the fact that Mobish had to employ just two or three labourers for construction.

“Usually, owing to the delay and prolonged process, expenses often cross the estimated budget while building a concrete house. But here, we could stick to the budget till the end,” Mobish notes.

There are several advantages of choosing LGSF over conventional methods, he says. “Instead of using brick and mortar, we use steel and cement fibre boards or panels for the construction. First, we build a steel frame over the foundation, to which we fix the fibre cement boards to build the walls,” he explains, adding that the entire house was built using these boards, which are strong and long-lasting, thereby reducing the usage of cement and other construction materials.

Moreover, unlike conventional structures, these buildings can be easily dismantled without creating any debris, says Mobish. “Also, it is easy to make alterations to the interiors as there is no concrete involved, except for the foundation. The structure is flexible and can easily be restructured in a different location,” he explains.

Majid says, “Steel has a good resale and scrap value. So, even if one plans to dismantle it, they can do it without much labour cost and sell it for good money, which isn’t possible when it comes to a concrete house.”

He adds that when it comes to building houses, safety is a major concern for many being introduced to this technology for the first time. “But these steel structures have high resistance to seismic force (earthquakes) and the boards are fire resistant, thereby making it safer than the conventional buildings,” he points out.

“Also, the walls are built by parallelly fixing two boards. The space between the boards is then filled with a thermal and acoustic insulation material, which provides soundproofing and prevents heat gain or loss,” he adds.

“Wayanad is usually cold and the best part about the house is that it stays warm when it’s really cold outside, and stays comparatively cooler than outside during summers,” says Mobish, who has been living in his new house for the past one and a half years with his wife, parents, and his two children.

According to Mobish, it was challenging to go against the tide and choose an alternate method of construction. “It is often difficult for people to accept unconventional methods, especially when it comes to building a house. It was very difficult for me to convince my family, especially my parents and my wife, who had a lot of doubts and questions regarding the technology,” he says.

“I took my wife to see an ongoing project in Thrissur and convinced her that it’s safe and had several advantages over a concrete house,” he says, adding that after over a year of living here, no one has any complaints about the house.

Another challenge were the pandemic-induced restrictions and lockdowns, says Mobish, who had to stall the construction that was slated to begin in March 2020. “The fibre boards were imported from Thailand and certain materials were bought from cities like Bengaluru and Chennai. The pandemic did delay the process, but we resumed the construction in October and finally finished in December 2020,” he elaborates.

The ground floor of the house comprises a living space, dining area, kitchen, and a bedroom with an attached bathroom. Meanwhile, the first floor has two bedrooms with a common bathroom and an open terrace.

As there are no bricks or any plastering involved, he says, the walls are thinner, which in turn means the rooms are more spacious with extra carpet area.

The flooring has been done using vitrified tiles and the roofs were built using the same fibre cement boards fixed on the steel truss structure. They have laid shingles instead of clay tiles.

“We were particular about lighting and ventilation. Therefore, the windows have been kept broad, letting in enough daylight and good airflow. They have been built using UPVC and the doors are metal and fibre,” says Mobish.

For him, the favourite corner in the house is the mini library beneath the staircase to the first floor.