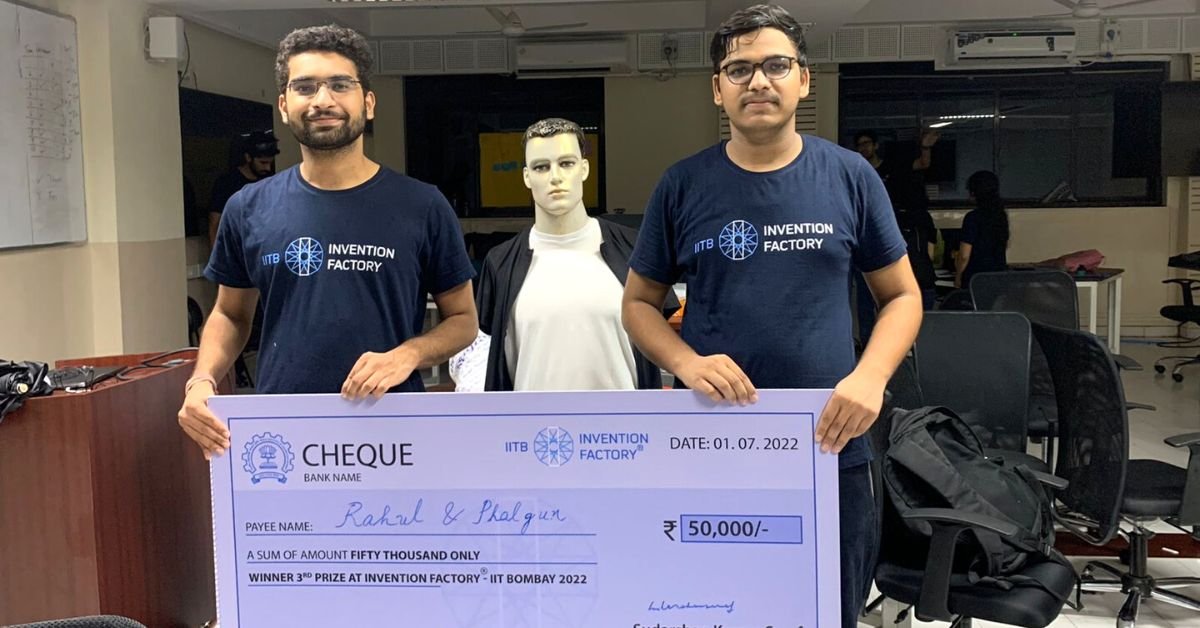 Rahul Bansal and Phalgun Vyas won an innovation contest at IIT Bombay for their temperature-controlled vest that can keep one cool in the summer and warm during winters.

A month ago, when summer was at its peak in Mumbai, Rahul Bansal and Phalgun Vyas were attending the Invention Factory Programme 2022 at the IIT campus in the city.

The students of IIT Ropar and Madras respectively, Rahul and Phalgun were sharing a non-air conditioned hostel room at night and would rush to the comfortable AC hall during the day. This inspired their innovation at the event — a vest that keeps you cool during the summer and warm during winter.

The innovation grabbed the attention of jury members and received third prize in the event, which was attended by 20 selected students from IITs across the country. One jury member even showed interest in investing in their prototype, which has elated the innovators.

“The only mandate for the competition was that the invention should be something that solves current problems. We couldn’t think of a better option than something that will make our body feel comfortable during the extreme summer,” shares Phalgun, a fourth-year dual degree student in BTech chemical engineering and MTech data science from IIT Madras.

The entire process of innovation — including pitching, patenting, and prototyping — was carried out during the six week event.

The first week was reserved for ideation and the remaining five for prototyping.

“We interacted with all the participants during the first week and I felt quickly connected to Phalgun’s ideas. Both of us are so prone to action and have complementary skill sets too. These brought us together and we turned into a team,” recalls Rahul, a third-year mechanical engineering student from IIT Ropar.

Phalgun (20) says, “We felt it would be nice to feel comfortable in one’s clothes no matter what the temperature is outside, and even if one is commuting or sitting outdoors. This was the initial trigger to the thermoelectric cooling vest, in which we can set the preferred temperature manually.”

The innovation includes a switch-enabled device which is placed inside a vest made of cotton and linen. This device uses thermoelectricity combined with a heat exchanger set up.

“When switched on, the vest begins providing either cooling or warmth, as per requirements. We consulted a cardiologist to carefully study body sensitivity so that we can cool or warm strategic parts of the body,” Rahul explains.

He adds, “The batteries used are of low voltage and widely seen in wearables. Moreover, we provided appropriate circuitry to prevent short circuit, overcharging, and discharging of batteries. So the chances of electric shocks or explosions are restricted.”

The prototype comes with a charger, and the device works for over six hours after one round of charging. The innovators say it can provide a maximum temperature difference of 15 degrees Celsius, on both the hot as well as cold side.

He adds, “Problem of heat exhaustion and extreme winter is a common issue all over the world. Through this innovation, we are hoping to help those most affected, like traffic police and delivery personnel. The innovation is user-friendly, power efficient, and lightweight.”

The duo says they were mentored by IIT Bombay professors Amber Shrivastava and Sandip Mondal. They also thank the co-founders of the programme, professor Eric Lima and Alan Wolf from the Cooper Union for the Advancement of Science and Art. IIT Bombay’s Maker Bhavan Foundation provided funding worth Rs 50,000 to each participating team. “A substantial amount of this has been spent in the prototyping, and we have filed a provisional patent in India as well as the US for the innovation,” adds Phalgun.

This innovation is still at the prototyping stage and the founders are hoping to bring it to the market as quickly as possible.

“During the question and answer session in the final round, Rahul asked the jury panel if anyone here would be interested in investing in our idea. One of the members raised his hand and we consider this as a good indicator. We are sure to launch this idea as a product soon, although an exact date can’t be shared,” notes Phalgun.

Meanwhile Rahul, who wishes to pursue automotive building in the future, says, “For me, this was a fresh experience and I thoroughly enjoyed every bit of it.”

Phalgun chimes in, “Even though I’ve headed similar institute level programmes, this event was a game changer for the innovator in me. Having an idea is different from executing it in a short span of time. Together, we made it possible and this will be a great start for us.”

The duo received a cash award of Rs 50,000 along with a certificate for their innovation in the finale held at IIT Bombay on 1 July 2022.