Thanks to One Campaign, This School is One Among Many Helping Crores Beat Menstruation Stigma 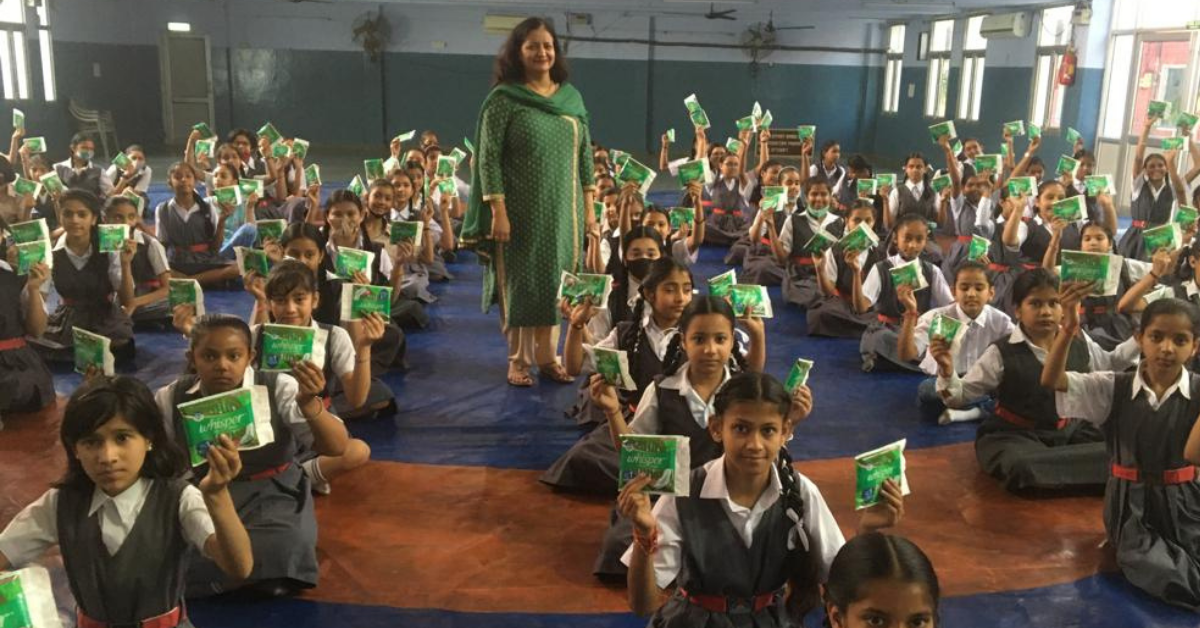 Whisper’s #KeepGirlsInSchool campaign aims to stop millions of girls from dropping out of school due to period taboos. Here’s how hundreds of girls in one school are thriving as a direct result.

This article has been sponsored by Whisper.

‘Period bullying’ is a major contributor to why 23 per cent of girls drop out of school when they start menstruating. Many stay at home to avoid being teased, and due to a lack of awareness and information, their first period is often shrouded in shame and confusion.

“I remember there was a new admission, and on her second or third day in school, she got her period for the first time,” recalls Poonam Sharma, a teacher at Sharda Sarvhitkari Modern Sr Secondary School, in conversation with The Better India. “She was in Class 6. She was so afraid, so horrified. I pacified her and took her to the nursing room, gave her a pad…she really panicked.”

This by no means is an isolated case. In India, ‘period’ and ‘menstruation’ are tabooed words, which means that most young women have little to no information about something that will inevitably happen to them. Only 36 per cent of menstruators in the country have access to sanitary napkins. Others turn to use dirty rags, ash, mud, leaves and soil.

This lack of Menstrual Hygiene Management (MHM) is fueled by a lack of education. To tackle this problem head-on, Whisper, a leading menstrual hygiene brand, has launched the #KeepGirlsInSchool campaign, which has been working toward building awareness of girls dropping out of school post-puberty.

The campaign brings forth ‘The Missing Chapter’ in Indian education. By doing this, Whisper is trying to break this chain and stop 1 in 5 girls from dropping out of school.

“In previous versions of this campaign, spread through the past two years, we have seen that 1 in 5 girls drop out of school after they get their period. Whisper® believes that while awareness and acceptance of hygienic practices can play a big role in achieving 100% menstrual hygiene, one challenge was the ‘missing chapter’ in India’s school syllabus — menstrual hygiene and period education. This could empower girls to know more about menstruation and encourage them to not look at their period as ‘taboo’, thus helping girls be unstoppable even during their period,” says Akhil Meshram, senior director, category leader, Whisper®, Indian Subcontinent at Procter & Gamble.

At Sharda School, this programme has brought with it many changes that teachers, students, and parents alike vouch for.

“When we first started counselling the students with Whisper®, the students were curious. ‘Why are they taking us away from the rest of the class?’ they’d wonder. But we try to be friendly and honest. We tell them it’s just a biological process. When we first asked how many girls had already got their period, most were too shy to raise their hands and speak out. Now we see a lot more hands,” Poonam smiles.

Anjali Kapoor, vice principal, echoes Poonam’s sentiment and says, “Whisper’s school programme has played an intrinsic role in helping us being the guiding force for young students. As teachers, we have learned how to educate the girls better. The hitch that was there earlier has gone.”

‘No matter of shame’

Yashasvi, 14, says that when girls were first made to sit in the hall and told about menstruation, she felt a sense of hesitation. “I wondered why we were here. But the team from Whisper made us very comfortable. They told us we were going to learn about our period. Over time, we’ve learned a lot, down to the basics of how to put a pad on. What I love is that within our friend circle too, we’re able to converse with each other so easily now.”

“We weren’t as equipped to deal with our period before the programme,” she admits. “Firstly, we had no information about the concept. Moreover, we were not provided with sanitary napkins or other materials. The teacher conducting the workshop told us that things were worse in her time, in terms of hesitation and shyness around menstruation. It was treated like a secret or something to mock. Things have changed since then. We know that menstruation is completely natural, and nothing to be afraid of.”

This wave of change is not confined to the walls of the school. At home, mothers and daughters are starting to share open and honest conversations about menstruation and womanhood. As Anjali points out, “Mothers often wonder how to initiate a conversation about growing up and puberty with their daughters. How should they counsel and prepare their girls for when they start menstruating? We saw that some of these fears were alleviated.”

Pooja Bhatt, who has a daughter in the school, says, “My daughter comes home from school and she’s very excited to share what she learned about menstruation. It encourages me, too, to talk to her about how normal and natural it is. The sense of worry has reduced.”

Nancy Rishi, another parent, finds that the campaign has encouraged the parents and teachers to work together to guide the girls. “We’re happy with the way Whisper and the school nurture our girls. We feel happy when we send them to school.” The mother of two adds that her younger daughter, who hasn’t got her period yet, is now aware of what biological changes she will go through in a few years. “They had preliminary sessions with her age group as well. She has learned a lot.”

Meanwhile, Anjali notes that it’s not just the girls who thrive when open and honest conversations around menstruation are encouraged in school. “The boys are also a bit more sensitive and aware,” she says.

She also acknowledges that there is still some distance to cover to make education more inclusive. “It must be the norm that we discuss bodily changes with not just girls, but also boys. There’s a need to reduce the perception that this is a matter of shame.”

This acknowledgement echoes in the way we continue to sell sanitary napkins in black bags and newspapers, with the fear that someone will see the contents within. But with its campaign, Whisper takes a firm step ahead in normalising the word ‘period’, hoping to shape an India where young women are allowed to dream and thrive to their full abilities.