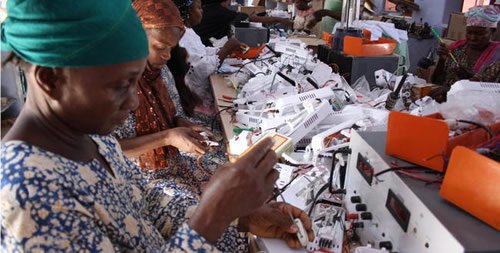 “We can learn things from Africa, and Africa can learn from us”  At 58, Loda Okasia had rarely been out of her village in Northern Uganda.  A mother and grandmother,

“We can learn things from Africa, and Africa can learn from us”

At 58, Loda Okasia had rarely been out of her village in Northern Uganda.  A mother and grandmother, she did whatever she could to get by. But last year her community voted to send her on the trip of a lifetime, all the way to India, to spend six months learning to become a solar engineer.

“We were very proud,” Okasia says. “We learned about solar power and it is now working everywhere here.”

Okasia is one of a growing number of women from across Asia, Africa and Latin America who have participated in Barefoot College’s international solar program. (Read our previous article about Barefoot College.) The women travel to the small town of Tilonia in the desert state of Rajasthan to learn how to be solar engineers, and how to train others to do the same.

Bunker Roy founded Barefoot College in Ajmer, in 1972. He says that there are only two conditions for acceptance to the program: that the women are older than 45, and that they are illiterate.

“Once we train an illiterate woman, they never forget what they’ve learned,” says Roy. “We find that literate women tend to forget because their mind is so cluttered. With illiterate women, we find that when we visit them in their villages after a few months, they haven’t lost their knowledge.”

A grant from the Indian government pays for the women to come to India for six months and learn how to build, repair and maintain solar lighting systems. Their communities purchase the basic equipment at a subsidized rate from an Indian solar power company.

Men are “quite untrainable”

Roy says Barefoot College’s program makes communities more independent. It also elevates the roles of older women. Choosing students between the ages of 45 and 55 – grandmothers in name or in fact – is key to making the program effective.

“We’ve found men are quite untrainable,” he says. “They are restless and ambitious. They want a certificate, and as soon as they get it, they move to cities looking for work. Grandmothers are not interested in a paper to hang on their walls. They stay in their communities. Also, they have the patience to be great trainers.”

The programme was so successful in India that Roy decided to go international.  Since 2005, Barefoot College has trained 200 women from Africa. Those women have brought solar power into 12,000 houses in 160 villages on the continent.

Loda Okasia says that since she has returned to her village, she has been maintaining the 200 solar lanterns that were distributed to her neighbors.  The college’s local partner, the NGO Mifumi, pays her the equivalent of 17 euros a month for their upkeep. More and more people in Okasia’s community are asking for solar technology.

“With it, we don’t have to buy paraffin [for oil lamps],” says Okasia. “Nobody works here. Buying paraffin is not easy. We are happy with solar.”

According to Roy, “the future is south-south cooperation. We can exchange practical knowledge and skills at the community level. We can learn things from Africa, and Africa can learn from us. This is community-to-community knowledge sharing.”

As for Loda Okasia, she says that her only complaint about her training in India was the spicy food. Otherwise, she is happy with her new skills. Now, she says, she wants to build a solar workshop so that she can assemble and repair more solar tools for her village.

Article written by Sara Nics for Radio Netherlands Worldwide (RNW) and has been republished here based on an arrangement with RNW.

Dear readers: If you have come across any such ideas or ventures that you believe we should write about, please feel free to mail us at contact [at] thebetterindia.com.
Also, get positive news delivered directly to your mailbox by subscribing to our e-mail alerts.