While a major portion of India is not easily accessible for differently-abled people living in the country, there have been some very thoughtful attempts which can be replicated for a more inclusive society.

While a major portion of India is not easily accessible for differently-abled people living in the country, there have been some very thoughtful attempts which can be replicated for a more inclusive society.

A large part of our country is inaccessible to India’s differently-abled population in terms of infrastructure. Be it hospitals, movie theatres, schools or even parks – many people living with disabilities cannot even think of visiting such places without being dependant on others, simply because the buildings or public spaces are not equipped according to their needs. But in recent times, voices have been raised and heard about increasing accessibility and creating a more inclusive society. We are not there yet, not by far, but there have been attempts towards an inclusive India and it is time that they are acknowledged, applauded and encouraged so we see many more in the future. As a landmark achievement, the city of Gwalior is now 95% barrier-free. You will see ramps and railings for accessibility and ease everywhere, be it schools, hotels, ATMs, hospitals, etc. It is widely known as the barrier free city or the accessible city of India. The efforts of people behind reaching this stage have also been recorded in an episode of Satyameva Jayate, titled ‘Persons with Disabilities‘.

Indian Railways has always tried to provide some relief and support to the differently-abled persons and senior citizens with the help of wheelchairs and ramps available at the stations. However, there are still many hurdles. Amidst those, The Golden Chariot came up as India’s first luxury train to have a cabin that is friendly for differently-abled people. The train does not charge any extra amount for its use or for any other supportive service.

3. Facilities for people living with disabilities

People often underestimate the little that could help differently-abled people and ease their experiences in certain places. For example, inclusion of disabled-friendly toilets in public and tourist places makes a great difference. From malls to certain institutes, this facility makes public spaces more accessible to persons with disabilities. And as is clear from this brilliant find in the tweet above, there is always a feeling of relief and hope when we spot one. 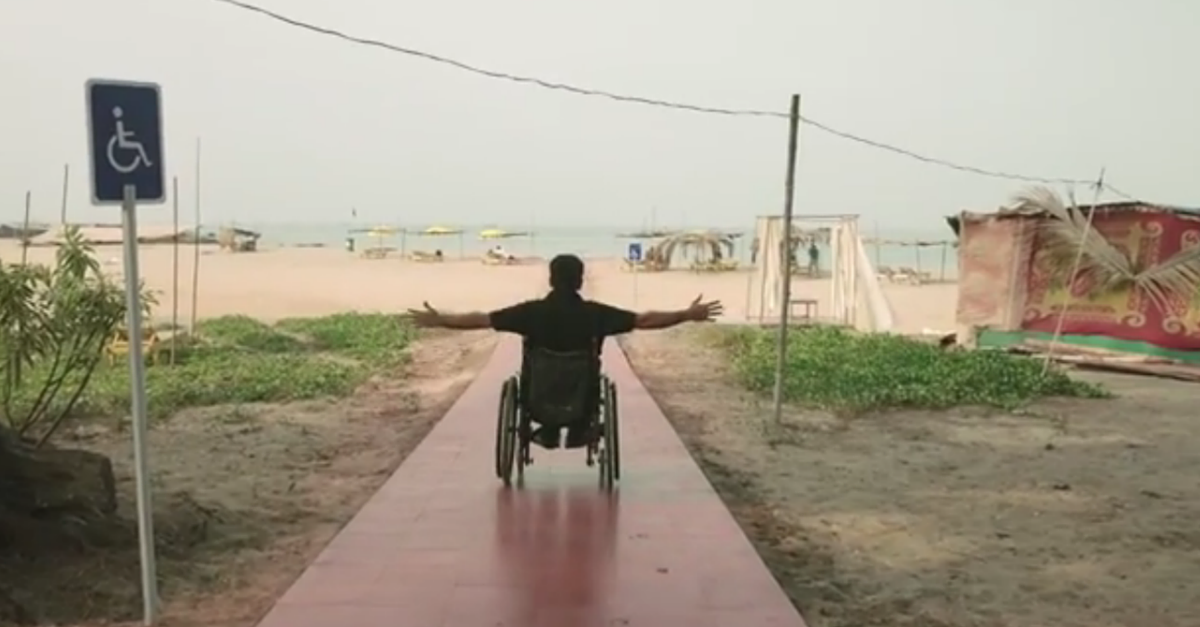 The project was about making beaches more accessible for differently-abled persons so that they could visit on their own terms – in a way that makes them self-dependent. For this, one organization built a temporary ramp that enabled people on wheelchairs to access the Kiri beach in Goa for a day. Though what the project did was temporary, it was a good thought and initiative overall. They also created a video which explored what inaccessibility meant to people. Beyond their attempt at the beach, the Red Ramp Project is also inviting people to a web platform to share images of places which need ramps in India and are requesting people to sign a petition asking for more accessibility. Find the petition and the video here.

5. Travel agencies that are disabled-friendly 6. A Taj Mahal for everyone Though the monument is still not accessible completely because the main mausoleum has steps that wheelchairs cannot climb on, there have been efforts to make it more accessible to the differently abled people. The Taj Mahal now has 9 ramps with optimal gradient installed at various spots in the premises, and they also have a dozen wheelchairs that could be used by differently-abled people.

Don’t they say that little drops of water make an ocean? These attempts inspire us to be more sensitive and tell us that achieving accessibility is not that tough – all it needs is a little thought and a drive to do something about the situation.

Do you know of more such attempts? We’d love to hear about them in comments below.