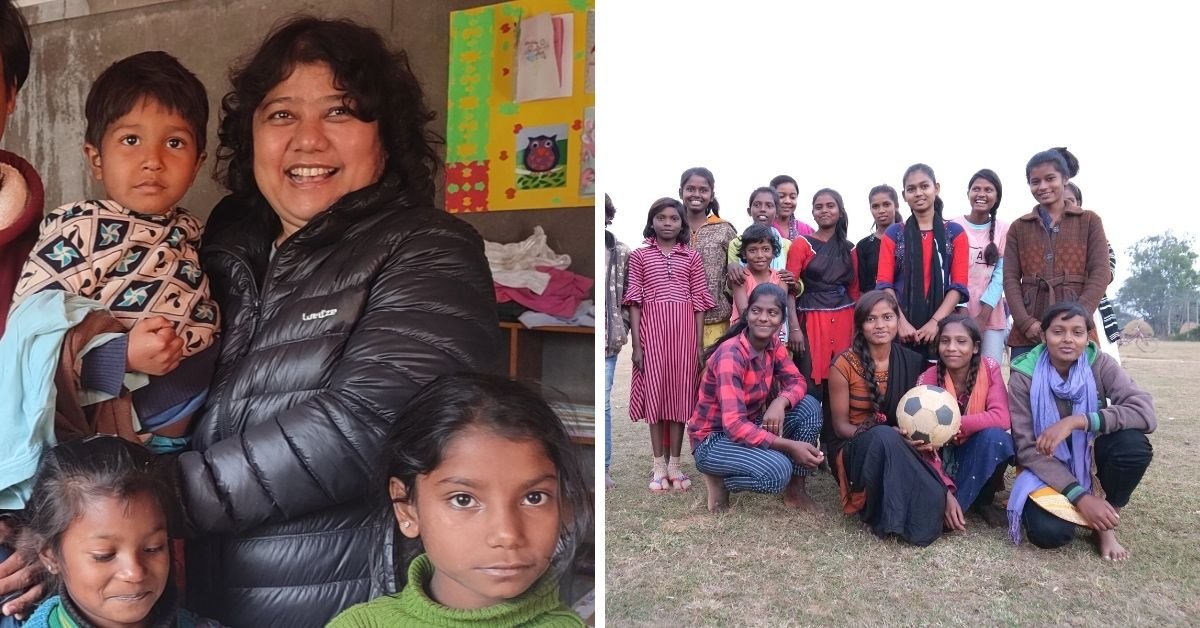 Despite the fact that Jharkhand is one of the states where 47-51 per cent girls are married below the age of 18, a ray of hope comes from Bahoranpur village, where many are attempting to break this vicious cycle.

Their weapon of choice? A football.

Roshni Pradhan and Dolly Aswani, who run the Unbound Futures Foundation, are helping 120 girls from under-resourced backgrounds come together and kick gender bias to the curb.

Roshni explains that in villages like Bahoranpur and other faraway hamlets, schools don’t go beyond class 5. “These villages mainly have government primary schools, so to pursue education, one has to travel to cities like Ranchi or Dhanbad,” she tells The Better India. “It is a terrible situation that results in girls dropping out of school.”

The 52-year-old adds, “Coming from families that are often not too well off makes these girls vulnerable to early marriage and human trafficking.” This is the phenomenon that the organisation is aiming to reduce.

Dolly (25) says that in Jharkhand, football is popular among the youth. “But girls in the villages did not play any games. Our interactions helped us understand how much discrimination they were facing. I thought football would provide a new opportunity,” she says.

“We have identified girls from 12 villages of Hazaribagh district who are undergoing training. A tournament has been scheduled on March 8 for the occasion of International Women’s Day. This is also for fundraising, which will enable the construction of the school,” she says.

Even as the NGO sows seeds of change in Jharkhand, its roots can be traced back to hundreds of kilometres away, in Darjeeling.

Roshni says, “I grew up in Bijanbari village, Darjeeling, where we often saw children of tea estate workers whiling their time away at the riverside, or helping their parents pluck tea leaves as they grew older. One of the reasons they wouldn’t stay in school is the poor infrastructure of these institutions, or that teachers were absent on most days.”

She decided to teach children from such backgrounds — first by going to their homes, and then, as response increased, visiting schools.

Here, she learned a lesson. “The overall development of a child is equally important. Since football is a popular game in the Northeast, I called in a coach to help the children learn and improve their skills,” she says.

With this, around 500 students received training in the sport, and Roshni established Unbound Futures in 2018 to give her cause a formal shape. “Initially, I paid for the training with my savings and earnings from the business I was running. After establishing the NGO, we started receiving sponsors who fully or partially supported the students. Over 150 students have benefited from full scholarships,” she says.

Tamanna Praveen, a resident of Burhanpur, says, “I had never played football before and was introduced to the game by the NGO. A field worker informed me about the initiative and added me to the group.”

The 18-year-old says that initially, the girls received plenty of flak from village residents about engaging in sports. “They questioned and doubted our capabilities. But we did not let ourselves be discouraged. Today, the sport has helped us gain confidence in all aspects of life. I am sure the village will churn out players for the country,” she adds.

In 2020, Roshni roped in Dolly, and together they started the Aangan For All (AFA) initiative.  “This programme is to support underprivileged girls below the age of 18 years,” Dolly says.

She adds, “We are building a school that serves as a platform for all girls from the tribal community to complete their education and develop sports skills. The NGO has received a 1.5-acre piece of land from the Boharanpur gram panchayat to build the centre. The school will offer education to girls from class 6 onwards,” she explains.

Dolly says apart from its two centres in Agra and Bijanbari, the NGO plans to replicate this initiative in other parts of the country as well.

You can help Roshni and Dolly’s cause by donating.