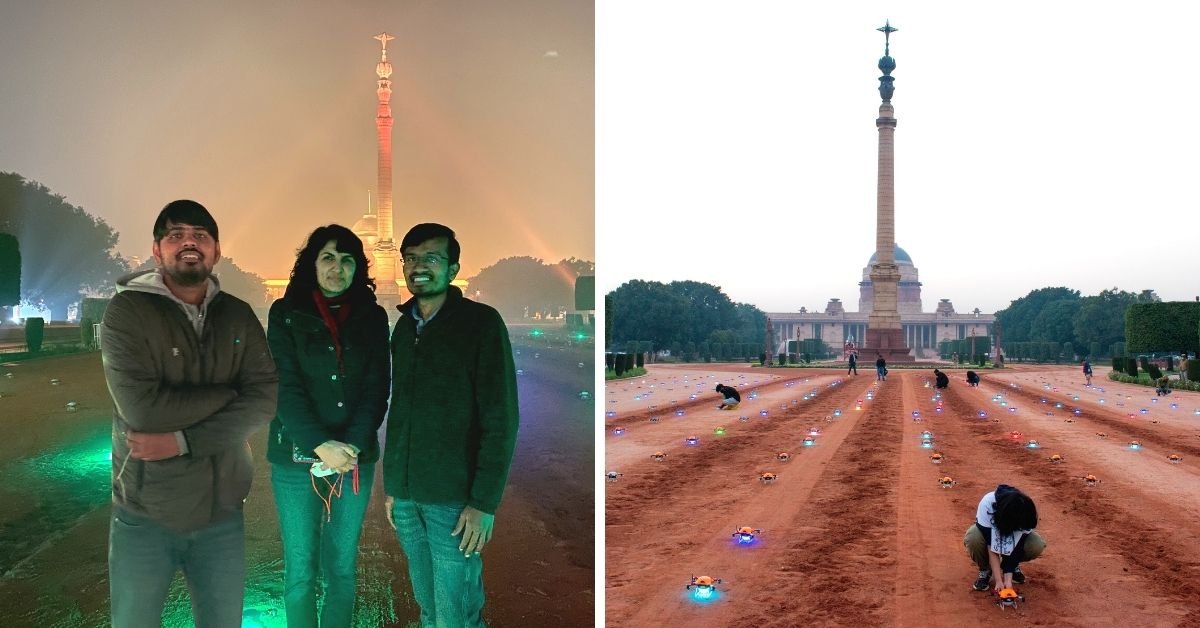 BotLab Dynamics, the IIT startup behind the 2022 Republic Day celebrations, explain how they pulled off a thousand drones filling up the sky during the Beating Retreat ceremony at the Rashtrapati Bhavan

At the Beating Retreat ceremony on Republic Day this year, about a thousand drones filled the sky, providing onlookers with a euphoric view of fireworks, sans the noise and air pollution.

Did you know that all these drones were controlled by a single computer?

The brains behind the realistic projections of the Indian flag, image of Mahatma Gandhi, and more, were Tanmay Bunkar, Anuj Kumar Barnwal and Dr Sarita Ahlawat, founders of start-up BotLab Dynamics.

The trio incorporated the company in 2016 to create drones for the Indian armed forces. Tanmay, an alumnus of IIT Delhi, had been making drones since his first year of graduation in engineering physics, and always wanted to aid the defence force with his work. He laid the foundation of BotLab in 2015, and was soon joined by Anuj, his batchmate.

Meanwhile, Dr Sarita joined the venture a few months later. “They wanted to invest in the hardware sector, and the concept was exciting to me. In India, the software industry flourishes, but there’s hardly any focus on hardware development. I hopped on the bandwagon six months later, and we established the startup in IIT Delhi in July 2016,” she tells The Better India. In 2017, the company received a grant of Rs 50 lakh from the Department of Science and Technology of the Government of India, which set the ball rolling for research and development. A year later, the Army Design Bureau (ADB) selected the team to demonstrate an optimised heavy payload drone at Arunachal Pradesh.

“While developing these drones, Tanmay came across the drone swarm technology, in which multiple drones can be controlled and managed by programming an algorithm,” Dr Sarita says.

She adds that Tanmay found massive potential in connecting multiple drones and swarming them to increase efficiency in agriculture, surveillance, defence, and other areas to reap more benefits.

In 2019, the startup demonstrated a swarm of ten drones to the late Bipin Rawat, the Army Chief in Pokhran. “We also earned an M-prize by the Indian Air Force for swarming ten drones carrying a kilo of payload across a 5 km range. They also had auto-detection of target and obstacle avoidance capability, which impressed the officials,” she says.

Their achievements and capacities helped the startup earn the Prime Minister’s Award and iDEX grant worth Rs 1.5 crore for further research and development, Dr Sarita says.

The startup decided to scale drone manufacturing by setting a target of building 100 drones. However, constructing hundreds of flying machines was expensive. “A GPS imported from abroad costs Rs 40,000 and is an important element to control a drone. This, as well as procuring other elements like flight controllers, turned out to be a costly affair,” she says.

The team then decided to build the drones from scratch and developed all the components themselves. “We built the GPS, which cost Rs 8,000, thus bringing down manufacturing costs drastically. But we faced plenty of challenges in making a flight controller,” Dr Sarita says.

She adds, “The flight controller is the brain of a drone, and it is difficult to get it right in the first attempt. We made 15 iterations to stabilise the drone with the self-built component, which took us a year and a half.”

Dr Sarita says that by 2020, the team of 12 persons could develop a drone that could fly with precision. “The next challenge for us was to develop algorithms and plug-in software to command drones to form patterns. The process involves drawing desired patterns on paper and transferring them to software. These are then animated and fed to a simulator. The design and algorithm programming has to ensure that no drone collides with another, and that each flies to its desired velocity and path,” she adds.

Fruit basket makers to the rescue

With their success in developing the technology, Dr Sarita started sharing viral videos of drone formations on social media. In May 2021, a video of a pyramid formation went viral, and the Ministry of Defence (MoD) approached them to perform for their ceremonial event, she says.

“In June, they asked if we could perform at the Rashtrapati Bhavan during Republic Day. But we had only 100 drones, and demonstrating at a national event would require at least 1,000. We sought loans from the MoD and started building drones for the big day,” she says.

But producing 900 drones within six months posed another challenge. “We build drones using 3D printing technology, and it takes hours to create a single part. To reduce the time and production cost, we reached out to fruit basket vendors from Seelampur and neighbouring areas of Delhi. They helped us build the body parts within weeks and saved lakhs of rupees,” she says. “They also helped us prepare stacks to carry drones that could fit well in a four-wheeler.”

The startup also increased its team to 40 members to manage and operate the drones.

Tanmay says it took the team three months to conceive a theme and execute it for the event. “We wanted to show India’s capability in drone technology to the nation as well as the world. Hence, we included 3D images and moving formations that also looked attractive. After finalising the theme, we started testing in small batches,” he says.

He adds that the drones were programmed with over 20 safety parameters considering the security concerns for the event. “We were operating in the VVIP area, and there was no room for any incident. Hence, we programmed multiple safety features to ensure that drones did not divert beyond a certain distance with geofencing, landed in case of malfunction, or collapsed if the sensors failed,” Tanmay says.

Rigorous testing and hundreds of hours of practice, learnings, and iterations helped the team display the spectacle on January 29.

The startup plans to scale up drone manufacturing to 2,500 and, eventually, to 3,500. “China and Russia have more than 5,000 drones, and we wish to set a world record and become part of elite countries that have this technology. We have received inquiries from Nepal, Bangladesh, Sri Lanka, and Burma for commercial performance. Moreover, swarm drones can save precious human lives of soldiers at the border,” he adds.

Dr Sarita says that the mega event shows how a cost-effective technology can develop in a short span and deliver promising results.